Government has awarded a mining licence for Makanjila heavy mineral sands (HMS) deposit in Mangochi to a Chinese firm, New Kin International Ltd, which is ready to invest US$78 million to develop the mine.

But the action has sparked outrage from members of the civil society who have berated the authorities for cloaking the deal in secrecy, a practice which they say counters tenets of good governance.

Responding to Mining & Trade Review’s e-mailed questionnaire to Minister of Natural Resources, Energy and Mining Aggrey Masi, Director for Department of Mines in the Ministry, Jalf Salima, said the Department recommended the granting of the mining licence to the company on November 10, 2017 subject to the approval of an Environmental and Social Impact Assessment (ESIA) report.

The application went through an Inter-ministerial licencing committee for scrutiny, which  in turn recommended the carrying out of ESIA whose report is pending submission to the Environmental Affairs Department (EAD) for the National Council on Environment (NCE) nod, before ESIA Certificate that necessitates the granting of the Mining Licence, is issued,

The project which is estimated to span about 25 years of mine life is poised to create 357 direct employment opportunities and will involve an open pit method of mining, producing heavy metals concentrate comprising rutile, ilmenite and zilconite; using a concentration plant.

As for Community Development Agreement (CDA) which is stipulated by the yet to be passed Mines and Minerals Bill (MMB), Salima explained that once the bill is enacted into law, every large-scale mining company will have to come up with a CDA, including those whose licences were granted before the new law.

Further, he disclosed that government made a recommendation to the Chinese-owned company on Corporate Social Responsibility (CSR), which is printed at the back of every licence, as a condition of the licence.

CSR is not mandatory by law but companies are encouraged to implement it as good corporate citizens to obtain a social licence. Take note that CSR forms part of the ESIA and is also stipulated in the licence application documents,

But, speaking in an interview with Mining & Trade Review, Natural Resources Justice Network (NRJN) Chairperson Kossam Munthali said that in as much as issuing of a mining licence is significant for the economy of this country, transparency in mining contracts awarding process is as important.

He said it is disheartening to note that despite all the advocacy and donor funded projects aimed at reforming the management of the mining sector, threat of vice still exists due to these secret dealings.

This behavior lead us to question the motive behind resistance to reforms by government officials handling these issues. Why do they want the status quo to remain   despite all the funded-training, advocacy and pleading efforts to promote transparency that have been exhausted? Your guess may be as good as mine, which is really very unfortunate,

He explained that what is worrying is the fact that government has not made public terms of contract agreement, let alone publicised the licence awarding process, neither has open public consultations been held. 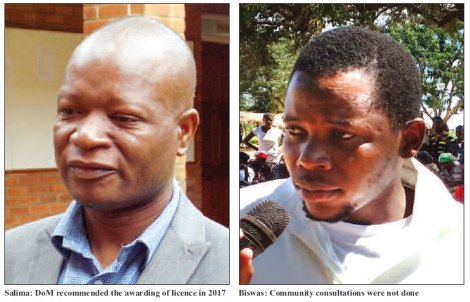 Biswas Ismael, Programs Officer (Extractives) for Quadria Muslim Association of Malawi (QMAM), a faith organization that advocates for good governance and carries out community sensitization campaign on mining issues in the area said it is unfortunate that his organisation was not invited to any meeting that discussed the project.

And we are not aware of any representatives from the community who attended consultations a part from one Sub Traditional Authority (T/A) Lulanga who was invited to a brief meeting. Stakeholders such as civil society organisations like us who operate in the area and even the Area Development Committee (ADC) members, were not involved,

Salima could not explain why the whole process was shrouded in secrecy only insisting that consultations were done with the communities in the area throughout the exploration phase and during the ESIA process.

Mining & Trade Review investigations indicate that communities in Makanjila area know about the pending mining activity but there is ignorance about any sensitisation meetings having taken place.

The ‘secret’ awarding of the HMS licence in Makanjila enclave has been shrouded in the same controversy that has, for long, triggered public mistrust of mining sector dealings, pitting government against CSOs advocating for good governance, with the latter accusing the former of dragging feet in addressing loopholes because some of its officials are benefiting from the porous system.

Despite all the mishaps, government has just completed a five year Mining Governance and Growth Support Project (MGGSP) which was designed to introduce reforms in extractives sector aimed at ensuring transparency and   accountability.

The objective of the project co-financed by US$25million loan from World Bank’s International Development Association (IDA) and a 4.5 million Euros grant from the European Union (EU) is to improve the efficiency, transparency and sustainability of mining sector management.

Government is also taking strides towards compliance to standards of the Extractives Industry Transparency Initiative (EITI) after State President Arthur Peter Mutharika made a public declaration in his maiden state of the nation address for Malawi to join the global initiative.