Adams heads up the largest female grouping of miners in the country that was established almost 15 years ago. She indicated that the members of MAWIMA are

determined to develop our industry to improve rural livelihoods.

The Malawian FDH Bank supports small and medium-sized enterprises (SMEs) in Malawi and signed a memorandum of understanding with the then Ministry of Mining (now Ministry of Natural Resources, Energy and Mining) to promote and empower ASM in Malawi. Madinga hailed FDH as “not an ordinary bank” as it supports the SME sector to “grow with us”. It is doing this through capacity building, technical support, promoting investment, and providing access to capital and markets. Madinga called on the miners present to integrate the rights of children into their businesses – children should not work but go in school.

Principal Secretary in the Ministry of Natural Resources, Energy and Mining, Ben Botolo, presented Muluzi to officially open the Symposium. Muluzi asserted the importance of mining to diversify Malawi’s economy and that the outcome of the deliberations should mark a turning point in ASM for sustainable development,

We need to transform the ASM subsector from an informal to a formal footing.

Muluzi indicated that Malawi will hold its first international mining indaba in 2015; this mining meet was initially pencilled in for September 2014.

Muluzi presented some of the objectives for ASM; all operators need to be licensed with regular monitoring of operations, value addition needs to be promoted, a formal market should be established, especially for gemstones, and ASM needs to comply with health and safety, environmental, and accountability and transparency standards. He called for the curtailing of illegal mining and smuggling of stones and for ensuring that Malawian gemstones can be traced on the international market.

At the #Malawi Mining Symposium with Hon. Atupele Muluzi, Minister of Energy and Mining pic.twitter.com/zau1uJ0lQZ

Muluzi indicated that the event was initially to be opened by the Vice President, Saulos Chilima, signalling the importance of ASM in Malawi. However, the Vice President travelled to Zambia earlier in the week to attend the funeral of the late Zambian President Michael Sata. Muluzi called for a moment of silence to remember Sata at the Symposium.

Following the opening speeches, Karen Hayes, Director of Mines to Markets at Pact, and Charles Kaphwiyo, Director of the Department of Mines, presented on ASM globally and in Malawi, respectively.

Hayes was invited to Malawi to provide guidance from her vast experience working in ASM across the world and in particular in sub-Saharan Africa (see Pact’s work in natural resource management in the Democratic Republic of the Congo, for example). She defined mining as the “unsustainable extraction of non renewable resources” and as a result she emphasised that “we only get one chance to do it right”.

ASM is a crucial business for many people and through ASM most minerals and metals can be processed, according to Hayes. She explained that across the world there are 30 to 50 million people working in ASM. Industrial mining produces 90% of the world’s minerals but only represents 10% of the workforce in the mining sector. In contrast, ASM’s output is only 10% but 90% of the workforce in mining are in the ASM sector. Half of these people are women.

Artisanal mining is characterised as manual, inefficient and informal, with little formal prospecting and poor recovery rates, while small-scale mining has more mechanisation, greater efficiency and recovery, is governed by different regulations and will have an investor with resources rights and responsibilities.

Hayes called on policy makers to beware of formalising mining without formalising trading to ensure market access rather than encouraging back-door deals (there are many examples of formalising ASM going awry and not protecting the most vulnerable, see the International Institute for Environment and Development’s recent post). Nonetheless, Atupele’s call for formalisation seems to be the primary message some of the media houses took from the event.

Hayes also underlined that while there are many social and developmental issues to consider, at its core, mining is business. She noted that the miners participating in the symposium were “losing money just by being here”. Thus, it needs to be profitable and viable for people to participate in a formalised ASM sector, otherwise miners and traders will remain outside of the system.

In Malawi, there are approximately 3000 people in the ASM sector although it is hard to quantify (and the Ministry has also given 22,000 as the number of miners in this sector in the past). Kaphwiyo highlighted that the potential of the ASM sector is to contribute to socio-economic development and poverty alleviation, to the Gross Domestic Produce and to foreign exchange in Malawi, and, to stand against the tide of rural to urban migration. However, he noted the following challenges that the Department of Mines is committed to addressing:

Outside the conference hall at the Sogecoa Golden Peacock Hotel (a company interested in Malawi’s natural resources too), artisanal and small scale miners displayed their products and demonstrated how some extracted materials are processed. 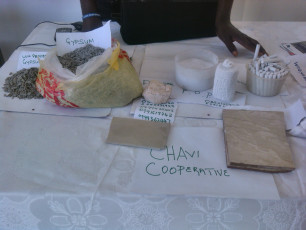 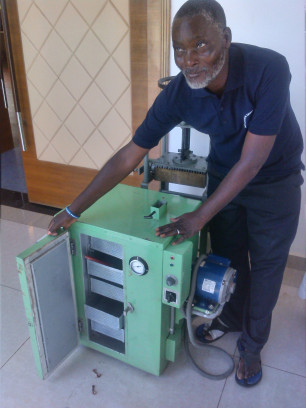 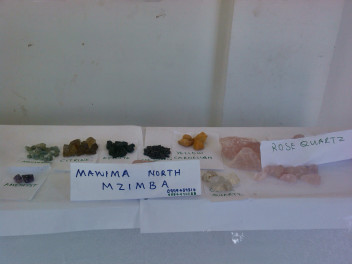 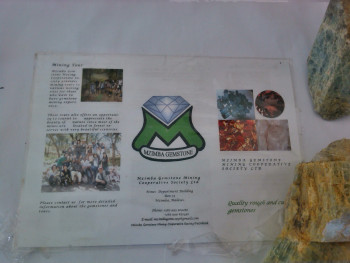 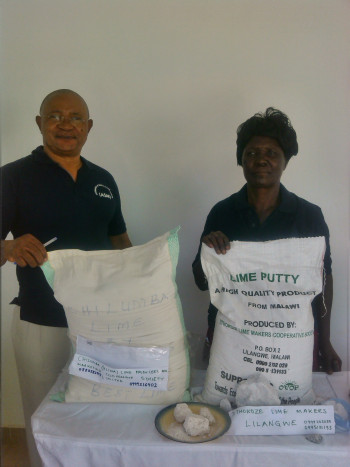 After lunch, Mr Mbewe, a representative of artisanal and small scale miners, took the floor to discuss the importance of diversity in the sector, “sandstone is as important as gemstones”. He asked policy makers to include ASM in the Mines and Minerals Act that is currently being reviewed, and drilled home the point that Malawians should be the ones to benefit from ASM.

After these different perspectives were given space at the Symposium, Regional Mining Engineers from the South and North, Eliya Saiti and George Maneya, along with the Deputy Director of the Department of Mines, Atileni Wona, presented an overview of the draft Artisanal and Small Scale Mining Policy.

The goal of this Policy is to contribute to economic growth and poverty reduction in Malawi through sustainable ASM activities.

Day 1 concluded with a question and answer session. Paramount Chief Kyungu of Karonga asked what the government is doing about environmental degradation. Mzimba North Member of Parliament Agnes Nyalonje noted the lack of consultation of parliamentarians (the Parliamentary Committee on Natural Resources and Climate Change heard about this meeting through a press release in the paper). She also highlighted that there are at least 23 laws that affect mining activities in the country – is the government reviewing all of these? District Commissioner for Karonga, Rosemary Moyo, questioned the absence of local government in the draft policy because when conflicts arise between a company and communities the District Commissioner has to step in. Several miners expressed their dissatisfaction with the speed at which licences are issued – it was said that sometimes miners apply for a 12-month permit and they receive it after 11 months so only have 1 month left on that permit.

Kaphwiyo said that environmental degradation is a concern for both large scale mining and ASM and that we have a “responsibility to our grandchildren”. He went on to explain that legislation does not favour ASM at present, but the Mines and Minerals Act from 1981 is currently under review. He noted that devolution is required so that District Councils and traditional authorities are included not only in managing conflict but also in the implementation of mining projects.

The second day commenced with reflections and then Hayes took the floor to discuss access to markets for ASM minerals. 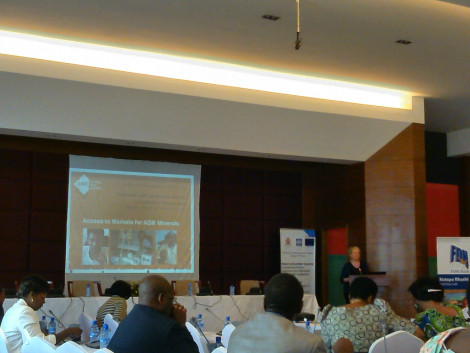 Hayes presented the following points for consideration in the ensuing discussions around the ASM draft policy.

Following Hayes’ presentation, Crystall Nel of the Gemological Institute of America (GIA), based in South Africa, and Stabene Madamanja of FDH Bank presented the services provided by their institutions. Nel introduced the training opportunities and scholarships available for gemologists and prospective students in Malawi. Cooperatives and associations in Malawi were invited to apply for a grant for group training; GIA works with universities in Tanzania (see here), Kenya (see here), and Zambia (see here) to provide training for miners in ASM.

Following another question and answer session, participants split into four groups to discuss the four policy priority areas (1. Mineral Development, 2. Investment Climate int he Minerals Sector, 3. Environmental Management, and 4. Socio-Economic Issues) of the draft policy. These will feed into the final policy. We will continue to cover this as progress is made towards finalising the draft.

The following list includes news articles that covered the event (primary focus of these is Muluzi’s opening address):