The piece “Editorial: Malawi needs sound policies to nurture local industries” featured below was initially published in Malawi’s Mining & Trade Review Issue Number 37 that is circulating this May 2016.

The full edition is available for download here.  This monthly publication is edited by Marcel Chimwala.

It is sad that the local cement industry is under threat from competition it is facing from cement being imported from neighbouring countries.

Likewise, the coal industry which is equally a large employer is collapsing due to similar reasons. Due to laxity of government policies, many coal consumers are opting to import coal from Mozambique leaving out stockpiles of the locally mined coal.

Sad still, government has added salt to the wound on the cement front by issuing licences to cement importers to permit them to haul into the country up to 25% of the total cement requirements.

Minister of Trade and industry Joseph Mwanamveka and the Ministry’s spokesperson Wiskes Mkombezi say granting of the licences is a means of regulating the cement industry to encourage competition and ensure fair prices to consumers.

While competition is very important in a free market economy, we believe Malawi has not reached the stage where by its local industries can compete with imported goods on equal footing.

Just to agree with what an Executive Member of the Malawi Chamber of Mines and Energy, Grain Malunga is saying, Malawi’s cement industry is still in its infancy.

Local companies such as Cement Products Limited and Shayona Cement Corporation are struggling to access investment capital and attract favourable taxation from government in order to expand their investments and it is very unfair for the government to expose them to full-throttle competition with regional established companies that can deliberately lower prices to kill the local cement industry.

The government should also consider that local cement companies including La Farge, Shayona and Cement Products employ a lot of Malawians at their factories and limestone prospecting and mining investments.

It would, therefore, significantly add to Malawi’s burgeoning unemployment rate if these companies downsize their workforce due to market challenges brought by the imported cement.

We find his statement unfortunate because Malawi is a sovereign state so it is incumbent for its government to prioritise local benefits before international obligations.

In this vein, we call upon the government to seriously regulate the cement industry to ensure that imports are reduced and create a more conducive environment for local investment.

Malawi has reserves of limestone, which is the main ingredient for cement production, in a number of areas in the country notably Bwanje Valley in Ntcheu, Chenkumbi in Balaka, Wimbe in Kasungu and Changalume in Zomba. In the coal front, Malawi has a number of coal fields in the north and lower Shire Valley area.

Surely, sustainable utilization of these resources will enable the country save foreign exchange through import substitution and it is absurd for the government to pursue policies that promote imports other than utilization of these local resources as no country in the world has developed because of imports.

Malawians will recall that during Kamuzu Banda’s reign, Malawi seriously nurtured its industries and it was during that time when unemployment was low with big employers such as Portland Cement and David Whitehead having their mark.

It is, therefore, high time the government revisited its policy as far as regulating the industry is concerned and save the collapsing coal industry and the crying cement industry. Controlling the influx of imports will also help the country save foreign exchange and avoid the scenarios of recent times when Malawians had to pass the night queuing for fuel due to low supply emanating from forex shortages. 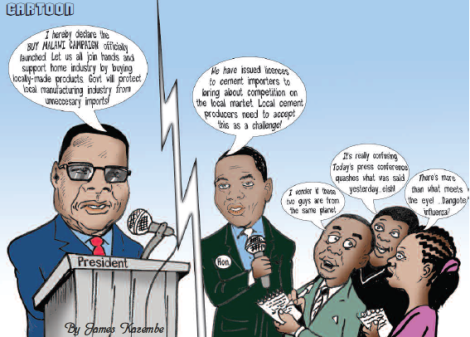