Last week, Malawi received the news that its application to join the Extractive Industries Transparency Initiative (EITI) had been successful. Malawi is now an EITI Candidate Country and has 18 months to produce the first EITI report which will include information on production, revenue, taxes, social expenditure, royalties, among others, from the extractives sector. This will include minerals and may extend to oil and gas and even forestry. A scoping study is currently underway to determine which resources will be included at first.

To celebrate, the MWEITI Secretariat, housed in the Ministry of Finance, Economic Planning and Development’s Revenue Policy Division, held a cocktail at Capital Hotel, Lilongwe, for interested stakeholders. Grain Malunga, a mining expert, spoke on behalf of the private sector and the Malawi Chamber of Mining and Energy, confirming the industry’s support for the initiative and expressed his hope that this will ensure Malawi does not fall prey to the “resource curse”.

Elyvin Nkhonjera Chawinga and Rachel Etter-Phoya represented civil society in their celebratory remarks, noting the trust already built between stakeholders in the multi-stakeholder group which comprises government, industry and civil society. They also called on this group, of which they are part, to ensure that contract transparency and beneficial ownership are implemented as two voluntary EITI requirements and that oil and gas is included from the beginning even if production has not commenced.

Matthias Rompel, Country Director of GIZ, a long-time supporter of the EITI in Malawi, expressed his delight in Government’s commitment to join the EITI and the importance of this to Malawi’s public financial management and use of resources for this generation and those to come. The speeches were concluded with the key address by the Director of the Revenue Policy Division, Crispin Kulemeka, which is available below. 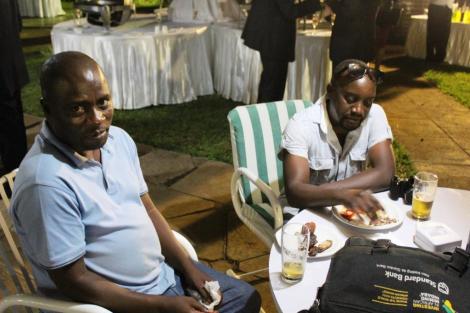 Marcel Chimwala, Editor of the Mining and Trade Review 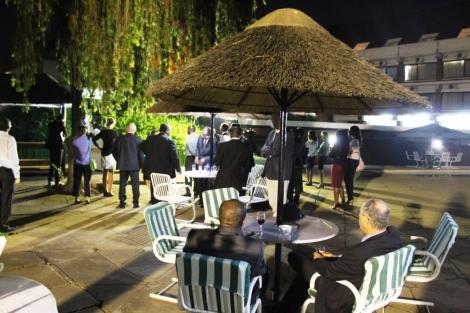 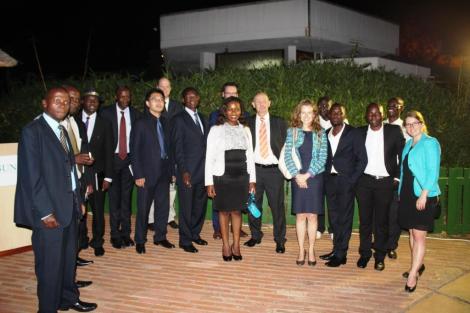 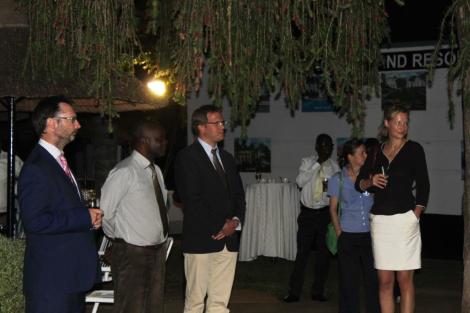 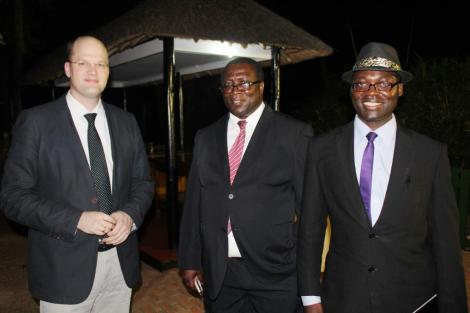 Members of the civil society,

Members of the private sector,

Members of the Press,

It is my singular honour to stand before you tonight as we celebrate the good news that earlier on today, the Extractives Industries Transparency Initiative (EITI) Board met in Berne, Switzerland, and made a momentous decision to accept Malawi as an EITI candidate country. So, our gathering this evening is to recognise the progress we have accomplished together so far. Many of you will agree with me that we have come a long way to reach up to this point.

But before I proceed, allow me to pass sincere apologies from the EITI Champion, the Minister of Finance, Economic Planning and Development, Honourable Goodall Gondwe, who could not make it to be here with us during this historic event due to other pressing Government business requiring his attention. As such, he requested me to stand in for him and also to inform you about his excitement about this good news coming from the International EITI Board on approving Malawi’s application for candidature. He has also sent his congratulations to the team that has been behind this success.

Allow me to give you a brief background to the EITI process in Malawi.  As some of you may be aware, the talk about EITI began around 2008 in Malawi, and there have been a lot of activities since. Yet at some point, the process seemed to drag. However, as soon as the current administration took office in June 2014, a public commitment was made to join the EITI. His Excellence, President Arthur Peter Mutharika announced during his inaugural state of the nation address in June 2014 that Malawi would sign up to the EITI.

The reason for this decision is because we believed, and we still believe, that the EITI will improve the management of the country’s natural resource wealth, including minerals, oil and gas and forests. These may not all be included at the beginning of the EITI process, but it is our aim to see all natural resources included in the future in order to enhance the outcomes of exploiting these resources for Malawians today and tomorrow.

In case some of you may still be asking what the EITI is all about. It is a global transparency standard that was launched over a decade ago following a civil society movement to promote open and accountable management of natural resources.  It seeks to strengthen government and company systems, inform public debate, and enhance trust.  As you may anticipate, a play of these highlighted issues is vital for the natural resources sector to flourish in addition to enhancing transparency and accountability in use of public resources.

Before a country can be accepted as an EITI candidate, it is required to fulfil certain requirements, including making a public announcement of the country’s intention to join the EITI, appointing an EITI Champion, establishing a Multi-Stakeholder Group, and establishing an EITI National Secretariat. Malawi complied with all the four sign-up criteria: the public statement to join EITI was made, the Minister of Finance, Economic Planning and Development was appointed as the Malawi EITI (MWEITI) champion, and an independent EITI Multi-Stakeholder Group was established.

Furthermore, an interim EITI National Secretariat housed in the Revenue Policy Division of the Ministry of Finance, Economic Planning and Development was also established. The MSG group is responsible for overseeing the implementation of the EITI, and is supported by EITI National Secretariat. This was done towards the end of last year when the Government, the private sector and civil society selected the institutions, companies and organisations to be represented on this Multi-Stakeholder Group. And so far, we have seen commitment across the three constituencies forming the Multi-Stakeholder Group which is very encouraging to us.

In order for Malawi to implement the EITI Standard and to become compliant to the initiative, we will be required to disclose information on tax payments, licences, contracts, and production, among other key elements around resource extraction. Natural resources companies will also be required to disclose the payments they make to the Government. This includes; taxes, royalties and rents. This information will be disclosed in an annual EITI report – and our first one is due within 18 months from today.

As we speak, a scoping study is underway, which is being led by independent consultants from Germany and Malawi. The study is intended to assess and determine which natural resources and which companies should be included in this first report. Many of you have been or will be involved in consultations for this.

At this point, let me emphasize that these EITI reports will be a useful tool for all Malawians to see how we are managing the country’s natural resources, and how much revenue is being generated. We hope this information will stimulate informed and evidence-based dialogue on ways of how best to utilize our finite and non-renewable natural resources to meet our national priorities, outlined in the Malawi Growth and Development Strategy II. It is therefore a great honour for all of us as Malawians for our country to have received approval to join the EITI as a candidate country as we now join 48 other countries, which are already part of the EITI, including all our neighbours, the USA, UK and Germany.

However, our success today has not taken place in a vacuum. There have been a number of stakeholders who have worked tirelessly to ensure the country is accepted as an EITI candidate. For this reason, I would like to specially recognize and commend all the stakeholders. Accordingly, we are appreciative of the technical work of the former EITI National Task Force, the EITI Multi-Stakeholder Group, and the EITI Secretariat throughout the process. We are also appreciative of our Development Partners, who have played a crucial role in funding EITI related activities in the country. Special recognition goes to GIZ for its unwavering technical and financial support towards this process. We are also grateful to the Norwegian Embassy and the World Bank for their financial and technical support rendered throughout. We believe that this working relationship will continue and that other Development Partners will also consider joining in the process of the EITI implementation.

We are also appreciative of the continued support we received and continue to receive from the International EITI Secretariat. They have made life easy for us up to this point, and they share this joy with us. Finally but not least, we are grateful to Citizens for Justice for the remarkable work they did throughout the process in advocating for EITI.

Let me conclude by informing you all that the Multi-Stakeholder Group and the interim National Secretariat have developed a work plan for the next two years to move Malawi from a candidate country to a compliant one. The real work of implementing this plan to make the EITI a reality in Malawi starts now. We are therefore relying on the continued commitment and diligence of the MSG group and all other stakeholders involved and/or interested in the prudent management of natural resources in Malawi. We will hold an official launch for Malawi EITI, or MWEITI as the initiative will be known in Malawi, early next year.

Let us remember that after the celebration this evening, there is more work ahead of us. And as we have been doing, we will continue to work as a team and with diligence to ensure that the country benefits from joining the EITI.

I thank you for paying attention!