The piece “Malawians engage experts in mining and human rights round table discussion: as panellists clear misconception over mineral sample exports” featured below was initially published in Malawi’s Mining Review Issue Number 24 2015 that is circulating this April 2015.

A cross section of the Malawi community had a rare opportunity to engage mining experts on topical issues rocking the growing minerals sector during a live public discussion on Zodiak Broadcasting Station that was held on March 20, 2015 at Crossroads Hotel in Lilongwe.

The event was organised by non-governmental organisations that included ActionAid Malawi, Citizens for Justice (CFJ) and Centre for Environmental Policy and Advocacy with funding from Tilitonse Fund.

In the live programme, the panellists answered questions from members of the audience and also listeners of the popular radio station who sent the questions to the moderator of the discussions, Veteran Broadcaster Owen Lupesya through text messages.

The questions at the public discussion held at Crossroads Hotel in Lilongwe, therefore, focused much on the quantity of mineral samples that are legally acceptable for analysis as well as the experiences and expectations of the general public relating to mineral exploration activities.

The experts who included representatives of the Ministry of Natural Resources, Energy and Mining, nonetheless, cleared misconceptions surrounding how    mineral samples are collected and exported for analysis.

Explaining to the audience, Commissioner for Mines Mr. Charles Kaphwiyo said that it would be difficult for government to come up with a quantified tonnage of samples that an investor should take for analysis, because “different minerals require different uptake of samples.”

For instance, coal is found in one large rock and requires a small amount of sample for analysis while in the case of niobium, huge amount of samples are required because from, for example, 40 tons of sampled soil, only 0.05 percentage could turn out to be valuable,

Kaphwiyo took time to enlighten the audience on the rigorous checking that government make on samples that an exploration firm takes outside the country for analysis.

He explained that samples have to go through vetting by three government institutions which include Geological Survey and Mines Department as well as Malawi Revenue Authority (MRA).

Director of Geological Survey Department Jalf Salima commented that firms take samples outside the country for analysis as part of their exploration work because Malawi does not have a certified laboratory where analysis for mineral samples can be done.

As you might be aware, mining in Malawi is at an infancy stage hence we lack capacity to do the analysis right here, as a result investors have to do the sampling outside the country,

Furthermore, the Geological Survey Department director explained that the investors’ purpose of doing the analysis is to determine whether their investment can be recovered.

When it comes to the samples that are taken for analysis outside this country, their value is not monetary, the value only remains in the data obtained as it helps in designing the pending mining process and determining the viability of the investment,

Also joining the discussion was Former Minister of Natural Resources, Energy and Environment, Honourable Grain Malunga, who is an expert in mining and environmental management. He explained that mineral sampling can even take seven to ten years before actual mining is commenced and the members of public need not to be suspicious of any underhand dealing on the part of investors.

This is because it is through such a process where the potential of that particular mineral is determined to guarantee the profitability of the investment,

The two traditional leaders present, Inkosi Mabulabo and GVH Namalima also aired their concerns, among which, was lack of proper information from government as regards the mining activities that are taking place in their respective jurisdiction.

The other issue raised at the meeting was the alleged tendency by some mining investors of disregarding proper procedures when entering into areas to commence mineral exploration.

We are really baffled with the breach of our traditional procedures of acquiring land. We need to be consulted prior to the commencement of any work by these investors so that we should inform our subjects about the issue to avoid the misconception and the air of suspicious that comes when people in the area, let alone us, us leaders, are not made aware of the impending mining process,

said the emotionally charged Mabulabo, with Namalima, who sat next to him nodding in total agreement.

Noting the chief’s concerns, Executive Director for LandNet, Mr. Mlaka, an expert in land issues acknowledged the existence of the problem, but was quick to blame it on the delay to the tabling and passing of the amended land bill, which he said could helped address all these issues, since it clearly stipulates appropriate procedures if an investor wants to use traditional land.

The event attracted a multitude of questions which could be an indication that more and more people are getting interested in mining issues in this traditionally agricultural country.

This could auger well with the objective of the of the event, which was to discuss the governance elements and practices that needs to be strengthened, revised or adopted into the current governance system in order to enhance responsiveness, inclusiveness, transparency, accountability and respect for human rights in the mining sector. 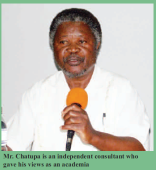 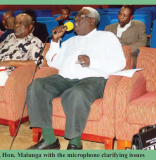 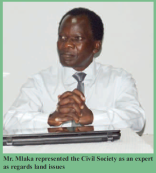 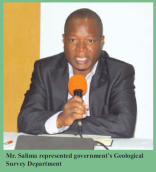