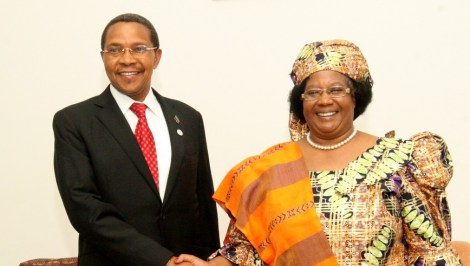 The Presidents of Tanzania (Jakaya Kikwete) and Malawi (Joyce Banda)

Last month, Malawi’s Minister of Foreign Affairs and International Cooperation Ephraim Chiume expressed concern that the mediation of the dispute between Malawi and Tanzania over Lake Malawi has been compromised. This week, Joyce Banda, Malawi’s president, confirmed these concerns (see video below).

The Africa Forum of former African Heads of State and Government, chaired by former Mozambiquan president Joaquim Chissano, is currently discussing the stand-off between Malawi and Tanzania over Lake Malawi’s (or Lake Nyasa’s) boundaries. However, last month, The Sunday Times reported that the Malawian government is unhappy that a Tanzanian national, John Tesha, is the Executive Secretary of the Forum, stating that he may compromise the resolution process.

Banda explained that information Malawi submitted to the Forum was leaked to the Tanzania government,

We should not waste time on this [mediation]. After surrendering our documents, we were told that they were leaked to Tanzania before the Tanzanians surrendered theirs. I sent the minister again to tell retired Mozambican president Chissano that we have a problem with that. We feel everything is compromised. Our view is that we should eventually go to court. We should not waste time on this. That’s where we are.

Our earlier position was to go to the International Court of Justice over this matter but we did not want to be seen to be underrating the Forum of Former SADC  leaders as our friends [Tanzania] had proposed to engage them. We are still waiting for them to make a determination. But if I have to tell Malawians the truth, it is a waste of time. It is better to go to the International Court of Justice as we will be happy to respect the ruling of the court.

It’s true that they have opted to pull out of mediation. Malawi informed (former Mozambican) President [Joaquim] Chissano of its decision […] they have yet to get in touch with us. We got the news from Mr Chissano.

Malawi should know that Tanzania has not yet ratified the ICJ protocol […] the best thing is for them to come back to the negotiating table to see what we can do next after the failed mediation.

The dispute has been linked to the oil reserves that lie below the lake. Malawi’s government has already awarded two companies, Surestream Petroleum and SacOil, exclusive prospecting licences to explore for oil.

We are not worried. We sent experts to the UK and Germany to investigate into the legitimacy of the boundary. The evidence is incontestable. We are waiting for the team to wind up business and advise on the matter.