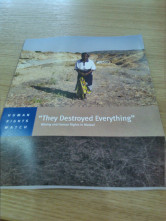 Today, ahead of the International Right to Know Day, Human Rights Watch (HRW) launched “They Destroyed Everything”: Mining and Human Rights in Malawi” in Lilongwe, Malawi, today with 60 stakeholders. The report “documents the failure of the Malawian government to adequately protect communities from potential harmful impacts of mining” in Karonga District in relation to the operations of Paladin Africa Limited, Eland Coal Mining Company and Malcoal.

Dewa Mavhinga (Senior African Researcher, HRW) kicked off the launch by thanking everyone who supported the research, explaining that 150 people were interviewed for the report including 78 residents from Kayelekera and Mwabulambo and more than half of these were women. The following video was then screened:

Katharina Rall, the lead HRW researcher in the report, ran through the main findings. A key recommendation was on improving access to information

We found that they [residents in mining communities] did not have the information they needed to assess risks, protect themselves and just to understand what is happening in their communities. […] We have ourselves have struggled with access for information too. For example, for water testing, and we haven’t received the results and, of course, that is more difficult for community members or villagers to access information[ …]on issues such as the safety of the water in their community.

We’ve documented in our research that the monitoring that was going on wasn’t sufficient and the results were not released to the communities. […] They worry about the pollution of their water […] but they haven’t been able to access information about the water testing results so people do not know if the water sources are safe and which ones to use.

Rall highlighted that the study also focussed on the particular impacts of mining on women,

this is because women are the primary caregivers in the family and largely responsible for growing crops and collecting water for their family. They are the ones who worry the most about these impacts […] and they need the information to know whether to use this borehole or the other one. […] Women and girls walk longer distances, they have to spend more hours working in the field to sustain their families. […] This keeps girls from going schools and keeps them from other important tasks they have or simply to rest.

Among other recommendations, HRW urges the Government to enforce the existing environmental standards and to carry out more comprehensive inspections, as well as strengthen and make information accessible to the public, especially residents in mining communities. Rall noted the Government’s ongoing legislative reform and stated that the Mines and Minerals Bill could be improved through strengthening access to information which is “rather restrictive” in the latest version HRW has seen.

Reinford Mwangonde (Executive Director of Citizens for Justice, the Secretariat for the Natural Resources Justice Network (NRJN)) and Elyvin Nkhonjera Chawinga (Oxfam Malawi Extractives Officer and representing the Chair of NRJN) spoke on behalf of civil society at the launch.

As NGOs in Malawi, we have raised these issues in the last 10 years and our government has never listened; we don’t have to wait for Human Rights Watch to come all the way from New York to tell us that something is wrong. The government is still going on the same path, doing the same things as it did in Kayelekera and Mwabulambo, engaging oil and gas companies to go on the Lake and doing the same things as they have done in the past.

Nkhonjera Chawinga asked the government to abide by the principles of United Nations “Protect, Respect and Remedy” Business and Human Rights Guiding Principles, to implement Free, Prior and Informed Consent principles and go further in enhancing access to information.

We need to see how we can protect the rights of women in the community. If water is polluted, a woman now has a task to look for areas whereby they are going to find water. They are going have to work long distances, while maybe a man will have to wait longer for breakfast, a woman has to walk longer which affects their health. If children access polluted water this is a further burden to the women who has to take the husband and children to hospital.

Executive Secretary of the Malawi Human Rights Commission, Grace Malera, explained that the Commission has been working on rights issues and the extractive industries in Malawi since 2011 when the Commission looked into Terrastone Ltd’s Njuli Quarry in Chiradzulu District.

The Commission has made recommendations over the years on the weak legal framework, environmental protection, displacement and compensation of people, provision of health and safety measures, revenue transparency and corporate social responsibility.

Malera concluded her remarks with a call to work together for Malawi’s future,

Malawi is at a point in history where a number of oil and mineral discoveries have been made. This is good for the economic development for the country. These resources can be a path to prosperity but they can cause significant risks associated with the resource curse. Instead of becoming a blessing, these resources can turn out to be a curse if human rights principles are not adopted in doing business. We are calling on all stakeholder for a collaborative approaches.

The Department of Mines was represented by Burnett Msika. He did not comment on the substantial issues in the report but said that Government will respond.

Management from the Department of Mins sent me here not necessarily to point out the merits and demerits of the report that has been produced by Human Rights Watch. Neither am I here to react to issues that have been raised in the report. On the, contrary, I am here to receive this report that has been produced by Human Rights Watch and to relay it to management and I have been assured by management that after they have gone through the report, after an appropriate time, they will provide the forum to completely respond to the issues in the report. So on behalf of management we have received the report and we are thanking you for your effort for producing your report.

During the question and answers, several participants expressed dissatisfaction with the Department of Mines’ position given that the Department has also been pursuing Eland Coal Mining Company since it did not notify the Government of suspension of operations at the mine and there have been concerns raised over the lack of rehabilitation as also documented by the Malawi Human Rights Commission and HRW. Eland Coal Mining Company is a subsidiary of the Isle of Man based Heay Mineral Limited, which is owned by Independent Oil & Resources PLC in which the Norwegian Berge Gerdt Larsen and family members have a 70% stake, according to the HRW report.

The Karonga Chitipa Heritage Foundation and civil society representatives also raised concerns with oil and gas exploration, asking Government to make sure it has learnt from the past mistakes. Access to information was also identified as an issue for petroleum exploration, with no public disclosure of the results of the Government’s review of the oil and gas licences and contracts that was conducted between 2014 and 2016.

All speakers and many of the participants in the launch noted that Malawi has the chance to ensure mining benefits the country, as Rall concluded

Malawi’s extractive industries are still in their infancy and it’s just the start. […] But it’s really developing now – it’s an opportunity for the government and the companies to get it right and to make sure that communities living in these areas benefit and their rights are respected.

The full report is available online:

2 responses to ““They Destroyed Everything”: Human Rights Watch releases report on mining and human rights in Malawi”