The piece “Buoyant gold mining prospects for Malawi: Mota-Engil advances in exploration work” featured below was initially published in Malawi’s Mining Review Issue Number 24 2015 that is circulating this April 2015. 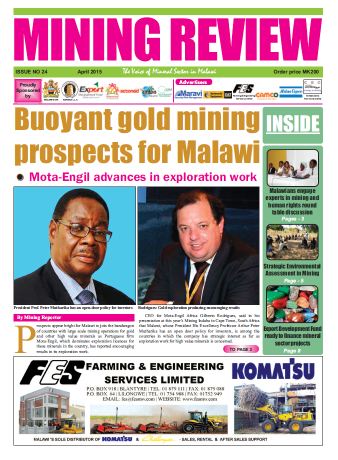 Prospects appear bright for Malawi to join the bandwagon of countries with large scale mining operations for gold and other high value minerals as Portuguese firm Mota-Engil, which dominates exploration licences for these minerals in the country, has reported encouraging results in its exploration work.

CEO for Mota-Engil Africa Gilberto Rodrigues, said in his presentation at this year’s Mining Indaba in Cape Town, South Africa that Malawi, whose President His Excellency Professor Arthur Peter Mutharika has an open door policy for investors, is among the countries in which the company has strategic interest as far as exploration work for high value minerals is concerned. 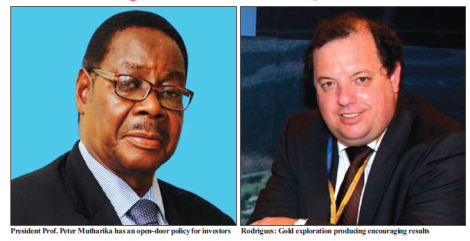 He informed the audience that Mota-Engil Minerals & Mining’s exploration division currently controls three exclusive prospecting licences (EPLs) in Malawi with a combined total area of 7681km2 and with potential for gold, base metals and graphite, among others.

Mota-Engil Minerals & Mining puts value on new resources and is investing in exploration projects, mining contracts and building partnerships with other mining companies in Malawi,

Tundulu has the potential for a phosphate and rare earth element (REE) resource grading 20% p2o5 and 2.5% TREO respectively and results for a 6000m drilling programme completed in 2014 are pending.

The Lake Chilwa Heavy Mineral Sands Project has the potential for a 300mt resource at 3.5% ilmenite and a scoping study is currently underway.

The Chilwa Project is further favoured by the upgrading of the Nacala Corridor railway which will offer low-cost transport to the port of Nacala and for which Malawi has been allocated 5mt per annum,

He also gave brief details of seven Malawian exploration projects that the Portuguese multinational is working on which are Dwangwa, Kasungu, Malingunde, Lisungwe, Lake Chilwa, Tundulu and Mwanza Fault target.

Mota-Engil and its joint venture partner are targeting historical gold occurrences in Dwangwa, and the JV is working to establish the quality and quantity of the resource.

In Kasungu, Rodrigues reported that the company has identified three target areas where it has completed a 1540m drilling exercise unearthing gold with a peak value of 1.6g/tonne.

In Malingunde in the District of Lilongwe, Mota-Engil is working on a 5km x 30km target zone and a geophysical survey is underway at the site.

The firm already completed a ground electromagnetic survey and 2200m drilling while a 4000m drilling programme is planned for May 2015.

In Lisungwe, Rodrigues said Mota-Engil is targeting gold, copper, nickel, graphite, among other    minerals, in its exploration work in its licence areas which include Likudzi (Ni), Phalula (Au and Cu) and Mateme (Gr).

The firm has conducted geophysical surveys at the site including a magnetic survey and a 3595m drilling programme.

Mota-Engil is also the mining contractor for Australia’s Paladin Energy’s Kayelekera Uranium Mine, which is Malawi’s largest investment in the mining sector.

Besides, the group is currently contracted to manage four Lake Malawi ports for a period of 35 years and was also contracted by Brazilian mining giant, Vale, to construct the railway line that cuts through Malawi from Vale’s Moatize Coalfield to Nacala Port in Mozambique.

President Mutharika’s administration is promoting the exploration and exploitation of minerals in Malawi to ensure economic diversification for the country which heavily relies on agriculture with tobacco as the engine for growth.

At the Cape Town Mining Indaba, the Malawi Government delegation was led by Commissioner for Mines, Mr. Charles Kaphwiyo, who presented details of Malawi’s mineral potential to visitors at the Malawi stand.

Canada-listed Mkango Resources, which is conducting a definitive feasibility study for rare earth mining at its Songwe Hill licence area in Phalombe also made a presentation at this year’s indaba in which it highlighted the progress that the project is making. 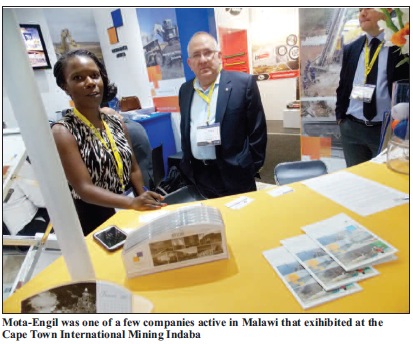