The Nation revealed today that Malawi’s Attorney General Kalekeni Kaphale produced a legal opinion on the 6 oil exploration blocks the government has awarded and the subsequent production sharing agreements the government signed on 12 May 2014.

Kaphale raised concerns that production sharing agreements were signed before production licences were awarded and oil and gas discoveries were made. He has also called for further investigation into the corporate relationship of three companies (Hamra Oil, RAK Gas and Pacific Oil) that control five out of six blocks, even though related parties by law (Petroleum (Exploration and Production) Act 1983) can only control a maximum of two contiguous blocks.

The government through the Ministry of Natural Resources, Energy and Mining is currently reviewing these licences to

ensure that the Licences that were granted or the Agreements that were signed are for the benefit for the people of Malawi and were in accordance with all the relevant laws of the country.

The blocks have been awarded as follows

Three of these blocks have been awarded on Lake Malawi which gave rise to an UNESCO monitoring trip last year and there are ongoing boundary disputes with Tanzania.

The article in The Nation has been reproduced below.

Attorney General (AG) Kalekeni Kaphale says the country’s laws were breached in the award of the now suspended oil and gas exploration licences in Lake Malawi and other parts of the country.

In his legal opinion to the Ministry of Natural Resources, Energy and Mining that The Nation has seen, Kaphale claims that there is information that points to the fact that the three companies controlling five of the six oil and gas exploration blocks are linked to the same people. 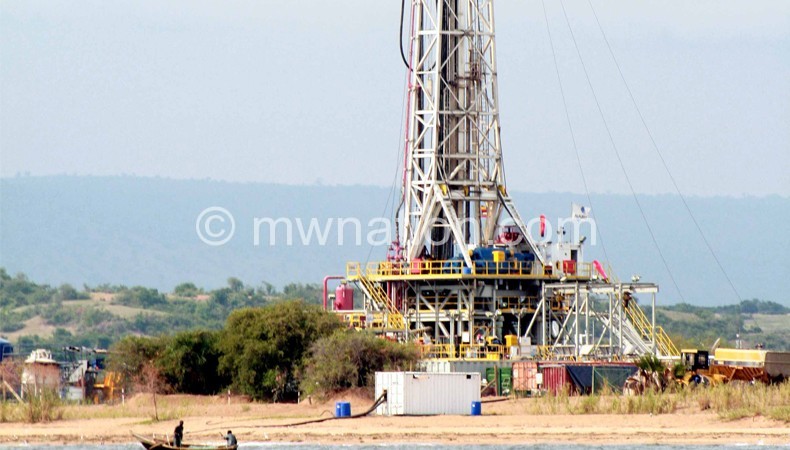 Part of the equipment oil companies use

The opinion further faults the then Ministry of Mining on how they issued licences to three companies when they knew that the same person was signing documents on behalf of all the three companies.

Kaphale said that common signature alone should have prompted the then Minister of Mining to investigate before issuing licences to Rak Gas and Pacific Oil and allowing Hamra to buy the 51 percent interest in the blocks that were licensed to Surestream Petroleum of the United Kingdom.

Rak Gas is owned by the Government of Ras Al Khaimah, one of the emirates of the United Arab Emirates (UAE) while Hamra describes itself as a Cayman Island origin private company.

Pacific Oil says it is part of Vega Petroleum Limited—the privately owned oil and gas entity that has oil producing and exploration concessions in Egypt.

Kaphale also notes that the ministry proceeded to sign production sharing agreements (PSAs) with the companies against advice from the Solicitor General to only agree to PSAs after the oil or gas is discovered.

On December 22 2014, government asked Kaphale to provide legal advice on various issues relating to the licences, including issuance of exploration licences and whether Hamra Oil lawfully acquired the equity stake in the Surestream prospect.

My advice is as follows: [a]. We must cancel all the exploration licences or at a bare minimum, licences for blocks Four, Five and Six as having been entered into with parties that are related to Hamra Oil Limited, which has controlling interest in two blocks already as these are the maximum a party can get.

He said under Petroleum Regulations, the country is divided into six blocks for the exploration and production of oil.

In 2011, Blocks Two and Three were issued to Surestream Limited, which later farmed to Hamra Oil in a joint operating agreement and farming out agreement. Hamra now owns 51 percent equity in the blocks, according to the opinion.

As an alternative, the AG has suggested that government invites Hamra, Rak Gas and Pacific to choose “which two contiguous blocks they want to continue exploring and make them relinquish their interest in the rest.”

He said government was currently undertaking a due process on the matter following the AG’s opinion and will release its position within a week.

Natural Resources, Energy and Mining Minister Atupele Muluzi, who alongside Cabinet colleagues at Foreign Affairs and International Cooperation, Justice and Constitutional Affairs, Finance, Development and Economic Planning, also sit on the special Cabinet committee reviewing the process, refused to comment on the contents of the report.

The questions around the licences prompted the Ministry of Natural Resources, Energy and Mining to suspend oil and gas exploration activities in November 2014 pending a review, which was estimated to take a month.

It is now nearly five months since.