The Wildlife and Environmental Society of Malawi is holding a public talk tomorrow (Thursday 3 December) at Four Season’s Nursery in Lilongwe at 18.00: “Lake Malawi Under Threat: Is Oil Drilling in Lake Malawi Sustainable?”.

Godfrey Mfiti will be giving the talk. He recently wrote this piece on oil in Malawi and has been advocating for Malawi to honour the World Heritage Convention through which Malawi’s Lake Malawi National Park is recognised as a World Heritage Site. Mining in Malawi covered UNESCO’s examination of the Park and oil exploration here in August 2014. UNESCO recommended the Government of Malawi to prohibit exploration in the Park and around the buffer zone as well as to expand the area that is part of the Park. 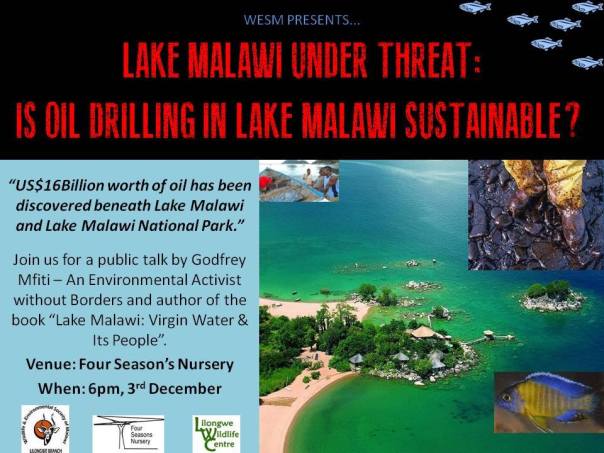 Editor’s Note: Not clear of source for the figure USD 16 billion “worth of oil has been discovered beneath Lake Malawi” since exploration to date has included full-tensor gravity surveying which is only a preliminary examination of potential resources – hopefully more information will be disclosed tomorrow.