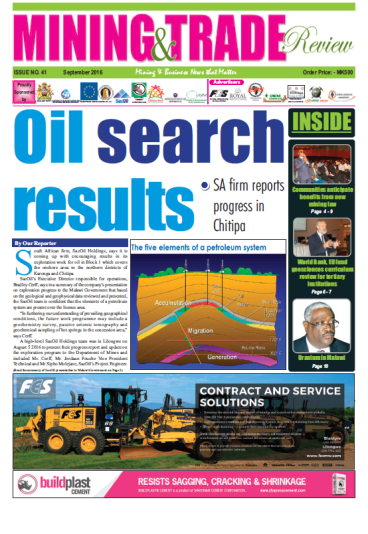 South African firm, SacOil Holdings, says it is coming up with encouraging results in its exploration work for oil in Block 1 which covers the onshore area in the northern districts of Karonga and Chitipa.

SacOil’s Executive Director responsible for operations, Bradley Cerff, says in a summary of the company’s presentation on exploration progress to the Malawi Government that based on the geological and geophysical data reviewed and presented, the SacOil team is confident that the elements of a petroleum system are present over the licence area.

In furthering our understanding of prevailing geographical conditions, the future work programme may include a geochemistry survey, passive seismic tomography and geochemical sampling of hot springs in the concession area,

A high-level SacOil Holdings team was in Lilongwe on August 5 2016 to present their progress report and update on the exploration program to the Department of Mines and included Mr. Cerff, Mr. Jordaan Fouche Vice President Technical and Mr Sipho Molejane, SacOil’s Project Engineer. 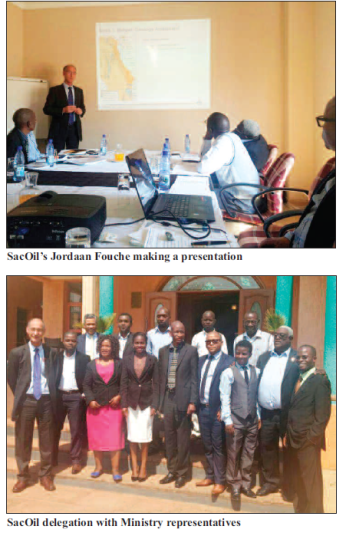 SacOil Holdings was awarded Block 1 in December 2012. At 12,265 square kilometres, Block 1 is the second largest petroleum exploration license demarcated in Malawi. Located in the north western part of Malawi, bordering Tanzania to the north and Zambia to the west, the Block is geologically on trend with the East African Rift (EAR).

The EAR is a proven hydrocarbon province with prolific oil discoveries in Sudan, Chad, Kenya and Uganda. SacOil Holdings Limited, the South African Company, which holds 100% equity in Block 1, is dual listed on the Johannesburg Stock Exchange and London’s AIM.

“Exclusion criteria”, which typically include protected areas and areas with a high probability of impacting negatively on communities, were applied first, which eliminates certain areas from further exploration. “Repulsion or avoidance criteria” are then applied to the remaining areas which may highlight sub-optimal areas in terms of biophysical, social or technical characteristics. Lastly, SacOil applied “Attraction criteria” which include technically or strategically advantageous areas such as areas in close proximity to existing infrastructure (roads, rail, etc) and cleared or already degraded land.

In November 2014, the Department of Mines served notice to all licence holders to cease oil and gas prospecting operations pending a review of the terms of all licences issued. SacOil was given the go-ahead to continue operations in July 2015. Despite the seven-month halt in their work programme, the SacOil delegation presented a positive report to the Ministry.

Based on the geological and geophysical data reviewed and presented, the SacOil team is confident that the elements of a petroleum system are present over the licence. The future work programme will revolve around proving the existence of each element, which includes Reservoir, Trap, Seal, Source and Migration path ways.

It should also be noted that the appropriate relative timing of the geological formation of these elements as well as the processes associated with the generation, migration and accumulation of hydrocarbons are necessary for oil and/or gas to present and be preserved.

Taking into account the above elements, petroleum exploration plays and prospects will be developed in geological basins and regions in which a complete petroleum system has some likelihood of existing.

It is with the above work completed to date that SacOil will now look forward to developing exploration prospects and define targets for testing.

SacOil Executive Director Operations, Bradley Cerff says that in furthering their understanding of prevailing geographical conditions, the future work programme may include a geochemistry survey, passive seismic tomography and geochemical sampling of hot springs in the concession area.