…Transparency is the catch word – Centre for Environmental Policy and Advocacy

Impoverished communities in rural areas where mining activities are taking place say they are hoping that government will include clauses in the new Mines and Minerals Law that will ensure that they get substantial benefits from mining projects.

The members of the community, who are always sidelined on decision making regarding mining projects investors are implementing in their areas, voiced their expectations on the new law in the wake of government’s delays to table the Mines and Minerals Bill in parliament despite the Ministry of Natural Resources, Energy and Mining finalizing consultations with stakeholders on the proposed law.

It is unfortunate that though investors come to develop their mining projects on our land, the government which gives the licences to the investors does not consult us. We just see investors digging holes in our land and when we ask them they say it is the government which has given them the land. We, therefore, urge the government to live up to its word and ensure that the new law that will facilitate that issues of community engagement are adequately  addressed is enacted as soon as possible,

says a woman, Silino Likovo, from the Songwe Hill area in Phalombe, where an investor Mkango Resources is carrying out a rare earth exploration project.

Commenting on the issue, the area’s Village Head Namalamba says it is possible that with a good law in place, communities will be in a position to get more benefits from mining projects because despite legal shortfalls on areas such as community engagement and corporate social responsibility, companies such as Mkango are showing that they are committed to the course following civil society interventions through the Tilitonse project.

In my area, there was indeed community hostility towards the investment due to communication shortfalls before Tilitonse came in through the civil society to empower us with knowledge and negotiating skills to engage the investor on corporate social responsibility issues. Now after constructive dialogue with them, Mkango Resources has demonstrated the desire to partner us, the people in development. Now they have rehabilitated roads, bridges and boreholes, and also painted school blocks. We believe that with a good law in place to guide such companies, the benefits could be more, 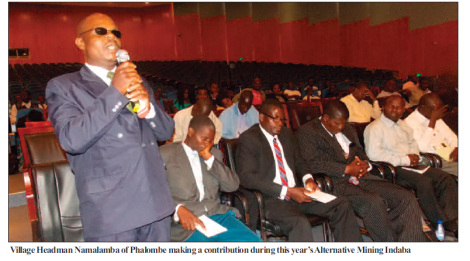 Communities around Mwaulambo Coal Mine in Karonga, where a local investor Eland Coal Mine has a coal mining licence, are also desperately in need of the new mines law. For them, the issue is not that the law will help them acquire more benefits from the project as regards corporate social responsibility rather they want protection from the wrath of bad mining practices.

The issue at hand is that Eland, which started prospecting in 2007 and later mining in 2008 without any community consultations, has abandoned the site leaving big unfilled gullies at the site which is not guarded by a durable protective fence.

The members of the community say they are bitter with the government and the miner for failing to implement a mine closure plan, which would have involved filling the gullies.

There are fears that while playing, children may fall into the gullies and get injured or even die. In addition, our livestock are also endangered as we already have cases of them dying after falling into the gullies,

says a woman from the area.

The members of the community, therefore, ask the government to ensure that the new law has provisions for investors undertaking mining activities to invest in environmental bonds whose proceeds will be used to implement a mine closure plan to include rehabilitation of the environment in order avoid cases similar to the Mwaulambo Coal Mine issue.

The Mwaulambo community has, meanwhile, commenced litigation measures against the government and Eland Coal Mines for damaging the environment in the area, and civil society groups under the umbrella of the Natural     Resources Justice Network (NRJN) are planning to join the community in seeking justice over the issue.

Transparency is the catch word

Adding its voice, a local civil society organization Centre for Environmental Policy and Advocacy (CEPA) says there is a need for the new law to promote transparency and accountability in the minerals sector in addition to ensuring that companies fulfil their corporate social responsibility pledges.

She explains that the enacting of the new mines law must be supported by the enactment of the Access to Information Law and effective implementation of the Extractive Industry Transparency Initiative (EITI) process to facilitate that transparency starts from the award of mineral rights to sale of the end product.

Improved transparency of revenue streams will shine a light on what resources are available for investing in development, how they are spent, and the results that are achieved, to help ensure resources are invested effectively for development – in better health services, more productive agriculture, higher quality education, and improved  infrastructure,

says Simkonda whose organization is implementing a mining governance project to, among other things, promote transparency and accountability in the minerals sector with funding from Tilitonse Fund.

Simkonda says by making public the payments that corporations make to governments, citizens can better track the resources that are due to them for the export of their oil, gas and mineral wealth.

Minister of Natural Resources, Energy and Mining Bright Msaka, however, says his Ministry is committed to see that the Mines and Minerals Bill is brought to parliament before the end of the current session. He explains that the Bill is now with the Attorney General undergoing a final screening process before it is presented to the House.

Mining Engineer at the Department of Mines Cassius Chiwambo says he expects the new law to bring sanity in the mining sector explaining that the draft Bill and the Mines and Minerals Policy adopted in 2013 are in tandem with modern day practices in the extractive industry.

The 2013 Policy as analysed by many, is found to be adequate to meet government desires and the Draft Bill covers almost all critical issues affecting the modern day extractive industry worldwide,

says Chiwambo, who is also an expert in mines and minerals law and policy.

He points out that both the law and the policy are in line with the Africa Mining Vision 2050.

What remains now is the Production of the Bill’s Regulations which is in process at intra-ministerial level to produce a Zero Draft,

says Chiwambo who also recommends strengthening of enforcement mechanisms as being critical to ensure that the law works for the people.

Chilenga says the committee engaged two professional consultants to advise it on how best to draft the law that is representative of the needs of Malawians and through the professional advice they came up with recommendations that were submitted to government.

We hope the Bill will come to parliament with our proposals incorporated,