Stakeholders in Malawi’s mining sector last month converged in Mangochi where they banged heads with representatives of tertiary   institutions on how they can come up with a revised geosciences curriculum that will enable the colleges produce graduates capable of meeting the needs of the country’s blossoming mining sector.

The National Consultative Stakeholder’s Curriculum Review conference took place at Nkopola Lodge from August 8th to 9th, 2016 and was organized by Department of Geography and Earth Sciences (GES) of Chancellor College with financial support from the US$30million World Bank and European Union co-funded Mining Governance and Growth Support Project (MGGSP).

The function drew together several interest groups which included industry players, members of the civil society, officials from the Geological Survey Department (GSD) and academic experts, both local and international.

Opening the conference, Vice Principal for Chancellor College, Professor Samson Sajidu, said the review of Geography and Earth Sciences programmes was an important undertaking as it would assist in shaping the future of the mining sector.

Curriculum development is key to the implementation and support of the MGGSP because curricula should be dynamic and reflect the growing needs of the country,

He told the gathering that the current curriculum, which may not be at par with local and international developments affecting the sector, has been in place since 2006 which is quite contrary to the University requirement of programmes review after a complete cycle, thus fifth year after a 4 year programme.

Sajidu, therefore, said the MGGSP support for geosciences curriculum review will necessitate adjustments to the programme to suit the changes and developments in the mining sector.

We believe that this gathering, which has brought together key national and local stakeholders in the geology and mining sector, will critically review the present curriculum and make recommendations that will be integrated in the development of a draft curriculum. In turn, programme modules relevant to the current needs of our sector will be produced,

For long, Malawi has been reliant on agriculture as the backbone of the economy but the government is now pursing plans to diversify and identified mining among the key sectors that can spur the country’s economic growth.

This is why the Malawi government came up with MGGSP with the aim of generating baseline and vital geo-scientific data while ensuring that key stakeholder institutions in the mining sector are also empowered with capacity to carry out their core mandates and this is where the role of the tertiary education sector comes in, 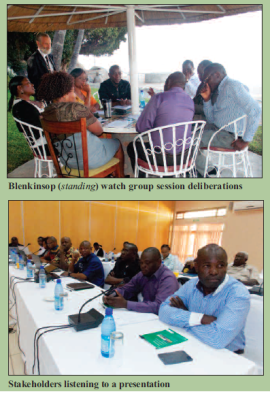 He said Universities develop the human resources through training, innovations and research which can support growth and decision making in the mining sector; hence it was imperative for institutions to develop  responsive programmes to practically and theoretically equip geosciences graduates with knowledge that will allow them make meaningful contributions to the industry and economy as well.

Sajidu noted that after the project, the Universities will remain the vital repositories of geo-scientific knowledge and data, which will support policy formulation for the sector.

The Faculty comprises seven departments namely: Biological Sciences, Chemistry, Computer Sciences, Human Ecology, Physics, Mathematical Sciences and the GES, but according to Rusuwa, the latter has a special place owing to its bridging role between the natural and social sciences, through three categories of courses it offers, which are geological sciences (Earth Sciences), physical geography and human geography.

This bridging role is very important and has had applicability with considerable success in many critical sectors such as mining, rural and urban development, disaster risk management among others, where the natural sciences are applied to address social issues,

He further explained that geosciences play a crucial role in the development of the country in a number of ways such as mining, geo-hazards, water resources, climate, infrastructural development, land use planning, etc, and the GES Chanco department deals with all these areas which are in line with the current needs and challenges of the country.

Not surprisingly, therefore, the Department’s curriculum ought to always be in tandem with national and global trends,

said the Deputy Dean of Science, who appreciated the World Bank/EU financial support for what he termed an ‘all-important task’.

Rusuwa pledged unwavering commitment to ensuring that the curriculum being offered at all its programme levels is relevant to both the national development goals as well as being on equal footing with international academic standards.

He also lauded other forms of support the Project has offered to the GES department and pledged collaboration with other institutions offering relevant components of earth science such as the Polytechnic and the Malawi University for Science and Technology (MUST).

The Project has recruited Professor Tom Blenkinsop of Cardiff University, an internationally acclaimed academic, to assist in the development of the new curriculum.

In his remarks, Blenkinsop emphasized on the need to come up with a programme that will impart considerable local geo-scientific knowledge, that will apply locally as well as internationally.

He strongly recommended the importance of developing programme modules specifically dealing with field work, saying this will help prepare students for the work required on the ground.

We need to enhance field-based teaching in order to improve student’s hands-on experience. Graduates should be able to design and manage mining related field projects such as independent mapping project, identifying minerals and field seals because geologists are revered for their referent of expertise carried in fields,

The academician stressed that at the end of the training, graduates should be able to independently use the acquired skills and knowledge to identify a problem and effectively devise a way to deal with it.

He suggested the option of offering specialized degrees with wide selection of optional modules that are sensitive to contemporary social issues.

Director of Geological Survey Department Jalf Salima agreed with Blenkinsop’s proposals noting that that country is in dire need for experts in geo-sciences and the curriculum should be designed to produce technical experts to manage issues such as project design, field exploration work and archiving of data.

He said through the revised programme, institutions should be able to mould experts who will undertake collaborative geo-scientific research, evaluate mineral resources and generate baseline information to investors for detailed exploration.

The curriculum we are deliberating on today should enable students acquire knowledge and skills on how to collect, update, curate and disseminate geo scientific data; they should be able to map, document, carry out assessments of geo hazards and disseminate results to policy makers, and they should as well be capable of providing technical advice to small-scale and artisanal miners,

Chamber of Mines and Energy President Dean Lungu and coordinator Grain Malunga, concurrently acknowledged of existing deficit in as far as well-trained field experts in geo-sciences are concerned and urged institutions to come up with programmes that have relevance to local mining industry job opportunities.

MGGSP coordinator Hastings Chipongwe explained that the curriculum review is among the initiatives MGGSP has lined up in order to achieve its objective, which is to improve efficiency, transparency and sustainability of mining sector management in Malawi.

The project’s initiatives include creating conducive legal and regulatory framework, reviewing and optimizing the mining fiscal regime, updating geological information and making it easily accessible, as well as developing human capacity for the mining sector.

So we are here today because MGGSP is addressing the aspect of the project that concerns development of human capacity for the sector,

Chipongwe explained that through UNIMA, the project intends to build mass skills in mining-related disciplines and hoped the Universities will institute geology as a major course.

Apart from Chanco, the MGGSP has also supported curriculum development at Polytechnic, leading to the introduction of three mining-related programmes namely; Metallurgy and Mineral Processing, Mining Engineering and Geological Engineering.

Government believes that the growth of the mineral sector on a sustainable basis is possible if the environment is conducive to investment in exploration and production. Right frameworks and capacities need to be in place for the sector to realize its potential, both in terms of macro-economic    contribution and non-monetary linkages,

Through the MGGSP, GES has already undertaken a number of activities such as visits to other institutions of higher learning offering similar programs in the region and overseas, refurbishment of the teaching rooms, offices of GES and acquisition of furniture, computers as well as lab equipment.

The new curriculum development is a fourth activity in line of implementation, while needs assessment and development of exploration and mining aids for small scale mining sector entrepreneurs will follow within the course of the remaining project life.

As part of the same capacity building exercise, MGGSP is also facilitating training of existing staff in the relevant institutions in order to properly manage and regulate the sector.

So far, 12 officers are back from long term training and eight are still continuing with the programme under the sponsorship of MGGSP, which also has plans to send more for the programme.

MGGSP was approved on March 31, 2011, declared effective on August 23, 2012 and officially launched by the former State President of the Republic of Malawi Joyce Banda on January 22, 2013.

The project was supposed to be a five-year undertaking, but the period has been extended by 18 months to allow the implementation of other equally important elements.

Meanwhile, as we went to press, Professor Blenkinsop communicated that a draft revised curriculum of a named specialised degree (B.Sc. Geology), which emphasizes mining geology in four modules over three years, rendering the degree internationally competitive, was now in place.

He said the field geological skills which many stakeholders stressed on, geoethics and communication skills, are all embedded in three field modules over three years, amounting to over 5 weeks of field training.

However, Blenkinsop said there were several more steps to be taken to implement the curriculum, including its journey through Faculty, College and University levels, which will occur in the near future.