We are talking to the Ministry of Mines about the EITI process, and we will be interested in supporting Malawi go through that process so that they are in position to sign EITI.

The government is trying to promote the extractive industry and we are in support of anything which can help Malawi’s growth that is policies and legislation. contracts should be fair as to attract investments and benefit Malawians.

It would be a white elephant as it may still not benefit Malawians. Malawian would benefit if we get right on the laws and policies. Once that happens then we can sign the EITI.

For example, Malawi is a signatory to so many conventions and declarations but nothing of that is for the benefit of Malawians. It is because of our legal framework. We need to engage people on what it is that they want out of the minerals, which are theirs. 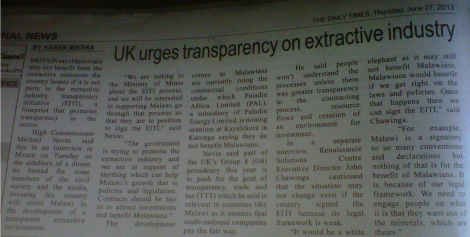 Malawi’s government set up a task force in 2010 to set Malawi on a path to sign up to the Extractive Industries Transparency Initiative (EITI). Becoming EITI compliant is also one of the aspirations set out in Malawi’s National Export Strategy that was launched in December 2012. However, the government has not yet made an official announcement on commitment to the EITI which is one of the first steps required to acquire EITI candidate status, necessary before a country meets the requirements to become compliant.

At the May 2013 EITI meeting in Sydney, George Harawa of the Ministry of Finance (not Minister of Finance as the embedded tweet mistakenly indicates) expressed government’s commitment to the EITI. This needs to be officially announced before Malawi embarks on the EITI journey.

Other stakeholders including civil society organisations and development partners continue to make calls for Malawi to become more transparent in extractives by signing up to the EITI. Yet Malawi’s EITI website run by civil society has not been updated since last year.

Across the world, 23 countries are EITI compliant; these are mainly in sub-Sahara Africa, while there are 16 candidate countries. Two months ago, the EITI adopted recommendations to improve the implementation and impact of the initiative through a new standard. This has increased country ownership and the breadth of disclosure requirements.

2 responses to “One month after UK PM announces commitment to join EITI, British High Commissioner urges Malawi to sign up”