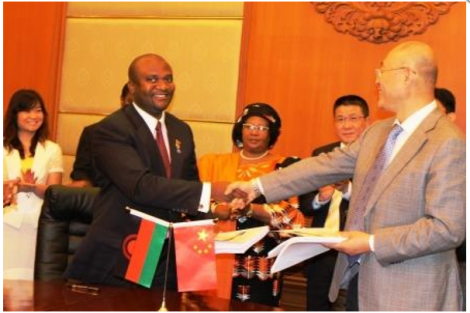 The erratic supply and shortage of electricity in Malawi is one the greatest constraints to doing business in the country, especially for the mining sector. Last week, the President of Malawi Joyce Banda and some of her cabinet travelled from Japan, where they attended the the Fifth Tokyo International Conference on African Development, to China to meet with the Chinese Vice-President Li Yuanchau and investors, and address the China-South Asia Exposition. During this time, the Malawian government signed energy deals with Chinese companies TBEA and China Gezhouba Group Company (CGGC), the latter deal totalling  USD 667.233 million. Malawi first established diplomatic ties with China in 2007.

As she attended the signing ceremony of the agreements, President Banda expressed her sentiments on investment in the energy sector,

I am extremely excited at the prospect of upgrading and construction of new power transmission lines as the project would create jobs for the locals besides, and crucially, alleviating the challenge of power outages, which is critical for industrial development.

TBEA will upgrade and construct additional power transmission lines and the CGGC will design and construct a coal-powered thermal plant at Kammwamba in Neno, southern Malawi; this power plant project is expected to take 24 months.

Minister of Energy for Malawi, Ibrahim Matola, explained that through this CGGC project

Malawi stands to more than double its power output and allow for exportation of power, expansion of rural electrification and extraction of some minerals that have been stranded for lack of power.

A study conducted in 2012 suggested that Malawi loses USD 4,215 million per year due to power outages and thus the Malawian government has earmarked the energy sector as a priority in the country’s economic recovery. There have been a number of developments in the sector over the last few months that you can read about here and here, including the signing of a power interconnection agreement with Mozambique and of a Memorandum of Understanding with Intra Energy for a coal plant in Salima District. Currently, only 8% of Malawians have access to electricity.

Nyasa Times reported in May 2013 that the United Nations Development Programme Sustainable Energy Management programme projected Malawi’s electricity demand to increase from 740 megawatts in 2015 to 1,400 megawatts by 2020. This is far higher than the Government’s forecasts made in 2012 which described the power demand as 408 megawatts in 2010, and projected to increase to 603 megawatts in 2015 and 829 megawatts in 2020. The current capacity of the Electricity Supply Corporation of Malawi (ESCOM) is 286 megawatts, and blackouts are unlikely to end in the near future despite great investment from the World Bank, according to ESCOM’s Director of Planning and Development Lameck Nchembe.

The challenge to meet energy demands is one faced by other countries in the Southern African Development Community, which has developed a Regional Infrastructure Development Master Plan to improve access to electricity and use of energy resources within countries.

During the state visit to China, Banda also secured USD 15 million grant and and USD 10 million interest-free loan which is earmarked for the Mudzi Transformation Trust. This trust was set up by the president last month to create ideal villages with good housing, food and water, and access to roads, as well as a growing socio-economic resilience. Following her stint in Asia, Banda travelled to the United Kingdom where she addressed the G8 Summit on nutrition and Malawi was unveiled as a new country partner under the G8 New Alliance for Food Security and Nutrition.

During her travels, Malawi Voice reported, based on unverifiable sources, that the President opened a bank account with Habib Bank in Dubai to receive kickbacks, which are associated with foreign investors and her son’s “dubious mining deals”, and “fortifying it [finances] against seizure should she fails [sic] to retain presidency in 2014″.

Today Banda is in Geneva, Switzerland, where she will address the International Labour Organisation’s 102nd session. Banda left Malawi in the last week of May 2013 to attend the African Union’s 50th anniversary celebrations in Addis Ababa, Ethiopia.