In 2010, the Government of Malawi set up a taskforce housed under the Ministry of Finance to pave the way for Malawi to sign up to the Extractive Industries Transparency Initiative (EITI). This taskforce has since recommended that Malawi begin the process of becoming EITI compliant. In short, countries that sign up to the EITI commit to ensuring governments publish what they receive from the extractive industries, companies publish what they pay and civil society keeps all parties in check.

The EITI identifies transparency – or a lack of it – as one of the main reasons that resource rich countries are still largely experiencing low-income and are ranked poorly on the human development index; this is commonly known as the resource curse. Yet transparency alone cannot be blamed for the so-called “resource curse” and this has been expounded elsewhere. The EITI is not without other challenges in its formulation and implementation, but that discussion will be saved for another post.

In Malawi, the EITI may provide a platform for policy makers, civil society, the media and private sector to begin discussing how best the extractive industry can be managed, navigated and reformed to ensure Malawi benefits at the national and household levels.

It is laudable that the media houses are beginning to report on this sector, and the press, radio, TV and online media are critical in promoting awareness and creating a demand for improvements in this sector. However, much reporting seems to be centered on tensions and disputes: tensions between government and the mining companies, stand-offs between mining companies and civil society, complaints by civil society made against the government and most notably the dispute between our government and Tanzania’s over Lake Malawi. Is this alone productive for our extractive industry?

Yesterday (Thursday, 29 November 2012), The Nation ran an article on the EITI, “GIZ calls for transparency in mineral wealth” written by Edwin Nyirongo. At Mining in Malawi, we wonder if framing the debate for this sector around the suggestions and agendas, however valuable, of Malawi’s donors (“development partners”) is helpful. For this sector to be profitable for Malawi, we need to take ownership and this starts by driving the debate ourselves.

In other areas, we have seen how fickle in some instances the public through the press has been in regard to our relationship with donors. The last few months we have watched Joyce Banda re-establish relations with donor governments, moves which were first praised and later criticised (see also cartoon below). The underlying sentiment at present may be “who is running the country”? With the EITI and extractive industries, let it be us. 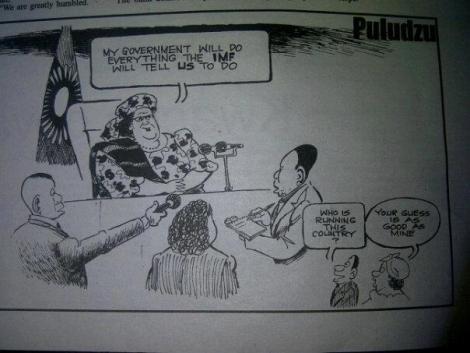 3 responses to “Who is running the country? Who is setting the agenda in Malawi’s Extractive Industries?”