The mining sector in the region and looking at Malawi’s neighbours and Ghana, there seems to be disparity in investment attractiveness due to inadequate geological database, taxation and fiscal regime stability, and ease of doing business. If Malawi is to attract mining investment, there is need to generate and provide quality basic geological information, stable taxation regime, and improving on ease of doing business.

This paper tries to compare mining countries that have a history of mining with Malawi and tries to single out issues that may slow the development of the mineral sector in Malawi.

Malawi’s geology is mainly comprised of the metamorphic basement complex, post basement complex sediments and intrusive rocks. These rocks have been disturbed or reworked by orogenic episodes comprising Ubendian, Irumide and Mozambican cycles.  Genetic modelling has shown that Malawi’s minerals are associated with either the basement complex or the intrusive carbonatites and syenites of the Chilwa Alkaline Province.  The 2014 Airborne Geophysical Survey will bring a better understanding of geology and economic potential of this country.

The Basement Complex, within which are igneous metasomatic and high grade metamorphic rocks, host marble, vermiculite, corundum, graphite, iron sulphides and minor occurrences that can lead to discovery of gemstones, precious metals, chromite, nickel and copper. The post Basement Complex Sediments, mainly Karroo System, host coal and uranium. These rocks are located in the north and south of the country.  The Chilwa Alkaline Province contains also nepheline syenites and pyroxenite bodies. Significant occurrences of rare earths, niobium, strontianite, phosphate rocks and bauxite have been documented.

The Irumide belt in around Manica hosts gold, copper, asbestos, lead, iron ore and nickel. The Karoo rocks of Tete and Moatize host the biggest and most important seams of coal in Mozambique.  Extensive deposits of heavy minerals extend along Mozambique cost in dunes and beaches between Quelimane and south of Angoche.

The country has recently discovered substantial reserves of gas in three off shore gas fields of Pande, Temane and Buzi-Divinhe in Mozambique Basin within Zambezi Delta area.  More gas has been discovered in the north of Mozambique in Ruvuma area.  As of 2012, Mozambique had 104 trillion cubic feet of gas.

Because of its Archean to recent rocks (Mesozoic), Tanzania is rich in minerals with gold and diamonds dominating the mining sector. Other minerals of economic significance include gemstones, tin, phosphate, salt, coal, copper, lead and other industrial minerals.  Recent oil seeps and seismic data shows strong hydrocarbon potential in Tanzania.  Natural gas inventories have so far been put at 2 trillion cubic feet (tcf) in its southern fields, Mnazi Bay area.

The geology of Zambia has characteristics of ancient cratons since it lies between Zimbabwe and Congo cratons. This explains why Zambia has Precambrian rocks that constitute two-third of the country’s rocks.  Zambia is mainly underlain by gneisses, schists, quartzites, conglomerates, crystalline limestone and granites.  Karoo rocks are underlain in rift valleys and western Zambia while the Katanga sedimentary rocks are distributed in northern, north western, southern and central parts of Zambia.

Zambia’s main economic deposits are copper, lead, zinc, silver, gold and cobalt.  Copper and cobalt are mainly found in the Katanga metasediments. The Kabwe lead-zinc mineralisation is found in dolomitic rocks correlated with the Upper Roan Group of the Copper Belt.  Gold is confined to granites, gneisses and felsites of Proterozoic age.  The major gemstones of Zambia are emerald, amethyst, aquamarine, tourmaline, garnet and rose quartz. These are found in pegmatites.

Figure 1 summarises the geology and mineral resources of the countries surrounding Malawi. 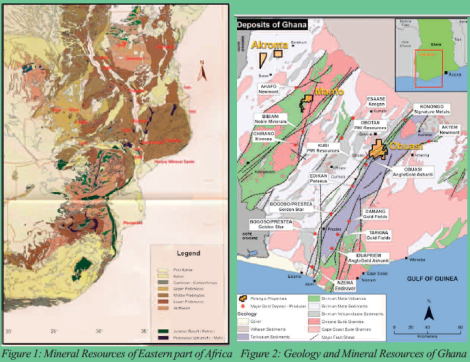 Ghana is mainly underlain by a wide variety of Precambrian igneous and metamorphic rock (Basement Complex) which covers about 54% of the country. The rocks are exposed mainly in the southern and western parts of the country. These rocks are grouped into Birimian and Tarkwaian systems which comprise gneiss, phyllites, schists, migmatites, granite-gneiss and quartzites.  These metasediments are intruded by sills and dykes of igneous rocks ranging from felsite and quartz porphyry to metadolerite, gabbro and norite.  The rest of the country is comprised of Palaezoic sedimentary rocksconsisting mainly of sandstones, shale, mudstone, sandy and pebbly beds and limestones. The main mineralsof interest in Ghana is gold (Figure 2) although recently oil and gas was discovered in the Jubilee unit area where around 110,000 barrels of oil are being pumped. Gold is being mined in the Tarkwaian systems and constitutes over 90% of the total mineral exports.

In terms of high geological prospectivity, Table 1 shows that all the four countries, except Malawi, seem to have high prospectivity with little geological risk because of long history of mining. These countries have reserves and high potential for oil and gas.  Malawi’s recent airborne geophysical survey puts Malawi as an attractive green field for exploration and discovery of minerals such as gold, nickel, copper and platinum.  The Shire Valley along Nchalo basin is a target for oil and gas discovery.

Table 2 shows that taxation regime of the countries under review are competitive.  Perhaps what is competitive is how taxation is administered.  Malawi needs to borrow a leaf from its neighbours.  And being a nation that is trying to establish a viable mining industry, there is need to revise down taxation whilst providing stability and efficient service.

Ranking of Taxation and Risk factors

GMP Securities (2013) ranked countries in terms of attractiveness of mining taxation regimes using the following indicators: royalty regime, Free Carry Interest, Taxation Impacts, Stability of fiscal regime, Ease of doing business, Policy potential and stability.  The results showed that out of a maximum of 40, Finland (37), Sweden (38), Chile (36) and Botswana (36) ranked highest in terms of most attractive fiscal regime while Mongolia was the lowest (14). Table 3 shows that our neighbours scored 24 for Mozambique, 21 for both Tanzania and Zambia.  Malawi was not responsive enough to be get a score while Ghana scored 24.

Table 3: Ranking of Taxation and Risk Factors for the five countries

From the above Table, Malawi lags behind in attracting mining investment due to unstable taxation and fiscal regimes.  Its revenue collection body is becoming unpopular to foreign direct investment because of untimely response to government taxation policy and pressure of reaching revenue collection target. The other countries have medium taxation risk, but are susceptible to unstable fiscal regime.

Table 4 shows that the ease of doing business has almost remained stable for Malawi, Tanzania and Ghana while Mozambique has significantly improved.   In order to rank countries, the World Bank looks at the hurdles investors undergo in starting a business, dealing with construction permits, getting electricity, registering property, getting credit, protecting minority investors, paying taxes,trading across borders, enforcing contracts and resolving insolvency. The same table shows that Zambia has slid over the ranks. This may be due due to unstable decision making in handling its taxation and fiscal regime.esolving insolvency.

In order to attract investment in the mining sector, there is need to qualify recent geophysical data through interpretation of anomalies and remapping of the whole country using available geological information.  The more geological data government generates, the more attractive the mineral sector will be.

The regulatory and legislative framework needs to be revisited, bringing stability clauses and training tax collectors to interpret government taxation policy without prejudice and while understanding the positive role they need to play in collecting taxes with a friendly gesture.  Malawi is in an awkward position because of its thin industrial base and less than a million tax payers who have to cater for a population of fifteen million that do not pay significant taxes and are looking up to government to provide them with potable water, health and education services including farm input subsidies.  A thin revenue base requires a wise national budget that should encourage production rather than consumption.

The ease of doing business can be improved through reforming the civil service to provide efficient services and utility companies to act timely in providing water and electricity.  Registration of companies and issuance of business licences should be done within a week.

In the absence of a conducive legislative and regulatory framework, there is need for government to speed up negotiation of development agreements and publicise them to avoid unnecessary speculations. The government has the choice to come up with a mining Act that is investor friendly or the one that is Civil Society friendly.  The wise choice is to come up with an act that promotes mineral resource development.

One response to “Technical File: A Comparative Study of Malawi’s Mining Sector with Some Mining Countries – Mining & Trade Review (October2015)”