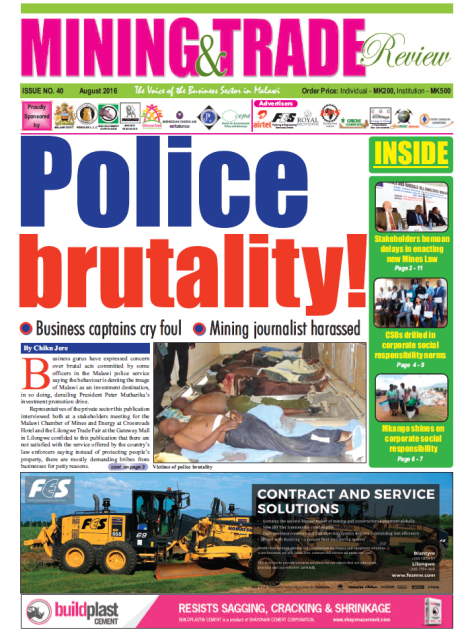 Business gurus have expressed concern over brutal acts committed by some officers in the Malawi police service saying the behaviour is denting the image of Malawi as an investment destination, in so doing, derailing President Peter Mutharika’s investment promotion drive.

Representatives of the private sector this publication interviewed both at a stakeholders meeting for the Malawi Chamber of Mines and Energy at Crossroads Hotel and the Lilongwe Trade Fair at the Gateway Mall in Lilongwe confided to this publication that there are not satisfied with the service offered by the country’s law enforcers saying instead of protecting people’s property, there are mostly demanding bribes from businesses for petty reasons.

Traffic police are the worst corrupt and brutal, as they are now taking advantage of the slow service at the Road Traffic Directorate to obtain documents such as Certificate of Fitness (COF) for vehicles, to demand hefty sums of money from motorists whose vehicles’ COF expired, blackmailing them with arrests

said an official for a mineral exploration company, who declined to be mentioned.

He told Mining and Trade Review that he believed in President Peter Mutharika when he assured investors at the Malawi Investment Forum in Lilongwe last year that he will protect their investments both physically and fiscally but it is surprising that the situation on the ground is contrary.

It is unfortunate that instead of giving us security, some police officers are giving us insecurity by becoming the real thieves while on the fiscal front the economy keeps on tumbling, and portable water and electricity have now become scarce,

Another investor, a director for a manufacturing company, told Mining & Trade Review that Police are disturbing the work at his company because on many occasions they arrest some of his members of staff for no apparent reason.

The President gives me hope when he talks about security but is security arresting an employee who has gone to have his lunch at a free market on these so called rogue and vagabond charges? I think there is need for more sensitisation for our police officers to stop this abuse of power and overzealous response to issues,

The investor also told this publication that he was surprised that a traffic police officer took away his driving licence and he had to part away with a K20,000 to get it back.

I tried to reason with the police officer that I will pay the correct fine for the traffic offence of over speeding to the cashier but he insisted at getting my driver’s licence so that I pay the money directly to him as a bribe,

As a business entity, Mining & Trade Review has also been at the receiving end of this savagery by officers of the Malawi Police Service twice in a period of five months within the city of Lilongwe.

On July 8 this year, Traffic officers at Chitsime Police roadblock on M1 arrested the Mining & Trade Review’s Editor, Marcel Chimwala, when he was overseeing the circulation exercise for the publication.

A police officer signalled Chimwala, who was driving a Mazda saloon, to stop at the far right of the road, but he misjudged the police sign thinking the officer had signalled him to proceed.

The brutal police officers followed him to the bookshop at Puma Service Station, about 100 metres away, where they roughed him up despite his plea to be heard.

The police later detained the journalist in a police cell at Chitsime Police Station and it had to take his colleagues to pay K10,000 to the officers to release him.

The situation occurred after another scenario at Area 24 when a Mining & Trade Review crew was forced out of their vehicle and rounded up by Police when they had parked to drop a colleague after working long hours.

The crew was detained for about 10 hours at Lilongwe Police Station where there were scores of people picked on rogue and vagabond charges.

The Police forced the Mining & Trade Review team, just as the rest of the detainees, to accept the rogue and vagabond charges by harassing and threatening them that they would be sent to Maula Prison if they continue denying the charges but the media persons stood to their ground.

After taking to court the over 50 persons, who were packed in the tiny cell, to be charged with rogue and vagabond, Police released the Mining & Trade Review team.

Of late, Malawi’s media has been awash with reports of brutal acts by police officers which include the beating up of students at University of Malawi’s Chancellor College in Zomba, who were protesting the rise in tuition fees.

The students, who were beaten up by police blocked a convoy of US Second Lady, Jill Biden, who was travelling to Machinga for an official function.

The overzealous Malawi Police are also on record to have shot dead, in cold blood, 20 innocent citizens whose crime was demonstrating for their rights on July 20 2011.

As we went press, Police national spokesperson Nicholas Gondwa was yet to respond to our call for an interview to hear the police’s side of the story on these issues.