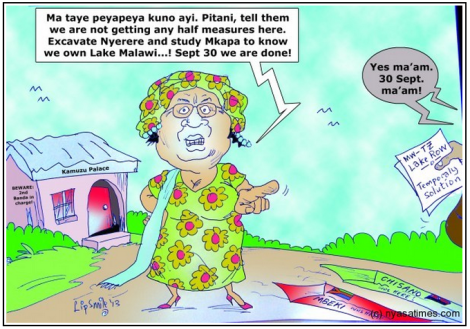 One cartoonist’s impression of the meeting between the mediation team and Malawi’s president Joyce Banda,.Banda refused to sign an interim agreement on the lake dispute (Courtesy of Nyasa Times)

Malawi and Tanzania are still at odds over the ownership of Lake Malawi. This lake, known as Lake Nyasa in Tanzania, is sitting on potentially lucrative oil reserves. Last week, Reuters reported that the Tanzanian government was willing to use military force to defend its territories and linked statements to the border wrangle.

Our army is ready to defend the country’s borders at any time and under any circumstances. All those who will try to invade or violate territorial integrity of our country will get what they deserve. Our country is safe and the army will defend our nation.

Anyone who tries to provoke our country will face consequences. Our country is safe and the army is strong and ready to defend our country. We will not allow anyone to mess with our country, or try to take away our territory. We will deal with them just as we dealt with [former Ugandan ruler Idi] Amin.

This comes two weeks after Malawi’s President Joyce Banda refused to sign an interim agreement with Tanzania. The dispute (view our ongoing coverage here) is being mediated by the Africa Forum of former African Heads of State and Government.

The team, led by former Mozambican President Joaquim Chissano, will make a decision by 30 September 2013. If no resolution is determined, Malawi would like the case to be heard in the International Court of Justice (ICJ), although Tanzania is not a signatory.

Malawi controls the lake’s territory based on a colonial agreement, the 1890 Heligoland Agreement. Tanzania is disputing this although it was upheld by the African Union. Malawi continues to maintain this position. Some Malawian commentators believe we should reason with Tanzania, while others say we should “fight fire with fire” and go straight to the ICJ.

A couple of weeks ago, The Nation, one of Malawi’s two daily national newspapers, ran an exclusive story that the former ICJ President Professor Rosalyn Higgins, QC, backs Malawi’s position. Higgins in 1988 authored a paper for Mobil Energy Corp which wanted to prospect for oil in Lake Malawi through Tanzania. She noted that while the boundary is “complicated”, she believed that “the legal claims of Malawi to all of Lake Nyasa, and the submerged lands there under, is considerably the better claim” based on maps drawn up between 1890 and 1922.

We doubt Higgin’s statement is a “potential game changer” in the lake dispute today as the article asserts. It should also be noted that Higgins became a member of the ICJ in 1995, after she authored the statement on Lake Malawi, and she served as ICJ President from 2006 to 2009.

Nevertheless, the dispute and strong statements issued by the Malawian and Tanzanian governments have not put a stop to shipping and port services between the two countries. However, communities around the lake are more concerned about the costs of oil extraction than shipping.

Bwaia Maxwell has been fishing on Lake Malawi since 1971 and, according to the article published by IRIN News, he does not support the oil extraction

We are not supporting that. And there are thousands of fishermen working on the lake. We live off the lake, and when the oil starts, it will kill the fish, and then we will not have any work. Fishing paid for my children’s schooling and everything else. We won’t allow it, but there is nothing we can do. We don’t have a voice.

They don’t need to take the oil. We earn a living from the lake; it pays for our life. The water we use for drinking. If it is contaminated, it will be no good for us to use.

The dispute between the two countries has been exacerbated by Government of Malawi’s allocation of prospecting licences to two companies, Surestream Petroleum and SacOil. SacOil has undergone significant changes this month with the appointment of new non-executive directors and interim CEO and financial director, following resignations last month over the rejection of a proposal for a debt to equity swap.

The likelihood of reserves may be one of the reasons the former British Prime Minister Tony Blair and his wife visited Malawi last week, at least according to one online commentator. At least we know that this is not the (main?) reason why former US President Bill Clinton is visiting Malawi with his daughter this week.

Further reading: You may be interested to read Tanzanian Dr Antipas Massawe‘s views on how the dispute should be solved with emphasis placed on communities which rely on the lake: