At the end of May 2013, the Tanzanian parliament was told that Tanzania would acquire six passenger ships, which would be deployed on Lakes Malawi (Lake Nyasa as it is known in Tanzania), Tanganyika and Victoria. The Tanzanian Minister for Transport Harrison Mwakyembe’s announcement was followed by a press statement from the Malawian Ministry of Foreign Affairs and International Cooperation urging the Tanzanian government “to desist from launching vessels or indeed undertaking any acts on the disputed territory, as this will jeopardise the current mediation process”.

This debacle comes two months after Malawi’s president Joyce Banda misspoke (political gaffe) saying that Malawi was withdrawing from the mediation process. At the beginning of 2013, the Africa Forum of former African Heads of State and Government under the leadership of former Mozambiquan president Joaquim Chissano set out to resolve the dispute between Malawi and Tanzania over Lake Malawi. The dispute is linked to the oil reserves that lie in the lake bed. Currently, Malawi controls the lake’s territory based on the 1890 Heligoland Agreement, but this may change if Tanzania has its way. Malawi’s government has already awarded two companies, Surestream Petroleum and SacOil, exclusive prospecting licences.

The Malawian government’s press statement, signed by Ephraim Chiume Minister of Foreign Affairs and International Cooperation on 1 June 2013, also highlighted that the Secretary General of Tanzania’s ruling part Chama Cha Mapinduzi, Abdulrahman Kinana, publicly said at a rally that the Tanzanian government is arranging the purchase of ships to launch on the lake before the 2015 general elections. Chiume added that “The Malawi government found these developments unfortunate, especially coming at a time when the mediation process over the boundary dispute is going smoothly”.

According to Tanzania’s newspaper The Guardian (via IPP media), in 2011, then Deputy Minister for Transport, Athumani Mfutakamba revealed plans to purchase a modern ship with the capacity to carry 320 passengers and 180 tonnes of cargo for Lake Malawi at the cost of USD 9 million. Mfutakamba told parliament that afeasibility studies were completed in September 2011 in cooperation with the Danish International Development Agency and that the plans also included the building of a new ship between 2013 and 2015.

Tanzania’s initiative to launch two boats on Lake Malawi was confirmed at the Fifth Tokyo International Conference on African Development held this week, where Tanzania’s Minister of Transport Mwakyembe told The Nation

It is true that we want to buy ships for Lake Nyasa and not Lake Malawi as it has been stated by the Malawian authorities. This plan has been in our ruling Chama Cha Mapinduzi general election manifesto. There are Tanzanians in Mbamba Bay who need to be served diligently by their government. That’s what we are doing and not otherwise.

This latest incident in the lake dispute has led to another flurry of polemic responses from Malawian writers. Patricia Masinga lambasted the Tanzanian government for “just picking a fight” in her piece Green snake in our ‘green waters’ – The case of Malawi Tanzania misunderstanding and has rallied Malawians to oppose the “vexatious Taifas”. Similarly, the Wise One from the East drew an analogy between Tanzania and a bullying, intimidating husband who underestimates his opponent. Henry Chizimba has drawn a peculiar and exaggerated parallel between this dispute and the Israel-Palestine conflict in the piece Bullying: Exactly what Tanzania is to Malawi as Israel is to Palestine published online by Nyasa Times. Chizimba supports this assertion with the observation that Obama is to travel to Tanzania at the end of June where “energy investments will be at the heart of the Obama Tanzania visit”.

One proactive active response has come from former employee of the Malawi Broadcasting Corporation, Benedicto Mbewe, who plans (perhaps in jest) to cycle to Tanzania in protest, and another group of people may want/have to go to war according to this story on The Maravi Post. To explore the colonial legacy that underlies the dispute, public lectures were held on the lake wrangle at Mzuzu University, Malawi, in May 2013; the border dispute is not new and has been going on for 46 years according to Christon Ghambi, a lawyer with CHRAM Associates, who presented during the event. A slightly less antagonistic approach than other commentators has been taken by Malawian lawyer Bob Chimkango who outlines the history of the dispute, concluding that

The Tanzanians are being selfish, they well know we are a landlocked country, and if Malawi is to come with a give and take scenario, they get that side of the lake and give Malawi an equivalent volume of land, that will extend the Malawian territory to the Indian Ocean. Win Win!

Today an online petition was launched in response to the ongoing dispute saga. “Concerned Malawians”  have set up the online petition The National Assembly of the Republic of Malawi: To subpoena President Joyce Banda and Mr Ephraim Mganda Chiume that has so far gained very little traction. It calls on the Malawian government to refer the case to the International Court of Justice and for Chiume to “recuse” himself over “a conflict of interest”. The Petition bases its demands on the evidence that Tanzania is planning to deploy two passenger carriers on Lake Malawi  and on “rumours from high levels sources”. These rumours include,

Our own envoy in this effort, Honourable Ephraim Mganda Chiume is biting more than he can chew from quarters not so friendly to the cause and stance of Malawi on Lake Malawi; and that

The Government of the United Republic of Tanzania is now blackmailing our State President with threats that it will go public with commitments she made to Tanzania which border on treason vis-a-vis the lake during the time of her troubled vice presidency. 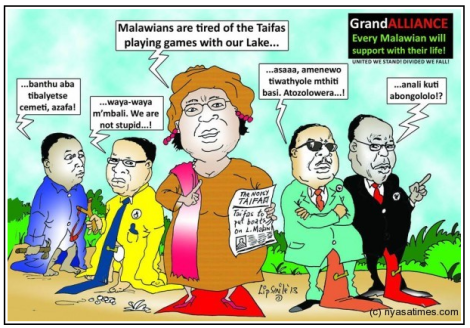 International media houses have been reporting on the lives and livelihoods of fishing communities based on Malawi’s lake shores during the last two weeks.The Guardian reported that the drop of Lake Malawi’s water level which is driving down fish stocks and thus having an adverse impact on fishing communities; the potential to extract oil and gas is cited as an even greater threat to the lake’s biodiversity. Al Jazeera interviewed vendors and a fisherman in Nkhata Bay on Lake Malawi who fear that they will lose access to fishing and produced a 2-minute video (embedded below) that briefly outlines the dispute to date.

The Tanzanian press has also highlighted the impact oil drilling could have on Tanzanian fishing communities. The NGO HakiArdhi, also known as the Land Rights Research and Resources Institute, has worked with communities in southwest Tanzania to help people understand their water rights.

We know that we have agreed to disagree with Malawi on this one, but these communities depend completely on fishing and the lake for their lives. There’s been no consultation at all with us about how we benefit if there is oil here, none at all. How do we gain from this?

We have relatives from Mzuzu, Malawi and were going to attend a wedding (there last year). We are shocked and panicked to find we are making preparations of war against our neighbours. We do not know why this is such big thing amongst our leaders. We heard people were talking, we thought we were free to walk and enjoy life.

This lake should be used to improve the lot and livelihoods of local people, on both sides. The lake is a resource – instead it’s being used as part of a political game to further political careers. There’s no border dispute among the local community, it is a dispute among politicians, a political performance at higher levels, eyeing elections in Malawi in 2014 and Tanzania in 2015. Unfortunately, the local communities are pawns. They lack access to information and education to understand the implications and seriousness of this.

The fate of Lake Malawi remains unclear even though the Africa Forum was expected to have made a decision by now since they were given three months from February to complete the mediation process.