In October 2012, Muluzi’s son, Atupele Muluzi, was selected at the UDF convention to lead the party in the 2014 tripartite elections. Today, the UDF issued a Call for Submissions in The Daily Times on policy recommendations for the UDF 2-day Policy Conference to be held in June 2013, run by the party’s National Executive Committee.

The reason we are posting about the Call for Submissions is because mining is inevitably on the UDF or Muluzi’s “Agenda for Change” along with other areas, such as transparency and accountability and national security that relate to the extractive industries. We hope some of our readers and experts in the field who are UDF supporters will make the most of this opportunity to reflect on current legislation and regulation that guides this industry as well as the country’s overarching National Export Strategy (2013-2018) with focus on the annexes including Vol. 3 Support Plan for Mining.

Papers are called for on the following cross-cutting themes: 1) The Economy – inclusive growth, 2) Governance, 3) Social Protection, and 4) Peace and Security.

These papers will be used “to initiate robust dialogue on key policy priorities to be framed within the core auxiliary and complementary conferences papers”, reads the Call for Submissions. Mining features under the first cross-cutting theme.

The UDF also notes in the Call for Submissions that a party website will soon be launched. We hope this will clearly articulate the party’s vision for the mining sector. The UDF would be well-advised to reflect on Africa’s united action plan for mining, the Africa Mining Vision. 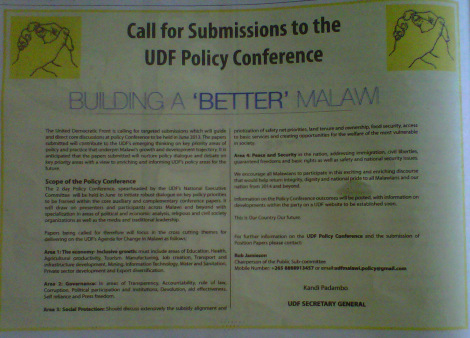