The Technical File by Grain Malunga “Kangankunde Carbonatite: Source of Rare Earths, Strontium and Phosphate” featured below was initially published in Malawi’s Mining & Trade Review Issue Number 35 that is circulated in March 2016.

Kangankunde Carbonatite is a world class deposit containing monazite, strontianite and minor concentration of manganese, barite and apatite. The deposit is capable of being the world’s 3rd largest producer of rare earths. A delineated 2.0 million tonnes of ore containing 6.6% monazite remains unexploited.

The deposit remains unexploited due to a court order arising from ownership dispute stemming from political interference in 2003. Government holds the key to resolving this dispute. 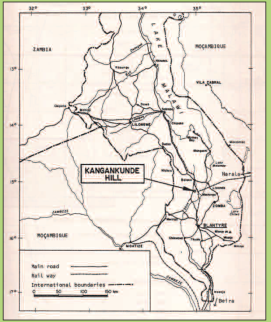 Kangankunde Carbonatite is located in Balaka District along Zalewa road about 80 km north of Blantyre (see Map). It is a low hill rising about 180 m above the Shire Valley plain and is clearly visible to the east from the Crown poultry farm along the Zalewa road. The nearest Trading Centre is Senzani. Infrastructure such as electricity, water, telecommunication and tarmac road are within the vicinity of the deposit. The deposit is situated some 15 km south of Balaka railway station and the main railway junction to the export port of Nacala in Mozambique is situated only 12 km due east of the orebody. Electric power lines of the national grid are situated 5 km west of the orebody and a tarmac (Zalewa) road is 4 km west of the orebody.

The first geological investigation of Kangankunde hill was done by Andrew and Bailey in 1907 when they observed the intrusive nature of the Carbonatite. Dixey visited the site in 1935 when he correlated the hill with the Chilwa Alkaline Province. Deans identified monazite mineralization in the Carbonatite in 1951. Between 1952 and 1956, the Mineral Research Syndicate obtained an Exclusive Prospecting Licence to undertake further exploration work. In 1956 Rhodesia Chrome Mines Limited obtained a Mining Permit which lasted in 1958.

Detailed exploration program was undertaken by Holt between 1959 and 1965 which was the basis for later detailed exploration and pilot processing studies by Warren Spring Laboratory. Between 1968 and 1981 LONRHO did pilot mining studies of the deposit. Work could not continue due to civil instability in Mozambique, a transit of concentrates to the sea. BRGM of France carried out an assessment of the deposit between October 1987 and February 1988. More work was done through trenching, gallery sampling, geological, petrographic, mineralogical study and reserve assessment.

Rift Valley Resource Development Limited (RVRD) obtained an Exclusive Prospecting Licence (No. EPL 086/2000) to review the project with an intention of developing an integrated mining, processing and  irrigation agriculture project (for local farmers) using tri-sodium phosphate, by product from monazite processing into rare earths chloride. The project did not take off due to litigation that arose with their potential joint venture partners, Rare Earth Mining Company, on ownership granting of Mining Licence by government. Rare Earth Mining Company transferred mineral rights of Kangankunde to Lynas Corporation who were later involved in court battles with RVRD on ownership of the deposit. This has in the meantime sterilized the development of the mine as a world class source of rare earths and strontium.

The Kangankunde Carbonatite has been taken as a priority target for rare earths in its low thorium monazite with a grade of up to 15% monazite. A cut-off grade of 6.6% monazite gives a reserve of 2 million tonnes ore within the demarcated area.

This is the main source of cerium, lanthanum, europium, samarium and neodymium. Kangankunde Carbonatite has the ability of providing very large quantities of both strontium carbonate and rare earth chemicals at extremely competitive costs. If properly exploited, it can dominate the price of its commodities in the market. Production of rare earths chemicals from monazite will produce Tri-Sodium Phosphate that can be used in the manufacture of fertilizer to support Malawi’s agro based economy.

Beneficiation results have shown that monazite is well liberated at 125μm using gravity and magnetic separation. A concentration of 85% monazite is achieved through a recovery of about 75% (Lamouille, 1988). A feasibility study is required to prove economic reserves and the value of the project.

As indicated earlier, monazite is mainly common in strontianite carbonatite. Strontianite will form a useful by product during the recovery of monazite. It is estimated that 58,078 tonnes can be recovered within an average grade of 17.9%.

Fostering national economic growth through investment in mining poses a challenge in terms of securing mineral rights due to political interference. The biggest challenge in promoting mining      investment in Malawi lies in lack of security of tenure and an overactive non state actors who lack patriotism and a forum for constructive dialogue.

Government should pioneer security of investment through acknowledging the need to discourage reversal of decisions on operation of business ventures. Any previous government irregularities in decision making can be properly negotiated without interrupting continuity of business undertaking. It is time government mediated to unlock the deadlock of court proceedings between Lynas and RVRD so that mining at Kangankunde should commence.

Any mining at Kangankunde should look at liberating monazite, strontianite, manganese and phosphate. This is a multi-commodity deposit capable of supporting national economy through job creation, promotion of local content and improving tax revenue base

Mining in Malawi Note: For further information on this ongoing litigation and case see: