The piece “Chaponda Jumps Gun – Foreign Minister under fire for interfering with oil search issues” featured below was initially published in Malawi’s Mining & Trade Review Issue Number 36 that is circulating this April 2016.

… Foreign Minister under fire for interfering with oil search issues

A grouping of Civil Society Organisations (CSOs) has lashed out at Foreign Affairs and International Cooperation Minister, George Chaponda, for interfering with oil exploration licences issues which fall under the Ministry of Natural Resources, Energy and Mining.

The CSOs under the banner of the Publish What You Pay (PWYP) Malawi slammed the Minister in a statement released in the wake of the press conference that Chaponda convened in Lilongwe a month ago announcing that State President Arthur Peter Mutharika has lifted a ban on oil exploration effected in November 2014.

Last week, the Minister of Foreign Affairs, George Chaponda, disclosed that the President has lifted the ban. It isunclear why this announcement did not come from the Ministry of Natural Resources, Energy and Mining itself,

reads the statement from the CSOs which also tackled several areas of concern in the governance of the oil exploration subsector in Malawi.

PWYP Malawi is an initiative involving 16 CSOs which are members of the Natural Resources Justice Network.

to ensure that the licences and the agreements that were signed are for the benefit of the people of Malawi and were done in accordance with all the relevant laws of the country.

Chaponda said the lifting of the ban was a well thought path that Mutharika had picked to allow the oil exploration subsector play its important role in the development of the country.

The Minister explained that the lifting of the suspension was necessitated due to growing interest in Malawi by oil and gas exporters such as Georgia and Kazakhstan.

In an apparent response as to why he was the one announcing the lifting of the ban instead of the line minister, Chaponda explained that prospective investors are showing interest to explore for oil in Malawi and that he personally held discussions with several of them.

However, though the Mutharika administration is courting new investors into the oil exploration subsector, licences for all the six blocks were already awarded to expatriate firms which include South Africa’s Sacoil Holdings for block 1, Hamra Oil for blocks 2 and 3, Rakgas MB45 for blocks 4 and 5 and Pacific Oil Limited for block 6.

The government under the previous Joyce Banda led administration signed petroleum sharing agreements for blocks 4 and 5 with Rakgas MB45 and for block 6 with Pacific Oil Limited.

The news of the coming in of the new investors has, therefore, created panic in the subsector with some players fearing that ruling party politicians want to take advantage of the new players to bulldoze their way to acquire shareholding in the tenements.

But Chaponda insisted that the ‘new entrants’ will only be integrated as technical partners to the tenement holders.

However, it is unclear what legal instrument the Mutharika administration will use to force the tenement holders to incorporate the ‘new entrants’ as technical partners.

Meanwhile, the Ministry of Natural Resources, Energy and Mining has confirmed giving a go-ahead to all tenement holders except Rakgas MB 45 to resume prospecting for hydrocarbons.

We have given an okay to all the firms. We are only negotiating with Rakgas because they are some issues we have to sort out with them on their licences,

Greed for oil wealth by powerful politicians is one of the key factors that lead to resource curse in many resource rich countries across the globe. 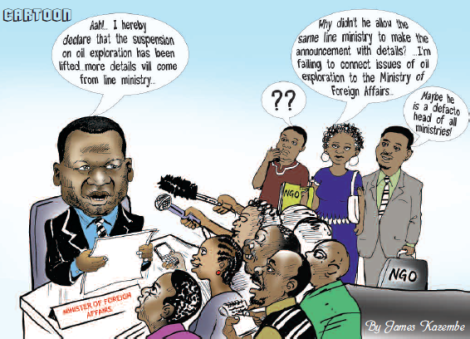