Sovereign Metals Limited, an ASX-listed graphite exploration company, is currently carrying out a detailed exploration programme 15 kilometres east of Malawi’s capital city Lilongwe in the Central Malawi Graphite Project. The Project covers over 7,000 square kilometres within three tenements. Following a scoping study of its Duwi Trend, the company has announced that the

According to the company’s announcement from 1 September 2015:

The Study confirms Duwi can support a Base Case scenario with graphite concentrate production of ~110,000 tonnes per annum over an initial mine life of 20 years: 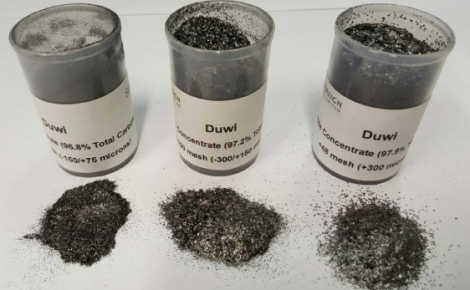 Last week, on 16 September, the company further announced that metallurgical results from Duwi “demonstrates that very high grade concentrates […] can be produced with a combination of comminution and flotation techniques only”. Testing was conducted by SGS Lakefield, Ontario, in Canada. Highlights of this announcement are:

Sovereign Metals has so far identified 50 targets including six prime, large, high-grade, flake graphite targets: five within EPL0372 (referred to as the Duwi Trend) and the Nanzeka Prospect within EPL0355. The Central Malawi Graphite Project has the benefit of being surrounded by established infrastructure including high capacity power lines, rail, roads and a port which is currently undergoing a major expansion. This is crucial at a time where there is a energy deficit in Malawi, which has adversely affected mining operations in the country. 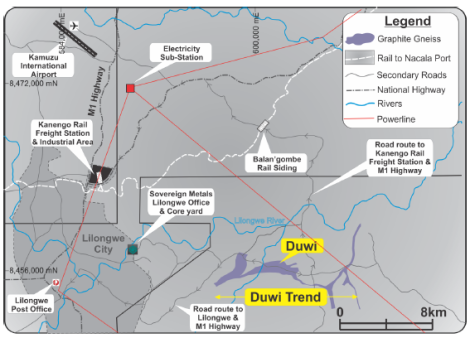