On Monday 27 May 2013, the annual African Economic Outlook 2013 was launched with the message that “Natural resources can fuel Africa’s economic transformation”. Social, economic and political developments of 53 of the 54 countries in Africa, including Malawi, are examined. The report produced by the African Development Bank, the OECD Development Centre, United Nations Economic Commission for Africa (UNECA) and the UN Development Programme mirrors the message conveyed through the latest Africa Progress Report that focused on harnessing the extractive industry for socio-economic development. This is a common theme at the moment. UNECA and the African Union Commission will launch their 2013 joint economic report on Africa “Making the most of Africa’s commodities” in just over one month.

The economic outlook for the continent is positive in 2013 and 2014 and Africa’s economy is projected to grow 4.8% in 2013 and 5.3% in 2014. The pace of growth and structural transformation will be influenced by how countries tap into their natural resources and ensure the benefits are shared. However, “growth is not enough” Director at the OECD Development Centre Mario Pezzini explains. Economic growth has not been accompanied by adequate poverty reduction, increased employment opportunities and diminished inequalities.

The current economic situation in Malawi and its relationship with the mining sector is succinctly described in the Outlook (see below for more in-depth reporting of natural resource-based structural transformation in Malawi),

Malawi recorded strong average growth of 7.1% from 2006 to 2010, supported by sound macroeconomic management and improvement in smallholder agricultural productivity. However, real GDP growth slowed down to 4.3% in 2011 on account of  shortages in foreign exchange, fuel and power. This in turn weakened performance in import-dependent sectors, notably manufacturing, construction, mining, transport, retail and wholesale trade and services. The deceleration in growth occurred against a backdrop of growing external and internal imbalances, resulting from macroeconomic policy slippages and the suspension of donor budget support. Real GDP growth in 2012 fell further to 2.0%. The sharp slowdown in the economy in 2012 was due mainly to the contraction in the agricultural and manufacturing sectors. Growth in other sectors remained buoyant, but it was not sufficient to offset the decline in agriculture and manufacturing. After rebounding in 2011, the agriculture sector, which accounts for 33.0% of GDP, recorded negative growth of 3.0%. Maize and tobacco output was constrained by droughts in the southern part of Malawi and the fall in tobacco auction prices, which were driven down by action taken by the international anti-tobacco lobby.

[…] The deterioration in the business climate contributed to the contraction in manufacturing activities. In contrast, the mining, construction and services sectors performed strongly. Mining and services grew at 22% and 46%, respectively.

[…] The mining sector in 2013 is expected to grow at 14.1%, boosted by expansion in coal, quarry and cement production and the commissioning of the Kanyika niobium mine. Over the medium to long term, mining is poised to increase its contribution to the Malawian economy, as new mines are established and the Kayelekera uranium mine enters its second production phase.

Natural resource-based structural transformation is pitted as important for improving sustainable development across the continent. This involves “the reallocation of economic resources from activities with low productivity to more productive ones”. Commitment of partner governments and investors to transparency, export of goods from Africa and multi-stakeholder dialogue along with improved cooperation and access to markets among African nations will drive the structural transformation heralded by the Outlook. As Pezzini articulates

African countries must provide the right conditions for turning natural resources into jobs, optimise their resource revenues through smart taxation and help investors and locals to make the most of linkages.

A four layer policy approach is suggested for structural transformation (see image below): 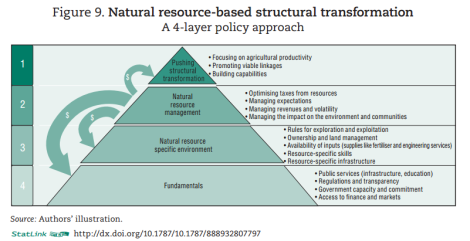 Malawi is endowed with diverse natural resources, ranging from land, water, forests, livestock and minerals. Land is the most valuable resource for Malawi in view of its agro-based economy. Most of the land is used for food production, mainly maize and tobacco, which is Malawi’s main export commodity. Out of a total land area of 9.43 million hectares, 36% is under forest cover, including forest reserves and plantations. Malawi has used its forestry resources to support agricultural and other economic activities, such as wood processing industries for local and regional markets and construction. Lake Malawi is another natural resource that can be harnessed. The lake supports fishing and tourism and has potential to provide water for irrigation. Among Malawi’s mineral resources are uranium, rare earth minerals and coal. The first large-scale commercial mining operation, the Kayelekera uranium mine, commenced operations in 2009. Since then interest in Malawi’s mining sector by foreign mining companies has grown, leading to expansion in mineral exploration. The government plans to establish more mines over the next decade. A niobium mine at Kanyika is expected to be operational by 2014. It has also awarded rights for oil prospecting in Lake Malawi. However, prospecting for oil has been put on hold pending resolution of the territorial dispute with Tanzania.

[…] The challenge facing Malawi is balancing growth and economic transformation with the sustainable management of its natural resources. Natural resources such as minerals, for example, offer significant growth opportunities.

The structural transformation of the Malawian economy over the past two decades has been limited in spite of the country’s diverse natural resource base. Agriculture remains the mainstay of the economy, while the country’s exports consist largely of primary commodities. Moreover, there has been little value addition to primary commodities, rendering the economy vulnerable to trade shocks. Manufacturing, which used to contribute 15% of GDP two decades ago, has seen its share decline to 10%. The slow pace of structural transformation is partly reflective of weak policies, distorted incentives and an absence of strong institutions to promote investment in new economic activities to respond to emerging global and regional market opportunities.

The thrust of the government’s MDGS II and the ERP is to foster economic diversification toward other natural resource-based economic activities and sectors to drive growth. Mining, forestry, and tourism offer the most significant opportunities. The focus on this diversification is particularly critical for the country to ensure more balanced and sustainable growth. While promoting other sectors, agriculture will continue to play a central role in driving Malawi’s growth over the medium to long term.

Given the onset of uranium mining in 2009, the mining and quarrying sector is also likely to play an important role in Malawi’s economic growth and exports. The mining sector has grown by an average of 30% over the last five years and further investments are expected in the future. While the returns in mining are potentially high, the sector poses major challenges, partly related to the isolated nature of mining activity. Foreign exchange earnings from uranium are projected to reach USD 200 million by 2014. Without sound governance and regulatory frameworks, the rent from mineral exploitation could turn out to be more a curse than a driver of growth. To address these challenges, the government has adopted a new National Minerals Policy and is developing a regulatory and legal framework to avert negative social and community impacts and ensure a fair redistribution of mineral revenues to the central government and to local communities. The government is also implementing a minerals governance programme with the assistance of its development partners, and it has shown interest in signing up to the Extractive Industry Transparency Initiative (EITI).

For further information on the vision for structural transformation based on natural resources proposed in the 2013 African Economic Outlook, read this short blog post put together by Jan Rielaender, an OECD economist.