If it were up to Kamuzu Chibambo, a lawyer by profession, Malawi would be entering its third liberation movement which would involve improving the benefits of extracted and exported mineral wealth found in Malawi.

Malawi has for many decades now been gripped in economic bondage of gigantic magnitude. This pathetic and heart-rending reality has been fastened to the people of Malawi despite the country changing leaders and governments since 1964, 1994, 2004 and most recently 2012. The country notwithstanding that it is richly endowed with a vast body of fresh water, exquisite scenic sites, good soil and natural resources to date remains classified as one of the poorest in the world with the majority living on less than 1 dollar a day as economists have pronounced.

Chibambo, president of the opposition party, People’s Transformation Party (PETRA) launched the third liberation movement for Malawi in Blantyre yesterday amidst calls for Joyce Banda’s government and Paladin to renegotiate a mining agreement made for rights to extract uranium from Karonga at a mine called Kayelekera. In fact, he has given the government and company a 14-day ultimatum to explain why the deal cannot be renegotiated.

He demands that a renegotiated contract will increase the current 15% government stake to 40%. This is not the first time there have been calls to renegotiate the deal between the two parties; we blogged about MP for Thyolo Thava Lifred Nawena’s allegations against Paladin in early December last year.

Chibambo questions Paladin’s announcements that the company is making a loss when he presents further demands. Indeed, last month, Paladin Africa’s General Manager, Greg Walker, explained that “the project has never made money”. This has caused outrage among civil society organisations and was recently queried at the Malawi Economic Justice Network (MEJN) and the African Forum and Network on Debt and Development’s (AFRODAD) “Experiences on Revenues: The Role of Parliamentarians and Civil Society in Transparency and Responsible Finance in the Extractive Sector” conference in Lilongwe in December.

We give Paladin and the Government of Malawi 14 days from today to show cause why the deal cannot be renegotiated for the benefit of the people of Malawi for a 40% stake and selling rights in respect thereof. We in PETRA do not believe a single bit that Kayelekera Mine in Karonga is a loss-making venture. It should have been long closed down if that were so.

We demand the shareholders therefore to disclose the price our uranium is fetching when it is finally sold to the ultimate buyer in Australia or Switzerland. That will clearly prove the veracity of claims continued to be made locally [that the company is making a loss].

Health and environmental risks posed by operations at the mine are also included in PETRA’s ultimatum. There is little available evidence on the human impacts of the uranium mine in Karonga although Marty Otañez, Assistant Professor at the Anthropology Department, University of Colorado, Denver, produced a documentary Yellowcake Rising on labour, human and ecological costs of the mine three years ago.

Within 10 days, we want to know from Paladin and Malawi Government as to which health facility our brothers and sisters are being taken for treatment whenever they are exposed to radiation which we know is happening? Is the treatment adequate?

What measures have been put in place to stop pollution seeping into Lake Malawi? Has this been certified by the International Atomic Energy Agency (IAEA)?

Walker is already on record for saying that it is impossible to renegotiate deals. Civil society does not agree. For example, AFRODAD Executive Director Collins Magalasi said at the conference held in Lilongwe that the

Malawi government needs to look back at the contract and renegotiate for a better deal which can benefit the nation including the communities where the project takes place.

Chibambo may not like and may not agree with the Mining Development Agreement as it stands between the government and Paladin (although it is unlikely he has seen it because it is bound by a confidentiality agreement), but it is not clear what he intends to do should the government and the company not respect his 14-day ultimatum to renegotiate and increase Malawi’s stakes in the mine. He believes that “it must be done. Nzotheka [it’s manageable]”.

Update 16 January 2013: Today, Malawi’s The Nation reported on the Government’s response to PETRA’s demands. The Minister of Mining, John Bande, who has recently been caught up in a scandal with the seizure of an orphan care centre according to the press, said in an interview with The Nation

Where was Petra when the Kayelekera deal was negotiated? The PP [People’s Party] government has separated mining from Energy Ministry and the minister is studying all the mining contracts on the ground including Kayelekera.

Giving us ultimatums is not good for the country. The Joyce Banda administration should be given time to sort out things like those.

Update 17 January 2013: Walker, in an interview with the media, asserted that Paladin would not renegotiate the contract. The Face of Malawi has quoted him as saying,

We will not renegotiate the agreement. And people think that terribly unreasonable. But it is not. The fact that Malawians think they got a raw deal doesn’t necessarily mean they did get a raw deal.

He went further to explain what he perceives are the risks of investing in Africa and that calls to renegotiate the deal would not be looked upon favourably by other investors. He also notes that Malawi’s government had the opportunity to send the company packing before the Mining Development Agreement was signed.

One of the biggest risks for companies investing in Africa is that you come in and spend your money and once you have spent, government changes the rules. So one of the things we said was that give us some comfort. So one of the things included in the development agreement is that the government will take no action that will seriously change the financial aspects of this project for a period of 10 years.

They could have said we don’t like what you are doing and you can take the money and go home. We are not prepared to give you that. Did they do that? No. They said okay, we understand that you guys need stability for the first 10 years of the project. So we signed an agreement with the government under which the government of Malawi gave its undertaking

As a result of the confidentiality agreement, we can only guess at the things the company and government “doesn’t like”.

Today also sees national demonstrations against the rising cost of living, organised by the Consumer Association of Malawi, which includes the submission of a petition to Joyce Banda through city councils across the country. Bright Mhango, a Malawian journalist, tweeted, 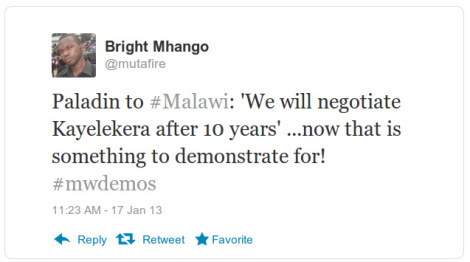