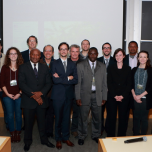 Chiwona (fourth from right) at the first International Workshop on Alternative Potash at Massachusetts Institute of Technology, (Boston, USA) 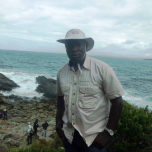 Chiwona in the field (New South Wales, Australia) where he completed his Master of Science in Geology

This week, Mining in Malawi had a chance to catch up with Malawian geologist Annock Gabriel Chiwona, a Fellow of the Geological Society (FGS), who is currently pursuing a PhD in Geology/Geochemistry at Newcastle University in the United Kingdom.

Through his work and studies, Chiwona seeks to contribute towards modern mineral exploration and geological research in Malawi to propel the sector and country forward. He has also just returned from the 35th International Geological Congress held in Cape Town where he presented a paper on using geological resources for agriculture.

Take a look at his co-authored poster and presentation on crushed-rock and potash fertiliser in Africa.

1. What is your usual job and what research are you doing with Newcastle University?

I am a Chief Geologist with the Geological Survey Department in Zomba which includes both technical and managerial duties. My work involves coordinating field geological, geochemical and mineral exploration and research including applied geological research using remote sensing and Geographical Information Systems (GIS) Airborne geophysics in mineral exploration. I also conduct and lead geological research and mapping projects which include assessing the economic and sustainable use of industrial minerals. Another important area of work is assessing, analyzing and mitigating geo-hazards. I also carry out environmental and town geology assessments and provide advisory services and for the last few years I have been part of a team, which conducted Mzuzu City’s town geology mapping for urban structure development. I am also very actively involved in providing advisory services to the general public on geo-scientific matters as well as promoting Malawi’s mineral sector at various forums both locally and internationally.

Turning to my doctoral studies at Newcastle University, my research involves using airborne geophysical gamma ray data combined with satellite remote sensing (and GIS) techniques for identifying and delineating nepheline syenites in rift tectonic settings which could be suitable as sources for potash silicate fertilizers for agriculture. Currently, the focus is on the East African Rift System (EARS) beginning with Malawi but the techniques we are developing could be transferred to other similar areas anywhere in the world.

2. You are currently attending the 35th International Geological Congress where you presented on “Rocks for Crops” or Agro-geology. Could you explain what this is?

Well, my paper was actually entitled “Novel potash fertiliser from nepheline syenite for Africa’s agricultural growth” but one may indeed bundle this into four words: “Agro-geology: Rocks for Crops”. This may sound quite a new concept to many people but all we are advocating is the idea of using geological resources (rocks) to provide solutions to many problems in agriculture especially fertiliser. Many people will agree that use of fertiliser is vital for increased yield in agriculture especially now when the global population is increasing while the land remains the same. This means we have more people to feed but the same limited land which means that food insecurity is a fast emerging major global challenge and a challenge for Malawi.

It has also been noted that food production cannot meet the demand especially because the world population was about 7 billion in 2011 and is projected to reach 9 billion by 2040. Africa’s population is expected to double from about 1 billion in 2011 to about 2 billion in 2040 (Figure 1 below).

Food insecurity is made worse because the conventional fertilisers on the market are restrictively very expensive. This means that many poor farmers especially in Africa are not applying fertiliser to their crops. Consequently, there is significant soil ‘mining’ by farmers where plants are forced to get nutrients from the soil yet these nutrients are not replaced in the soil and with repeated cultivation on the same piece of land the soil is left depleted of their natural nutrients resulting in a very poor land in terms of soil nutrients. This is where agro-geology is important and can help solve the fertiliser challenges being faced by Governments and the agricultural industry. 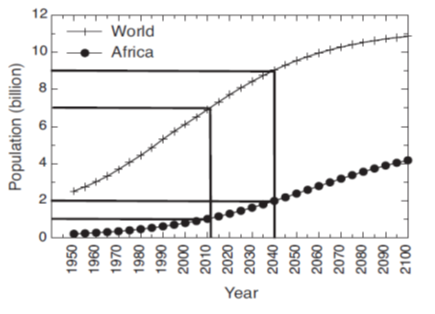 My study focuses on identifying alternative potash sources for fertliser because this is a critical need for many countries although for most countries, including Malawi, the perceived nutrient demand has long been Nitrogen and Phosphorus. Due to this perception even our fertilisers like NPK (23:21:0) contains no (0) potassium against 23% Nitrogen and 21% Phosphorus. This means crops mainly get natural K (potassium) from the soil. A 2002 global soil nutrient audit noted that almost all but four African countries are depleted in potassium hence the dire need for replenishment of the soil nutrient depletion (Figure 2 below).

This is because potassium is produced mainly by three non-African countries Canada, Russia and Belarus. Over 90% of the potassium reserves are in the Northern hemisphere which means the Southern hemisphere has to import potassium from these countries, and consequently, the price of potassium fertiliser is very expensive because it is also controlled by the producers.

3. What examples of producing minerals for agriculture do we have in Malawi and the region? To what extent is Malawi already involved in promoting agro-geology?

Phosphorus is mainly derived from phosphate rocks which contain apatite. In Malawi, Optichem is using this at Tundulu but we also have Apatite resources in areas like Mlindi (Neno) as well as the Chingale area in Zomba. Potassium is derived from deposits of potassium salts and some potassium silicate minerals such as K-feldspar, nepheline, leucite, muscovite. Therefore, in terms of exploration, the target would be rocks containing these minerals but our study is targeting nepheline syenite because nepheline has shown to have a very high dissolution rate (in other words it releases its potassium more quickly than other silicate minerals).

4. What are the benefits of this kind of mineral production?

Benefits are so many of this kind of mineral production. To begin with, food security is a major policy goal not only for Malawi but for every Government. Again, agriculture and mining sectors have in many cases been viewed as sitting on opposite ends. Agro-geology therefore, brings bridges between these two sectors. Most importantly, our technology offers farmers easy to use low cost techniques that are environmentally friendly and locally available alternatives for the conventional commercial fertiliser.

5. What is the potential of agro-geology for Malawi in particular?

The benefits for Malawi are just too numerous. Briefly, Agro-geology offers new opportunities for foreign direct investment into Malawi, as well as business and employment opportunities for women and the youth as they can engage in small-scale mining and production of these nutrients from the rocks in their areas.

More specifically, if this study on the use of nepheline syenite as an alternative potash is successfully completed, local people will be trained on the technology so that they may advance their employment and business opportunities. Malawi has many nepheline syenite intrusions hence the Government will greatly benefit as there will be reduced fertiliser imports and with the ever continuing global economic challenges this could cushion expenses for the government’s fertiliser subsidy projects. Therefore, this study offers to contribute greatly to Malawi’s achievement of the Sustainable Development Goals through many ways.

6. In the next 5 years, how can agro-geology grow in Malawi? What do you hope your role can be in this?

Agro-geology as a field has potential to grow extensively if there is more technical collaboration among various researchers in this area. There is need for geologists, soil scientists, geochemists and other researchers both in academia and other research institutions to collaborate and work together in this area. There is also need for more funding for geological research in areas like these. Malawi cannot develop if research in science and technology is not given priority. If due support is given, this technology can extend to other nutrients (not only potassium) and the products can be exported to other countries since fertiliser demand is high all over the world.

My role will be to continue research in this area, establishing technical collaborations and networks as well as supporting the Geological Survey’s mandate of providing advisory support to the public, clients and other institutions in this area. Let me conclude by stating that some investors and other researchers from countries such as Brazil, USA and Cameroon are already expressing great interest in this study.

One response to “Rocks for Crops: Interview with Annock Chiwona, PhD Student and Chief Geologist in Malawi Geological Survey Department”