A Scoping Study on the Extractives Industry Transparency Initiative (EITI) has questioned the absolute powers provided to the Minister of Natural Resources, Energy and Mining in the Petroleum (Exploration and Production) Act 1983 , which the country is currently applying in the governance of the oil and gas subsector.

The Act has deficiencies regarding the modern day transparency and accountability arrangements as it recognizes no authority other than the Minister responsible and the Commissioner (of Exploration and  Production) the latter being singlehandedly appointed by the Minister so that at the end of it all, the Act is entirely administered by the Minister,

The Petroleum Act provides for, amongst other administrative and institutional arrangements, the licensing and regulation of private operators who are expected to pay the following fees; application fees, assignment fees, ground rent, training fees and social contribution with respect to exploration and production licences.

Payment of royalty is mandatory but the rate is at the discretion of the Minister as well as the mode of payment, and it can be non-monetary,

The report points out that the Act promotes lack of transparency in oil and gas transactions as it contains a provision that information cannot be disclosed without the consent of the licence holder and a fine or prison sentence awaits violation. 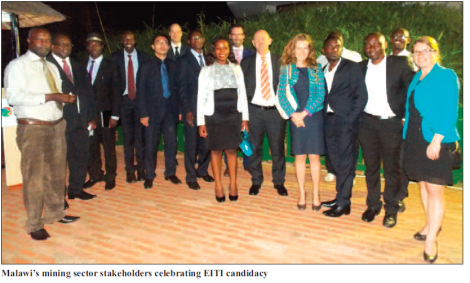 However, the Commissioner has rights to waive this provision in connection with individuals carrying out their duties.

One needs to be careful about what information this provision covers. For example, payments to government may not be in this prohibition; these can and must be disclosed through government receipts in accounting and budget records of government but ownership and all other transactions not related to government may be a problem to declare without consent,

There are no legal reforms envisaged for the petroleum sector in the immediate future but, according to Acting Director for the Department of Mines Atileni Wona, the Petroleum Act shall be the next to be reviewed once the reviewing process of the Mines and Minerals Act has been finalized.

But, according to the report, controversy has continued since 2014 on the awarding, suspension and operation of the granted licences including the petroleum sharing agreements.

This constituted a hindrance to the dialogue with licence holders during the scoping exercise, and would substantially affect EITI reporting,

However, Wona confirmed to Mining & Trade Review that all the tenement holders are fulfilling the legal requirements in making the social contributions.

Malawi is currently a candidate country of the EITI and authorities are pushing for the country to attain compliance status.