At the beginning of April, the president of Malawi Joyce Banda expressed concerns that the Africa Forum of former African Heads of State and Government‘s mediation of the dispute between Malawi and Tanzania over Lake Malawi (or Lake Nyasa as the waters are known in Tanzania) had been compromised. Consequently, she explained that the case should be instead resolved by the International Court of Justice.

Banda’s statements were made over dissatisfaction with the role of  a Tanzanian national, John Tesha, in the Forum. Tesha, the Executive Secretary of the Forum, allegedly leaked to the Tanzanian government Malawi’s submission of its official position on the dispute that was given to the Forum. In fact, The Sunday Times reported in March that the Malawian government was unhappy with Tesha’s presence, stating that he may compromise the resolution process.

However, a few days after Banda said that waiting for the Forum to make a decision was “a waste of time“, the Government of Malawi through the Ministry of Foreign Affairs and International Cooperation issued a press statement indicating its (re)commitment to the process and the Forum.

The Government of Malawi has trust and confidence in the Forum, whose members are men of high integrity, and believe that the matter will be handled with professionalism and objectivity that it rightly deserves. Malawi’s commitment to the mediation efforts cannot be overemphasized.

The ministry is confident that the Forum will give this concern [the Tanzanian national’s position in the Forum] the necessary attention. The government is very committed to the mediation process and that is why the concern was raised so that the process should be deemed free and fair.

The Forum is chaired by former Mozambiquan president Joaquim Chissano, and Botswana’s and South Africa’s former heads of state, Festus Mogae and Thabo Mbeki, respectively, are also on the panel. The eminent Ugandan jurist, Prof George W. Kanyeihamba, was invited last week by Chissano to assist in the resolution.  The Forum was given three months in January 2013 to settle the dispute.

I would like to make it clear that the training is not in any way linked to the lake dispute. There are other channels that are properly handling the matter. 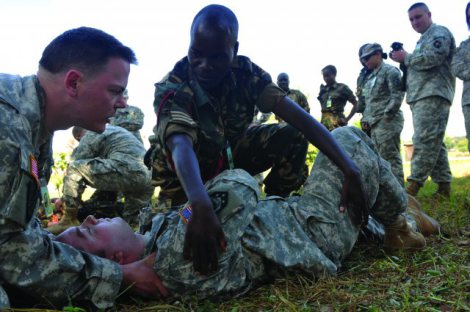 Previous collaboration between the US Army and Malawi Defense Force (2011): Soldiers from the 399th Combat Support Hospital instructed Malawi Defense Force medical staff and Soldiers from the 404th Maneuver Enhancement Brigade, at the Kamuzu Barracks, on a variety of procedures to help them better respond to combat-related injuries. (Courtesy of US Army)

On the 5 April 2013 which marked one year since Malawi’s third president Bingu wa Mutharika died in office, many commentators reflected on the life of the former president. One Malawian blogger Pearson Nkhoma implied in a scathing post “Should We Celebrate Bingu’s Death or Life” that Mutharika has instigated the dispute with Tanzania for personal gain.

The Citizen, an online newspaper in Tanzania, claimed, not in verbatim, that Bingu had on purpose reached an agreement and set up plans to discuss with Tanzania to officially give a portion of the lake to the Tanzanians but without letting Malawians to be aware of this move. According to the Citizen, his death messed up those plans.

Being someone from the Lake District, I have no problems in dividing the lake for all sides need to benefit from it either by dividing it or making gentleman’s agreements. The only problem I have is keeping Malawians on the dark side.