Where does the money go? Sharing mining revenues with District Councils

Revenue utilisation and management is key in ensuring mining contributes to needed socio-economic transformation. There are many potential ways residents in mining areas derive resource benefits (see the image below). These residents from districts that are home to mining projects argue that benefits should accrue to their areas and they should be compensated from possible environmental and social disruption. This is one of the drivers for the global move to allocate non-renewable natural resource revenues to sub-national governments such as District Councils. 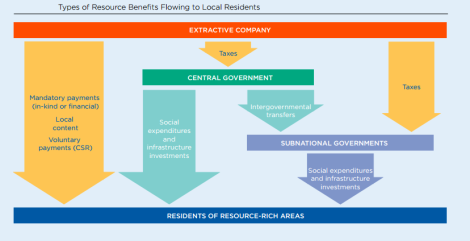 At present, revenue mobilised through Malawi’s small extractives sector feeds into the Government’s consolidated account, “Account Number One”, and is then used in financing the national budget that our parliamentarians pass each year. This means revenues generated from non-renewable resources, such as from uranium and coal, and revenues from other sectors, such as our income taxes, are distributed in the same way. Arguably, this is because revenues from mining are relatively small. According to the recently released Annual Economic Report (2016) produced by the Ministry of Finance, Economic Planning and Development, mining revenues contributed a small 0.9% to GDP in 2014 and 2015.

Nonetheless, as we consider the potential of a growing industry and more positive outlook for commodity prices,  the discussion on how money is used and if and how Districts are involved in revenue utilisation will become more pertinent. Malawi’s Extractive Industries Transparency Initiative has the opportunity to provide data to inform our debate on revenue utilisation and later, if transfers are made to Districts, to track these sub-national transfers. 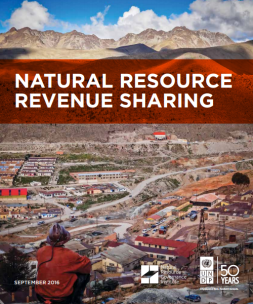 Given the proliferation of the mechanism to transfer public finances raised from extractive industries from central to district governments, a study to understand this mechanism was undertaken by the United Nations Development Programme (UNDP) and the Natural Resources Governance Institute (NRGI). The culmination of this study was the report Natural Resource Revenue Sharing, released in September that examines 30 countries that have specific rules governing the distribution of natural resource revenues as distinct from other revenues.

The report includes countries like South Sudan, Ghana, Ethiopia and the DRC where transfers are made on the basis of the area of origin or adjacent areas and a few countries, like Uganda, Mexico and Ecuador, which determine the distribution of natural resource revenues on the basis of indicators (e.g. population size or income level) regardless of where natural resources are extracted. Countries including Canada, China and Australia have a different set up where subnational governments collect significant revenues directly from extractives companies and these revenues then make up the local budget.

These resource revenue sharing systems can raise standards of living and reduce poverty in resource-rich regions, provide additional financing for governments in poor or underserved regions, and compensate affected areas for the social and environmental impacts of exploitation and depletion of natural resources. […]

There are challenges with these revenue sharing systems. For example, the reliance on taxes linked to mining, oil and gas projects may be volatile given the nature of unpredictable fluctuations in commodity prices. There may also be failures in revenue sharing where District Councils are mismanaged, there are attempts to gain control over local municipalities in mining areas, and poorly designed systems are in place that exacerbate regional inequalities.

Drawing on their review of revenue sharing regimes, UNDP and NRGI provide the following 10 broad recommendations, some more obvious than others, that we should consider when planning how revenue will be shared in Malawi.

The piece “Eye on Malawi’s EITI: Where does the money go? Sharing mining revenues with District Councils” featured above was initially published in Malawi’s Mining & Trade Review Issue Number 42 that is circulating this October 2016.