Tonse Tipindule, a mining governance project supported by Tilitonse Fund is registering notable success in improving the once hostile relationship between mining investors and members of the communities in areas where mining activities are taking place.

This is according to the Qadria Muslim Association of Malawi (QMAM), which is implementing the project which involves local level interventions on mining issues, in the districts of Mangochi, Balaka and Ntcheu.

QMAM says its evaluation of the project shows that so far, the impact is much in line with its goal which is to contribute to a transparent mining regime that benefits the people of Malawi through improved social inclusion, accountability and responsiveness among duty bearers in mining sector.

According to QMAM’s Tonse Tipindule quarterly technical report compiled by Project Officer for Extractives Biswas Ismael, the project is gradually instilling genuine spirit of understanding, tolerance and co-existence between mining investors and communities in its three targeted   mining districts.

The effectiveness of the project has come about because of the non-confrontational approach we have taken, which largely emphasizes on need for dialogue, tolerance and understanding between investors and communities,

Further he says the cordial atmosphere which has been created between investors and communities has resulted in both sides mutually benefiting from mining projects.

Ismael says his organisation has so far facilitated meetings between companies and community leaders that have substantially strengthened the relationship between the two parties in so doing removing the aura of mistrust and enhancing understanding.

The result of this cordial relationship is that the investors have responded to community needs and have   undertaken a number of corporate social responsibility projects that are benefitting the communities,

Prior to these meetings, the association empowered the members of the community to engage the investors through capacity building workshops for community structures. The process created local action advocacy groups on mining policy which were equipped with crucial skills to provide guidance to their respective communities.

QMAM also conducted sensitization meetings with communities on Corporate Social Responsibility (CSR), which has led to the increased knowledge on how Community Action Groups (CAGs) and community leaders can engage with investors and district officials on mining issues.

The programme empowered communities with   knowledge and skills that have helped them to make right choices when proposing development projects to investors,

The indabas conducted in Mangochi and Balaka drew together a diverse of participants among them traditional leaders, members of CAGs, Village Development  Committee (VDC) Area Development Committee (ADC) and District Education Committee (DEC); faith leaders, mining companies, representatives from the departments of Mines, Geological Survey and the Civil Society. 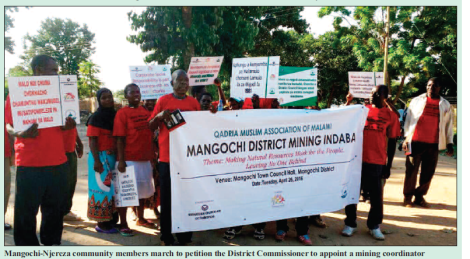 According to Ismael, the Mangochi indaba registered instant success in the sense that a petition was delivered to the District Council which resulted in the appointment of an interim district mining coordinator to oversee mining activities at district level.

There was no link person at a council level whom the communities could liaise with on mining issues, and the organisation managed to empower the communities to request the appointment of the District Environmental Officer to serve as interim personnel to oversee mining related issues,

The Indabas also provided a platform for mining companies to share their concerns and make clarifications on certain pertinent issues. For instance, Cement Products Limited (CPL), a company that has mining rights for limestone at Mayera Village but has a factory plant in the neighbouring Njereza Village used the gathering to inform the people of its key boundaries, effectively preventing community encroachment, which has led to tension and eventually conflicts in other areas.

Before QMAM’s interventions through Tonse Tipindule project, people in the area had no clue on what CPL was initially up to in their area. They were just surprised to see strangers with tools, going around, drilling holes in their gardens and nearby bushes, showing stones to each other and taking notes,

Factory works started in the area in early 2009 though the chiefs were still not consulted and when they sought clarifications, they were told that CPL had now been given a license to open a limestone mine in their area for cement production.

Upon hearing the word ‘government’, the people were hopeless and conceded defeat without asking further questions because of fear until four years later when QMAM went to the area with Tonse Tipindule project and established channels of engagement between CSOs, citizen, government and mining investors which enlightened the people of their rights, roles and responsibilities on the mining activities happening in their area.

This has resulted in the recognition of the communities by the company which is now hiring members of the community through community action groups, instead of a foreign contractor, to provide sand and stone as part of a good gesture towards the people of Mayera area.

CPL has also procured a cooking oil processing machine for the Mayera communities as a way of economically empowering the community and is constructing a structure to house the machine.

This underlines how strong the investor-community relationship has grown through the interventions of the Tonse Tipindule project,

Similar success stories for the project are also visible in Balaka and Ntcheu where the same approach has resulted in interface meetings between stakeholders on mining issues.

The QMAM report says in Balaka an action point was developed which proposes how mining activities should be carried out and monitored at district level.

However, unlike in Mangochi, the project team is yet to receive feedback from the District Commissioner on the appointment of an interim coordinator to oversee mining issues and the proposed action points.

But Ismael says progress is being made on other equally important issues citing that there is now an agreement between district councillors and community members which stipulates that every company must follow community development plans in any CSR initiative, a proposal that has received positive response from some mining companies operating in the area.

He said ZALCO, which has limestone mining operations at Chemkumbi Hills had a meeting with people from surrounding areas, through Ng’onga CAG, where they agreed to build a school block at Ng’onga Primary School.

The report also points out positive developments in Ntcheu where the locals of Katsekera area managed to negotiate with Nyala Mines Company management to fund the construction of six teachers’ houses and two classroom blocks at Kandoma Primary School.

And again in a joint effort with communities surrounding the school, the company has upgraded some facilities at Katsekera Health Centre and carried out other important investor /community coordinated area development initiatives.

People are quickly realising that their areas can benefit much from mining investments through constructive dialogue with investors other than confrontational approach,

In his remarks during a Tonse Tipindule faith-based mining governance workshop held at NCA office premises in Lilongwe, QMAM’s Secretary General Osman Karim emphasized on the need for all stakeholders to approach mining issues with soberness and balanced views and avoid creating alienated atmosphere among   players, which might dearly cost the country in terms of development and economic aspiration.

We all want the mining industry to develop. I believe, as a country, we are short of options in terms of means to grow our economy and with mining having been identified as a key viable alternative to economic diversification, it is incumbent upon every good citizen to be positive and challenge the negativity that has been synonymous with mining,

He said the communities in mining areas should look at miners as friends not rivals to allow room for negotiations and agreements that will benefit both sides.

On his part, QMAM’s Executive Director Saiti Burhan Jambo noted some wholesome challenges that the people are facing due to mining activities in their areas but remained optimistic that Tonse Tipindule project’s non-confrontational interventions will be able to address such hurdles.

Jambo cited unfair employment practices, poor working condition, environmental and cultural issues, and livelihood disturbances, among others, as some of the mishaps that need mitigation.

QMAM is a member of a consortium of five faith-based organizations that are implementing the 15 months Tonse Tipindule Project, which started on November 1, 2015 under the coordination of the Norwegian Church Aid (NCA), and will wrap-up in January next year.

The other faith-based organizations implementing the project in different districts include NCA, Catholic Commission for Justice and Peace (CCJP), Evangelical Association of Malawi (EAM) and Church and Society of Livingstonia Synod.