Lithium (Li) is an element used in the production of glass, aluminum products, ceramics, lubricants, greases, rocket propellant and batteries. It is mined from ores associated with granitic rocks such as pegmatites and sub surface brines. The main viable sources of lithium in granitic rocks are petalite (LiAl(Si2O5)2and spodumene (LiAl(SiO3)2).

In Malawi potential areas for exploration include pegmatites of Mzimba, Balaka and Mwanza. Saline soils of Mzimba, Bwengu, Phalombe River delta and lower Shire Valley may be of interest too.

Recent enquiries about lithium sources have come in because of the demand in the element for high technology application and price. Recent prices for battery-grade lithium carbonate in China rose up through $10,000 per tonne. Prices are likely to continue rising, particularly as demand from the new battery megafactories kicks in response to demand for electronic equipment and high performing batteries. 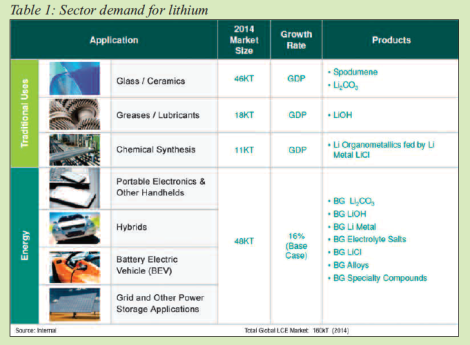 Lithium is a chemical element found in the minerals petalite, lepidolite and spodumene. Commercial quantities are found in pegmatites.

Lithium is also obtained from saltwater (or brine). As saltwater evaporates, dissolved solids are left behind. These solids include sodium chloride (NaCl), potassium chloride (KCl), and lithium chloride (LiCl).Subsurface brines trapped in the Earth’s crust are the major source material for lithium carbonate.

Geothermal lithium brine deposits can be explored in the vicinity of hot springs such as those found along Karonga – Chitipa road, Nkhota Kota, Liwonde, Mpyupyu and along Mwanza fault in Chikwawa. Geothermal lithium resources are comprised of a hot, concentrated saline solution that has circulated through crustal rocks in areas of extremely high heat flow and become enriched with elements such as lithium, boron and potassium.

Salt water sources are less expensive to mine than from rock such as spodumene, petalite, and other lithium-bearing minerals.

Salt water is first pumped into evaporative ponds where lithium concentration exceeds 6,000 ppm Li through solar evaporation. Lithium saltwater is pumped to a recovery plant and treated with soda ash, precipitating lithium carbonate, which is then filtrated, dried, and shipped.

Hard rock liberation of lithium involves mineralogical studies, grindability testing, gravity, heavy liquid and heavy media separation, Flotation and pyrometallury (concentrate roasting and acid  roasting. The rosting process may reach 1100˚C, crushed the product and then mixed it with sulphuric acid and heated to 250˚C. The product is extracted into water producing a lithium sulphate (Li2SO4) solution. Soda ash is then added to form lithium carbonate. The carbonate is then reacted with hydrochloric acid (HCl) to convert it to the chloride which can then be processed into lithium metal by electrolysis.

Possible areas for discovery of lithium in Malawi 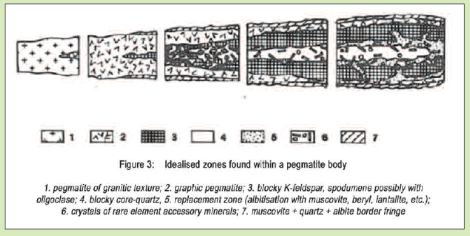 Cameroon in 1959, characterised pegmatites in terms of their mineralogical sequence from border towards the core:

The above sequence can be observed in Malawi pegmatites too.

Salt has been traditionally exploited around Nchalo in Chikwawa, Bwengu in Mzimba and Embangweni in Mzimba. Recent geophysical survey has added Phalombe River delta where there is a strong, 13km diameter, potassium response indicating a possible large deposit of salt.

Geothermal lithium brine deposits may not be a viable lithium source, around geothermal hot springs, looking at previous chemical analysis of geothermal springs. Li has been non traceable showing chemical composition of water that has not circulated much through crustal rocks.

Lithium demand has been boosted by rechargeable battery manufacturing, smartphone and tablet sales. Prices have risen to beyond USD10, 000 per tonne. The potential to discover commercial lithium sources exist but there is need to focus on geological prospectivity and pointers such as pegmatites and saline soils.

The piece “Technical File with Grain Malunga: Possible sources of lithium in Malawi” featured above was initially published in Malawi’s Mining & Trade Review Issue Number 42 that is circulating this October 2016.