Kainsha Energy Limited, a Zambian mining company registered in Lusaka in February 2012, has put in an application for an Exclusive Prospecting Licence for a block in Lake Malawi. Three blocks have already been allocated to Surestream Petroleum and SacOil by the Malawian government. Yet the quest for oil is associated with the still unresolved dispute between the governments of Malawi and Tanzania over ownership of the lake.

Kainsha sets out its vision as “building a successful exploration and production (E&P) company in Zambia and including Zimbabwe, Malawi and Botswana”. The company is a subsidiary of Swala Energy Limited that was registered in the British Virgin Islands in 2010 and is in the process of listing on the Australian Securities Exchange. Kainsha’s website indicates the company’s (and parent company’s) interest in Malawi’s potential in oil.

Kainsha Energy has a focus on oil and gas exploration in two main play systems – the Tertiary Rift Systems of the Great Lakes and the Rift systems of the Karroo – widespread over Southern Africa.

The primary oil focus is on the basins of Lake Tanganyika in Northern Zambia and Lake Nyasa/Malawi. These basins lie in the southern part of the extensive East African Rift System, which has seen significant oil discoveries being made to the north in Lake Albert in Uganda and which show similar promise in Zambia and Malawi.

Furthermore, Swala’s investor presentation for the Initial Public Offering (March 2013) highlights that applications for 2 blocks have been/are being submitted to Malawi. Swala has interest in hydrocarbons in other countries along the Rift Valley with current assets hel in Kenya and Tanzania.

Kainsha’s application to the Malawian government is confirmed by a screenshot in the Revenue Development Foundation’s video presentation of the yet-to-be-launched Malawian Government Integrated Repository (see image below). This repository will include data about licences and concessions in Malawi, taken from the Mining Cadastre Administration System and Oil Concessions Administration System. It is aimed to improve the central administration of natural resources and related revenue. For more information, view our recent article, “Malawi’s Mining Cadastre Administraton System to go online with assistance from the Revenue Development Foundation“.

Kainsha may have to wait for a while for the decision on its application for a prospecting licence because of the ongoing dispute between Malawi and Tanzania on the lake’s boundaries. In March, Foreign Affairs minister Ephraim Chiume noted that no further licences would be given to companies interested in prospecting for oil in the lake while the dispute remains unresolved. 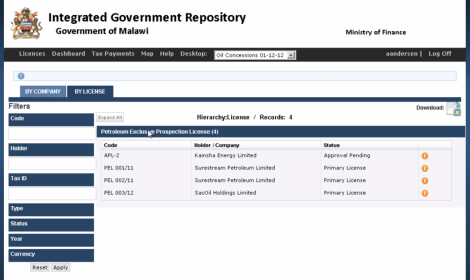