The Norwegian Church Aid (NCA) has stressed the need for increased engagement between stakeholders in the extractives sector including the government, investors, civil society groups and communities in resource rich areas to ensure that the impoverished communities are kept abreast of mining projects taking place in their areas.

NCA Malawi Country Director Havard Hovdhaugen explains in an exclusive interview with Mining & Trade   Review that studies conducted by his organisation have proved that in Malawi there is an information gap between stakeholders and communities in mining areas due to lack of dialogue and effective communication. 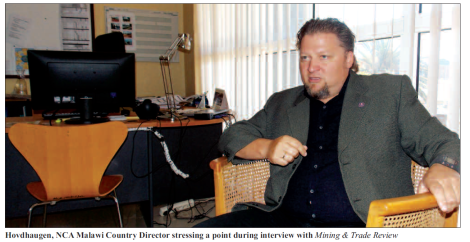 We are, therefore, implementing a resource governance programme to bridge this gap because for a mining project to benefit the rural communities, members of the community have to be sensitized and empowered to dialogue with the government and investors and demand a fair share of benefits from the project,

NCA has employed a strategy called Theatre for Development (TFD), which Hovdhaugen describes as an excellent tool to create space for dialogue between the affected communities and other stakeholders.

The organisation engages a local civil society grouping, Institute for Community Mobilisation (ICOM), to execute TFD in specific mining areas and has lately been to Malingunde Flake Graphite Project in Lilongwe, and Njereza Limestone Mining Project and Makanjira gold panning area in Mangochi.

Under the methodology, ICOM initially conducts research to establish root causes for various problems and also background information on the areas.

The action plans come from investors, community members and duty bearers on how they can solve critical problems affecting not only the community but also investors and government as they carry out their duties.

Then a theatrical performance follows, unveils the research findings and verifies them with the community.

The performance also facilitates development of action plans and resolution of issues between the community members, miners and duty bearers.

This strategy is effectively working here in Malawi where dialogue has been difficult because of poor  communication strategies. For example, in projects such as Malingunde, communities say they were better sensitized by our TFD programme as officials from  government and mining companies previously tasked with sensitizing communities used some technical language which they failed to understand,

He also advises the Malawi government to uphold good governance in the extractive industry saying if well managed, the sector is an effective tool to lift Malawians including impoverished rural communities out of poverty.

Hovdhaugen says, among other things, Malawi needs to update the outdated legal framework governing the minerals sector in a way that communities affected by mining are fairly compensated.

The law should also take care of environmental consequences, ensure that revenue created benefit Malawians including communities in mining areas and promote transparency and accountability,

He says the government also needs to enforce the new law noting that the main challenge for Malawi is not absence of good laws but rather enforcement and implementation.

Hovdhaugen promises to maintain a good working relationship between NCA as a civil society grouping, the government and mining investors saying Malawi will not develop its minerals sector if stakeholders embrace a confrontational approach in dealing with issues.

We would also like to urge the government and mining companies to invite communities for dialogue,

Following the success of TFD in facilitating dialogue between stakeholders for the Malingunde Graphite Project in Lilongwe, Cement Products’ Njereza limestone mine, and gold panning areas in Mangochi, NCA has planned to take TFD to other mining areas where there are similar problems of lack of dialogue and effective communication between stakeholders and affected communities.

He explains that the approach will help eliminate fear among the affected communities as was the case with Malingunde.

The fear created in Malingunde was not only related to the issue of relocation, it was also about the lack of information in general. If relocated, to where? If compensated, how much? If mining will take place what will happen to the communities’ sacred places, graveyards?

ASX-listed Sovereign Metals is conducting a feasibility study for the Malingunde flake graphite mining project which is expected to yield approximately 44,000 tonnes of graphite concentrate per annum over an initial mine life o 14 years.

The company is also conducting environmental and social impact studies which include consultations with local stakeholders on the way-forward for the project.

Sovereign aims to complete all studies for the project towards the end of 2018 to decide whether the mine will be developed or not in 2019.

If a decision will be made to proceed to mining stage, a resettlement exercise will be implemented. Sovereign has, therefore, advised the communities in the project area to live their normal life until the relocation decision is made.

At Njereza in Mangochi, Cement Products, which is a local firm mining limestone at the site, has launched a clinker plant while in Mangochi Makanjira, illegal miners are extracting gold in Unga and other rivers, an exercise that has led to environmental damage.

The Ministry of Natural Resources, Energy and Mining finalized consultations on the new Law a couple of years ago but despite repeated promises to expedite the enactment of the new  law, the government is yet to bring the Bill to parliament.

The Revised Mines and Minerals Law, among other things, provides for mining companies to sign community development agreements to enable communities in mining areas benefit from proceeds of mining projects.

Though it does not have a rich mining history, Malawi has operational mines for coal, gemstones including the most precious ruby and sapphire, limestone and quarry.

The Kayelekera Uranium Mine, which is so far the country’s largest mining investment, remains on care and maintenance due to prevailing low uranium prices on the world market but exploration by government and private companies has unveiled sizeable quantities of various minerals including rare earths, graphite, bauxite and heavy mineral sands.