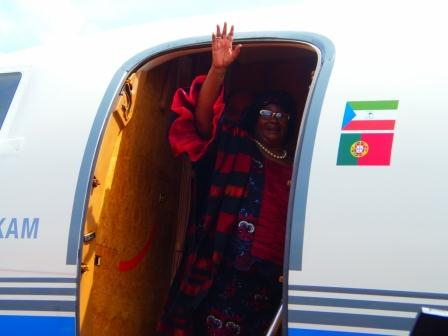 Under fire: Joyce Banda for her decision to attend the South America-Africa Summit yesterday in Equatorial Guinea despite the ongoing nationwide civil service strikes that were resolved last night (Credit: The Maravi Post)

Amid week-long nationwide strikes, Joyce Banda, Malawi’s president, left the country yesterday in a jet provided by the president of Equatorial Guinea. Banda is attending the 3rd Summit of the Forum on Africa and South America held in Malabo, Equatorial Guinea, to improve South-South cooperation. Mining is evidently on the agenda, along with energy, infrastructure, trade, investment, security, transportation, tourism, and science and technology.

Back home, an estimated 120,000 civil servants, including teachers, nurses and doctors, were on strike demanding wage increases. National airports were closed yesterday and the day before, leading to the cancellation of all international flights. Rumours suggest that the president was able to fly out of Malawi with the assistance of the defense force which took over operations at the airport while the usual staff were striking.

Trade Unions, led by the Civil Service Trade Union (CSTU), have been demanding a 65% increase in salaries necessitated, they argue, by the rapidly escalating living costs. However, according to Malawi’s Minister of Trade, Ken Lipenga, the country is unable to meet the demands

Currently our wage bill is 97 billion kwacha ($277 million), and if we agree to their demands, this will almost triple to 276 billion kwacha, which is equivalent to the whole national budget.

One opposition party, the Democratic Progressive Party, released a press statement that suggested the figure Lipenga quoted was a “deliberate miscalculation” and far higher than the demands of civil servant. It is not clear whether or not Lipenga included other demands (increased allowances) in the MWK 276 billion figure (approximately USD 788 million).

Other opposition parties also chimed in. Friday Jumbe, president of the New Labour Party, criticised Banda’s move to attend the summit during the “crisis”, and these sentiments were echoed by Ken Ndanga, spokesperson of the United Democratic Front. 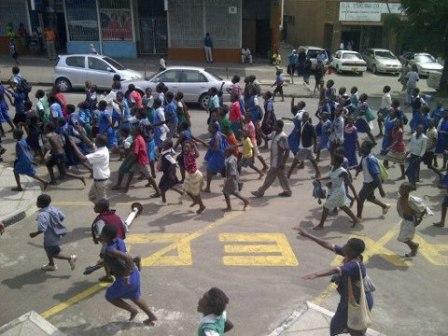 Primary school kids protest in Blantyre against President Joyce Banda as their teachers go on strike (Credit: The Maravi Post)

Outcries over the ill-timing of Banda’s trip were accompanied by images of protesting primary school children in downtown Blantyre, Malawi’s commercial capital. The children protesting against Joyce Banda, evidently angry about the ongoing teachers strike, were met by police dressed in full riot gear who blocked students from Sanjika Palace and stoning Joyce Banda Foundation School buildings. Tear gas is also reported to have been used to disperse school children in Lilongwe . One journalist tweeted:

President Joyce Banda flies out of the country as primary school kids in Blantyre take to the streets in protest. #Malawi

As the president was leaving the country yesterday afternoon from Chileka International Airport, Blantyre, she announced that she had put in place an agreement to increase the salary of civil servants. She said

Let me stress here that as I am leaving I have left some offer that whatever the case, civil servants should get salary increment. Looking at the way life is now, civil servants’ pay is supposed to be hiked by any means. I cannot say much, everybody knows what our country is going through.

Last night, the CSTU president, Elia Kamphinda Banda, the Teachers Union of Malawi general secretary, Dennis Kalekeni, and the Government Negotiating Team met in Lilongwe, the country’s capital, and agreed on a reviewed civil servants’ salary structure. The lowest paid civil servants will receive a 61 percent increment (basic salary increase from MWK 18,000 to MWK 29,000 (approximately, USD 50 increased to USD 80)) and the highest paid civil servants will receive a 5 percent increase to be paid in arrears from January 2013.  This is to be financed by massive budgetary allocation cuts to some ministries and government departments.

The agreement has brought an end to the strike. However, Henry Kachaje, the well-known economic commentator of Business Consult Africa, pointed out that the increase in salary is not likely to be effective in the face of increasing inflation

Government has to raise money to foot the bill: It may raise taxes to businesses, who also raise prices of food and other essentials including transport costs; this leads to a further depreciation of the Kwacha, then the landlords raise house rentals, at the end of the spiral…. the real buying power value gained from the salary hike may be some 10% – 20%!

The economic reforms instituted by Banda, who became president following the sudden death of Bingu wa Mutharika in April 2012, have been backed by the International Monetary Fund and donors. Commentators in Malawi note that while Banda may be hailed a golden girl by the donors and abroad, the situation on the ground is more painful. 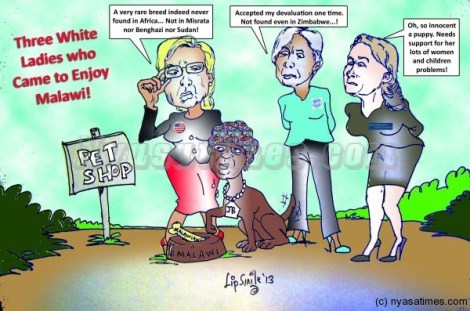 Joyce Banda continues to be hailed internationally, amid criticism in Malawi that she is kowtowing to the IMF and other donors’ demands which are leading to rising living costs.  (Credit: Lip Smile)

Banda’s has struck a mutually beneficial deal with the the civil servants; the civil servants are temporarily happy over the increase in salary and Banda must be happy that civil servants are returning to their jobs. We hope that any agreements made at the summit she is currently attending will be as mutually beneficial. The government has high hopes that the summit will reinvigorate the working relationship between South American countries and Malawi as well as other African countries represented.

We will be discussing any developments related to the mining sector.

Update 25 February 2013: No information was provided on discussions or any agreements made in the mining sector, however, Malawi has agreed on a “veggies export deal” to start exporting fresh and dry vegetables to Equatorial Guinea. Very little other information related to Malawi is available following the summit.