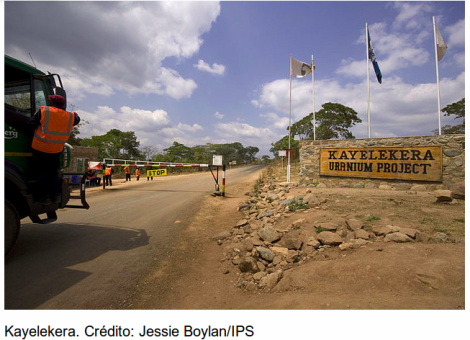 At the beginning of February, Wavisanga Silungwe, the chairperson of “Karonga Business Community”, announced that he had resumed plans to demonstrate against Paladin Africa Ltd., the operator of Malawi’s largest mine, Kayelekera Uranium Mine.

Silungwe is well known as he was one of the organisers of a demonstration planned for the 14 to 17 November 2012 over claims that Paladin has failed to honor its social development commitments. Led by Karonga Youth for Justice and Development (KYJD), the protest was called off at the last minute following meetings between senior Paladin staff, the Principal Secretary for the Ministry of Energy and Mining and KYJD. KYJD announced that they had been “misinformed and that claims were not a true reflection of what Paladin had agreed to carry out for the people of Karonga”.

Mr Silungwe repeatedly has made various unsubstantiated allegations against the Company, which Paladin has refuted. […]
Paladin has been informed that Mr Silungwe has been banned from speaking on behalf of other Karonga organisations in the future.

At the time, the Paramount Chief Kyungu did not back Silungwe as he felt Silungwe did not represent the people of Karonga.

It appears Silungwe cannot be silenced.

On the 3 February 2013, The Maravi Post reported that Silungwe made a statement calling on government to renegotiate the agreement with Paladin. Silungwe also praised the courage of Kamuzu Chibambo, leader of the People’s Transformation Party (PETRA), who handed government an ultimatum last month demanding explanation on why the deal cannot be renegotiated, and  MP Lifred Nawena, who raised allegations in parliament in November that Paladin had paid bribes to government officials. Silungwe also threatened demonstrations.

Paladin Africa’s General Manager of International Affairs, Greg Walker, did not believe Silungwe’s recent statement warranted comment because Walker claimed that Silungwe has been “disowned” by organisations he previously represented.

The press release is replicated below with no efforts to correct mistakes (e.g. we presume the reference made to a letter from the 26 January 2012 is in fact a letter written this year).

On 19 February 2013, Nyasa Times covered the story and interviewed Silungwe. This is what he had to say,

All what we want is to increase the level of local business opportunities at Kayelekera Uranium Mine in order to benefit more locals.

With this scenario [claims about the mine waste contaminating the Sere River] we are worried that we might be risking our lives by drinking water with uranium particles. We want to know how safe the water is for people’s health

We expect to be able provide updates on this story as it unfolds. Watch this space.

Please refer the letter dated 26th January 2012 in which, we demanded answers from Paladin on the below items…

1. Uranium is a strategist export commodity for Malawi. Much as proceeds money are private money for Paladin but its money for Malawi, its export from Malawi and we demand that Government must tell Paladin to opens an Account in Malawi and close the so called off-shore Account, that is un-economically not beneficial to Malawi.

2. Paladin claims it has used 5 Billion Kwacha for Development Projects in Karonga, we want to know these projects and how much each costs and Paladin must made public by displaying this information at the Karonga District Commissioner’s Office and let MEJN-Karonga Chapter scrutinize the reports and any future available Social Development Fund must be given to the Malawi Government through the Karonga District Commissioner’s Office, so that some Traditional Authorities in Karonga and Chitipa must equal benefit from the cake.

3. On Training and Human Resource Management according to the Development Agreement, Clause 12, page 24, Paladin has violated the statue and we want to find out what Ministry of Labour is going to do and has done about this. The recent retrenchments of several -able Malawians at the mine gives a wake-up call. Ex-Miners are stranded and gravely suffering in Karonga.

4. We want to know if Paladin did provide Insurance Bonds to our Government that will guarantee that enough money will be available to clear up and restore the mine-site and the affected land surrounding it. [The value of the bond must be based on costs estimated by International Environmental Conservation Agencies and not Paladin. If we don’t, the danger will be, when Kayelekera approaches the end of its profitability, the Directors can either vote themselves erroneous bonuses or declare the company bankrupt leaving the very expensive business of clean-up our land to our Government. The Government may say we have no money to do anything and this will mean the whole Northern Region will become an Environmental and Human Disaster Zone. ]

5. On Environment and our own lives, the Sere River drains into Rukuru which in turns flow into Lake Malawi and this is the Water people of Karonga and those that visit Karonga daily consume but we are not sure whether we are consuming clean – water- free from radiant and uranium particles.

But as we write this letter, no response has been given to us from Paladin, as such we declare 12th March -26th March, as a dates to camp at Sere River, 5 kms to Kayelekera Mine Gate at Kayelekera Village in Karonga. We intend to do these 3 things…

1. We shall not allow Paladin Workers/Vehicles/Coasters/Rainbow Trucks that carry Uranium, Trucks that’s carry Sulphur and any vehicle going to or from Kayelekera Mine.

2. Another team of demonstrators will camp at the Karonga Airport, preventing any Paladin visitor landing that day and afterwards.

3. We are finalizing the legality of peacefully asking all Vehicles belonging to Paladin that will move around Karonga Township on this day onwalds, to be packed at the Karonga Police Station.

The aim is if we can’t have answers before 12th March, then Paladin must leave Kayelekera, let Chinese Companies or any viable Company that can help Malawi take-over, before Paladin finish plundering our Uranium.

Not as poorly organized last November 14th when another group, Karonga Youth for Justice, without purpose and vision, having seen the money Paladin brought they failed into a trap, this time around our strategy has changed completely, we have learnt and changed meeting -preparatory strategies, and we are using the brave people of Karonga and Malawi. We will not announce those behind this broad move nationally. They will be known on the last date. Malawians shall never be taken for granted again; it’s our noble right to know. If we can’t then, why have Paladin in Malawi?

Approved by the Chairperson-Wavisanga Silungwe

4 responses on ““Why Have Paladin in Malawi?” asks the man behind plans for next month’s demonstration”