Rio Tinto, the Anglo-Australian mining company, made headlines in January when Chief Executive Tom Albanese stepped down over the write off of roughly USD 14 billion. USD 3 billion of the writedown was related to coal assets acquired only two years ago in Mozambique.

Rio Tinto acquired Australian-listed Riversdale Mining Ltd., a coking-coal operation in Tete, Mozambique, for approximately USD 4 billion. It has made a loss due to the difficulty of transporting the coal out of the country. In addition, the price of coking has dropped from USD 290 to USD 165 per tonne since the acquisition.

On acquisition, led by Rio Tinto’s Head of Strategy, Doug Ritchie, who has also resigned, the company planned to barge the coal along the Zambezi River. This proved unworkable as Mozambique’s government did not give approval for shipments and the company faced opposition over environmental concerns linked to dredging the river and use of vessels on the waters.

This week at Africa’s largest mining investment event, Investing in African Mining Indaba, Mozambique’s Minister of Mines, Esperança Bias, expressed her government’s commitment to continue working with Rio Tinto on finding a transportation solution based not on shipping but on rail.

If you look at Rio Tinto’s problems, they were not just in Mozambique. Mozambique was only part of the problem, and we believe we can find a solution.

I believe that today (infrastructure) is a constraint, but probably tomorrow it will not be. Many studies have been done on navigability of Zambezi river, and they advise it is not navigable. There are other alternatives that need to be explored, and the most efficient is rail.

It is our strategy that transport links for any product should allow free access for others. It makes no sense to dedicate a line for one product. It makes complete sense that companies cooperate to find a solution to export products.

Rio Tinto’s Head of Diamonds and Minerals, Alan Davies, also told the Indaba that the company was in talks with authorities in Mozambique over a new coal transportation plan.

Our priority now is to find a suitable infrastructure solution through discussions with the government so that we can move forward with the development of this asset.

In December, we blogged about the USD 1 billion investment by the Brazilian mining company, Vale SA, the world’s largest iron-ore producer, into Malawi’s railway infrastructure. The project is set to link Mozambique’s coal producing region Tete to the Nacala port by railway, which will cut across the south of Malawi. Malawi is expected to receive USD 8 million per year in concession fees.

Given the transportation crisis facing Rio Tinto, the company has been advised to work with Vale SA as the company is already investing in upgrading the rail connection and the connecting port. Bias, Mozambique’s mining minister, has emphasised the importance of companies cooperating.

Now that diplomatic relations between Malawi and Mozambique have been restored, following the disputed Shire-Zambezi Waterway launched by Malawi’s former late president Bingu wa Mutharika, cooperation between the two governments will prove advantageous for the mining sector and other industries involved in trade. 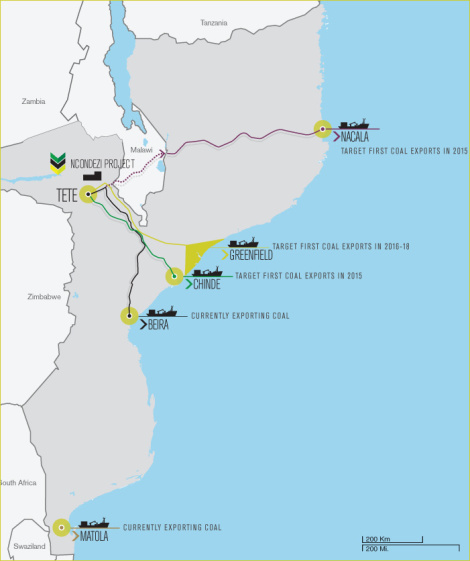 Rail Connection between Tete and Nacala