At this year’s national event, Malawi’s president, Joyce Banda, declared that the Anti-Corruption Bureau (ACB) will not spare any person, company or organisation from investigation if they are thought to be engaged in corrupt practices. Apparently, there is to “be no sacred cows; no protected species and no special ones” in the fight against corruption. 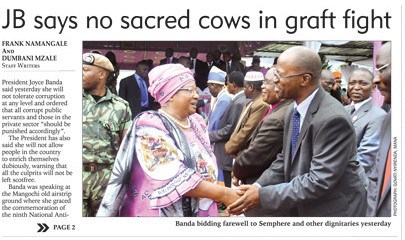 We blogged about the procedure and importance of making sure allegations of corruption are taken to the ACB.

In December 2012, in Malawi’s National Assembly, the Member of Parliament for Thyolo Thava, Lifred Nawena, claimed that a top government official’s child had received MWK 40m (approx. USD 121,500) from the managers of Paladin Africa Ltd., a few days earlier. Paladin responded to the accusations and said they were unfounded and that bribery is a breach of company policy. Nawena did not take this accusations to the ACB, even though this should be standard procedure.

In a turn of events, as we blogged on the 31 January 2013, Paladin approached the ACB instead of the MP over concerns about the allegations made by Nawena. Paladin Africa’s International Affairs General Manager, Greg Walker, commented on the matter

I requested the ACB to investigate the allegations made against Paladin by MP Lifred Nawena, who defamed Paladin and Company executives by claiming in the National Assembly to have evidence of wrong-doing by the Company, yet has not made a formal complaint against the Company nor presented his “evidence” to the ACB.

JB had this to say about the media’s role “in fighting corruption”,

The media has the power to reach out to all Malawians and inform them on the evils of corruption and how everyone should take part in the fight against corruption.

The role of the media is neither to frustrate government in its efforts to develop the nation nor to confuse the public, but to partner with Malawians in advancing anti-corruption drive for sustainable development of our nation.

While my Government values and supports media freedom, I wish to appeal to all media houses to act with maturity and responsibility as you reach out to the people. The media should be a force to build our nation, not to destroy it through publications or airing of malicious fabricated stories for personal benefit.

Government is pleased however, that most media houses are supporting our anti-corruption efforts as demonstrated by your presence today. I wish to commend you for your support to my Government.

There’s no freedom of info in #Malawi &no source protection clauses yet journos are made to believe they’re key in fighting corruption?

What is the role of the media in light of today’s commemoration of Anti-Corruption Day?