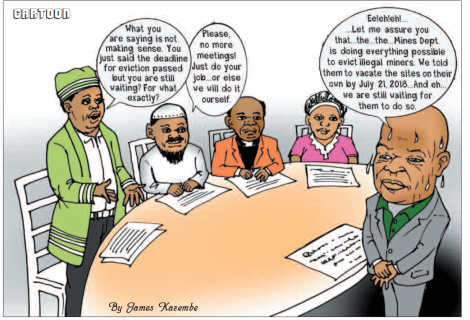 By Chiku Jere and Gloria Mbwana

Illegal gold mining activities by artisanal and small scale miners (ASMs) continue spreading to new areas unabated despite government’s repeated warnings to use the country’s law enforcement agencies to crack down on the miners and gold buyers camping at the sites, who include immigrants from countries such as Rwanda, Mozambique, Tanzania and Botswana.

Mining & Trade Review found out that in addition to Nanthenje River Banks in Traditional Authority (T/A) Mazengera’s area, in Lilongwe the miners have extended their activities to Lundu Village in T/A Chumutu’s area where unlike other areas, the ASMs are extracting the gold-rich soil from a hilly area to then ferry it using hired trucks and pails to the near-by Chamwavi River to wash out the gold strains which are sold to the dealers, who are mainly foreigners who smuggle the resource to neighbouring countries.

In an interview, the local miners said the activity has improved their livelihoods as they are now able to earn a better living as opposed to only depending on rain-fed agriculture.

We are illegal miners because government is failing to organize us to legalize this. We are in support of the idea to regulate the trade so that it is beneficial to the country,

said Julias Doyisi, a miner found at Lundu site who migrated from his original home Kamoto Village, T/A Chimaliro in Thyolo in search of gold.

He expressed concern that due to government’s failure to train the locals in the trade, most of the buyers of the stones are foreigners who are duping local miners by buying the commodity from them at very low prices.

I have been to almost all the areas where gold panning activities are taking place including Ntcheu-Senzani, Mwanza, Lisungwi, Mangochi-Makanjira, Salima and here at Lundu and the fact is that most of the buyers are foreigners because Malawians lack the technical and financial capacity. It is high time the government intervened in this issue because we are losing a lot of revenue as Malawians.

It is really baffling that our government that we entrusted to protect the interests of the citizenry, is fast asleep while these foreigners keep stealing the precious resources for mother Malawi. In countries where these people come from, foreigners cannot be allowed to roam freely in villages looking for gold,

said Doyisi who claimed to have been chased from Mozambique when he migrated to that country in search of gold as the law there has restrictions on the mining of reserved minerals.

He said what is more scaring for the local miners at the mining sites is the fact that most of the foreigners with whom the few local buyers are scrambling for the minerals come from countries where there have been bloody strife because of minerals.

A couple of months ago, the Ministry of Natural Resources, Energy and Mining repeatedly published a stop order for illegal gold mining activities taking place in the country in the local press threatening individuals engaged in the activities to stop the ‘malpractice’ or face eviction and prosecution according to the laws of Malawi.

But the small-scale miners, who are still continuing with the activities, reasoned that it is better for the government to start licensing and taxing their activities other than using force to stop the trade as that would imply depriving them of their source of income.

The government will act unfairly to us if it uses force to kick us out because we are benefiting from the trade. For instance, I am able to provide basic needs for my family using proceeds from these mining activities, and I even bought two motorcycles,

Charles Mzunga from Saenda Village T/A Makwangwala in Ntcheu, who was also found carrying out gold panning at the Lundu site, said as ASMs, they find it unfortunate that the government waits for them to discover mineral deposits when they, government technocrats, are the ones who have the equipment and technical know-how to conduct exploration and issue mining licences.

The so-called authorities from Mines Department wait for us to discover these mineral deposits on our own, then they move in to start to tell us what to do. I thought they are the ones who are supposed to identify the minerals and give us the local miners licenses to mine other than letting these foreigners steal the minerals in broad daylight

Another miner, Esau Ng’ona from Chivundura Village in the same area, hailed the gold mining activities for enabling impoverished miners to settle loans from village banks and buy fertilizer for their gardens.

Besides the gold diggers, the illegal mining sites have attracted vendors who have set up market centres at the sites selling various merchandise including food staffs, clothes and electronic devices.

A scanty head count by Mining & Trade Review at Lundu mining site revealed that there are over 5000 people doing various businesses from gold mining, buying, selling of merchandise, food and locally brewed alcohol.

There are also solar powered barbershops and phone battery charging make-shift parlors erected at the site, effectively turning the spot into a thriving economic activity hub where money is changing hands at a fast rate.

However, a myriad of social and environmental problems have surfaced at the illegal gold mining centres including fights due to jealousy among the miners and vendors, alcoholism, danger of diseases arising from poor sanitation and sexually transmitted infections.

We have ventured into this due to poverty but we are aware of the environmental, health and safety dangers. The water we are using is not safe, alcoholism is also another problem as beer is sold here and the drunkards sleep around with girls within the vicinity,

Meanwhile, more gold mining hotspots continue to be identified and while at Lundu Village, Mining & Trade Review got wind of reports that some miners were leaving for other sites in Dedza, Nkhoma, Namitete and Chimbalanga in Lilongwe.

In a related development, Cabinet has approved the Artisanal and Small Scale Mining (ASM) Policy, which aims at regulating the sub-sector.

Chief Mining Engineer in the Ministry, Cassius Chiwambo, told Mining & Trade Review that the new policy sets out the benefits that Malawians will get through formalization of the ASM activities.

He said, in so doing, the policy will create an environment where ASMs will be operating with great technical support from government officials through enforcement of applicable laws.

The policy will help the ASMs to get access to both local and international markets. As such, there will not be a window for illegal buyers who will be forced to move out of the country.

As a country, the policy will help Malawi generate revenue which will assist in addressing socio-economic needs of Malawians including those residing in areas where there are no mining activities of any kind.

However, during the Mangochi District Mining Indaba organized by Natural Resources Justice Network (NRJN) which brought together officials from Mines Department, chiefs, church leaders as well as community members, tempers flared when stakeholders told Director for Mines Department in the Ministry of Natural Resources, Energy and Mining Jalf Salima that they were dissatisfied with the way authorities were handling the issue of illegal mining.

Making a presentation, Salima told the gathering that his department took the concerns of the communities over the illegal mining happening in different areas including Namizimu Forest and Makanjira to relevant authorities which resulted in government issuing a stop order urging illegal miners to willingly vacate the sites by July 21, 2018 or face full force of the law.

As I speak, everything is in the hands of our security agents who will move in to carry out the eviction anytime as you know with issues to do security, you do not lay your plans bare but, surely, the miners will be evicted,

However, this did not go down well with members of the audience who questioned why government was still dillydallying in enforcing the order though the deadline already passed. 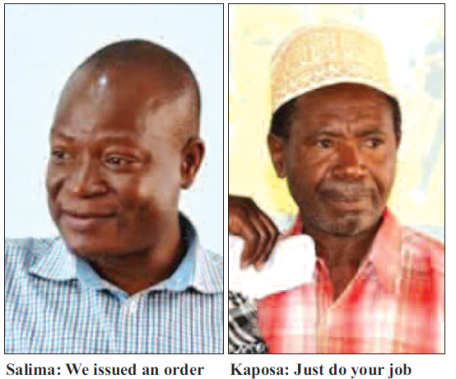 Shiekh Abdullah Kaposa took Salima to task saying time for consultation was over because the communities had given government an ultimatum to have the illegal miners evicted by July which has not been done.

We do not have time for your presentations or further meetings, all we want is to see the illegal miners out of our area. We are giving you two to three weeks to do your job or else we will mobilize communities and do it ourselves,

Kaposa’s sentiments got full backing from Traditional Authorities Makanjira as well as Chowe and other Group Village Heads whose areas are affected by the illegal mining activity.

On his part, NRJN Board Chairperson Kossam Munthali said what is happening across the country was lawlessness and injustice to communities as apart from losing out from the benefits they could have gained if the activity was legal, they also face many dangers that these chaotic mining activities are exposing them to.

As a country of laws we cannot continue paying a blind eye to such mishaps. Those entrusted with authority should do their job to safeguard the interests of Malawians,