Members of the Malingunde community in western Lilongwe are living in fear that they will be relocated from their ancestral land to pave way for mining activities following the reported discovery of a large graphite deposit in their area.

ASX-listed Sovereign Metals Limited is currently conducting a feasibility study for the Malingunde Graphite Project and projections are that mine construction at the site may commence next year with commissioning set for 2020.

Mining & Trade Review’s field visit to the prospecting area established that the project will require massive relocation of villages as the deposit has traversed the main road from Lilongwe City to Malingunde, homes and gardens in this fertile part of rural Lilongwe where communities depend on agriculture including the growing of the green gold, tobacco, which is Malawi’s major foreign exchange earner.

The 26 villages affected by the graphite prospecting project include those under Group Village Headmen Chitsulo and Pingeni in Traditional Authority (T/A) Masumbankhunda’s area.

As part of the feasibility study for the project, Sovereign Metals has engaged local and international consulting firms which are executing an Environmental and Social Impact Assessment (ESIA) study which has involved consulting various stakeholders including community representatives to sensitise them on the project.

But random interviews conducted by Mining & Trade Review revealed that communities, including chiefs, still require more sensitization as they are not yet convinced that the project will bring them tangible benefits as compensation for being relocated from their ancestral land, which they say, has for ages hosted and sustained their livelihoods through farming, fishing in Malingunde dams and livestock rearing.

Off course we are aware of the pending mining activity in this area but we do not want to relocate as that will mean losing all our property including our fertile land which do not require fertilizer to grow maize and our livestock grazing land. All these make a bedrock of our livelihood which we do not want disturbed,

said one villager found in his groundnuts field, Chiotcha Ntsinde.

The 55-year-old from Kokotani Village, Group Village Head (GVH) Chitsulo, flanked by his 46-year-old collegue, Tsogolani Kotala, said the whole prospect of having people who were born, raised, and know the area as their only home moved to a new unknown location is sending waves of fear, anxiety, and uncertainty.

The entire community is gripped with fear of relocating. We feel betrayed by our chiefs who are involved in this arrangement and above all, by government for their decision to relocate us,

Sharing the views were other villagers found working in their gardens, among them, 39-year-old farmer Eladi Wisiki, his 49-year-old wife, Anne Eladi, from Mbonekera Village and Adson Teniwaya from Ndumila Village, GVH Chitsulo.

Wisiki and his wife corroborated that the impending relocation will deprive them of their fertile land left by their forefathers, through which they have managed to raise and educate six children.

Taking this land from me is like killing me and my entire family,

His wife explained that they do not trust that the government will give them enough compensation when they relocate since the same government gave them peanuts as disturbance allowance during the company’s exploratory drilling programme.

Initially, we were given K4000 as disturbance allowance but in drilling their holes, they destroyed ridges and groundnuts crop that we had already planted. My husband could not stand that so he returned the money and told them to leave our land. This is when they increased the amount to K20,000,

Teniwaya, whose house yard and garden contain holes that were drilled as part of the exploration programme, also said he is not in support of the relocation.

We have everything here. We do not apply fertilizer to our gardens because the land is fertile, the environment is good for animal husbandry and we have dams with plenty of fish. What else can a man ask for? It is really sad to hear that all that will be taken away from us, 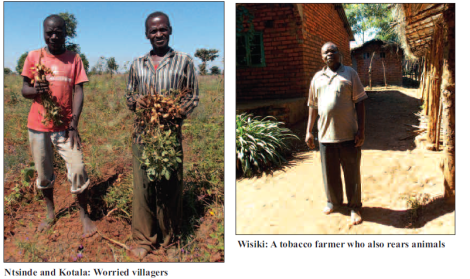 While denying accusations of being a sellout, GVH Chitsulo, whom the Mining & Trade Review crew coincidentally found at his court about to commence an in-house indaba with several of his village heads bemoaned that inadequate community sensitization on the project is breeding suspicion among his subjects who are made to believe that when chiefs go to attend consultation meetings on the project at Lilongwe District Council, they receive bribes from government officials to agree to all government plans.

It is really painful and heart-breaking to lose trust of your subjects, but it is not of our making. We are just called by the District Council through the T/A to such meetings,

The consensus among the chiefs who was that they did not want to relocate, only that they believe it will be difficult for them to resist government on the issue.

We know government is behind this predicament because they are the ones who gave a licence to the investor. So what we will strive for is justice and fairness, particularly on the issue of compensation,

Butting in was Village Head Kumalindi who said the resettlement package should match or even surpass the    productivity of the land they will leave behind so that those relocated should not look back later and regret.

We do not want our children, grandchildren or generations to come, to blame us for trading their productive ancestral land for nothing but some little money,

On his part, GVH Pingeni who heads 12 villages said   in as much as they know they cannot fight government and prevail, authorities should ensure that they make the resettlement as comfortable as possible to prevent inflicting more pain on the people who are being taken away from their land.

Among other amenities, the chiefs are demanding better homes, portable water, and school for their children; a health centre, and above all, land with fertile soil for farming, where ever they will be relocated to.

However, Sovereign Metals has moved to allay the fears raised by the communities.

In a recently released Environmental and Social Impact Assessment (ESIA) Comments and Responses Report (CRR) the company says a Resettlement Action Plan (RAP) will be compiled with due care of the Malawian legislation, international best practices and in consultation with all stakeholders, so that those that potentially have to be moved are satisfied with where they will be relocated to.

On the usually contentious compensation issue, the company assures that the RAP and associated compensation will be compiled according to the requirements of the country’s legislation and international best practice, which includes consultation with all resettlement-affected households and the relevant authorities.

The company further explains that relocation of the affected communities will only happen upon authorisation by the Environmental Affairs Department after an ESIA which will include rehabilitation and closure plan, as well as the issuing of a Mining Licence by the Department of Mines.

Sovereign Metals’ Country Manager for Malawi, Andries Kruger, says the company is on course to complete the ongoing feasibility study and ESIA for the project towards the end of this year, or early in 2019 and after this the company will seek a mining licence from government.

The works that people in the project area are currently seeing are part of exploration activities and specialist investigations to inform the ESIA,

An economic scoping study for the high-grade saprolite-hosted flake graphite deposit in Lilongwe plain was completed in mid-2017.

The results of the study demonstrates that the project has the potential to be developed as a low capital and operating cost operation, with an annual graphite concentration production of approximately 44,000 tonnes over an initial life- of-mine of 17 years.

But Palani urges that the project should be executed in a way that it is beneficial to both the mining company and the people of Malawi.

Malawi cannot afford to lose an investor; however, no development can be at the expense of the environment and the people,

Member of Parliament (MP) for the area, Peter Dimba, who professes his support for the project has since warned that if there will be injustices and unfairness in the handling of the issue, he will lead his people into blocking the continuance of the project.

Let me put it on record here, if we feel that people are being short-changed, I will personally lead a resistance that will block the project, and on that, I can categorically state that there won’t be any compromise,

The legislator who was speaking in an exclusive interview with Mining & Trade Review assured his constituents that all will be done to ensure that those who will be moved are adequately compensated to allow them start a new life wherever they will go.

He acknowledged that initially the company was hiding some information about the project because officials were afraid of the people’s reaction, something, he said, gave room to speculation.

People thought the chiefs were being bribed into towing the line of the investor and government with consultation meetings attendance allowances, so we advocated for the formation a Community Mining Committee to allow direct community participation in consultations to dispel this fear,

He also addressed the allegation that the chiefs were not being allowed to voice their views during consultation meetings by saying language barrier was the problem as the meetings were being held in English.

Dimba said during one of the consultative meetings, he proposed that consultations with stakeholders should happen at every stage of the project to ensure that people are kept abreast of the progress of the project.

This will help curb speculations that bleed unnecessary fears culminating into avoidable tension,