Nkhotakota District Council, traditional leaders and fishing communities have demanded periodical disclosure of progress reports of oil exploration activities taking place in the lakeshore district saying this will help them make an informed decision on whether to embrace the investment or not.

Mining & Trade Review learnt about this during random interviews the publication conducted in the district to assess communities’ awareness of the project.

The Ministry of Natural Resources, Energy and Mining granted oil exploration licences which were divided in six blocks across the country with block 1 which covers Chitipa and part of Karonga being awarded to South Africa’s Sacoil Holdings, blocks 2 and 3 stretching from parts of Karonga, Rumphi, Nkhata Bay and Nkhotakota to UAE firm Hamra Oil, Rakgas MB45 got blocks 4 and 5 while Pacific Oil Limited had block 6.

But interviews with members of the Nkhotakota community indicate that a large number of people is not aware of oil prospecting activities in the district portraying an over-all picture that there has not been adequate consultations and sensitisation of the communities about the project.

Our chat with Village Headman Chande whose subjects mainly comprise fishermen gave out the first indicator that more awareness and civic education need to be done on oil exploration in the district.

The chief feigned complete ignorance of the project saying no one has come forth to inform him about oil exploration in his area.

I am first hearing it from you. If you did not come I could not have known that there is oil exploration happening on the lake. But why are we kept in the dark?

Chande went ahead to question the wisdom behind keeping the information about the investment from the very same people who will be required to grant the passage for the investment’s activities.

I really do not understand. But what government should know is that people have now opened their eyes and they will demand answers,

Chande, who is a retired teacher, explained that on his part he can easily understand and embrace the project, but when it comes to his subjects, whose livelihood wholesomely depends on the lake, it will take some systematic sensitization to convince them because they are misled by civil society groups who use the radio to spread messages that oil drilling in the lake will kill fish.

This laissez-faire approach they have deployed in their awareness activities will not work. They should rather try serious engagement for the locals to embrace this important project,

The chief reiterated that, personally, he supports the investment, because he foresees it bringing development to his area and creating other opportunities such as employment and market for local businesses.

On the part of fishermen, oil exploration taking place in their side of the lake is nothing but a grapevine story heard on radios.

We just hear it on the radio but I have not seen anyone carrying out the oil exploration-related activities, neither has someone formally approached us fishermen to share information about the issue,

said Limbani Mdutu, a fisherman we found preparing his boat and net for the next fishing errand. 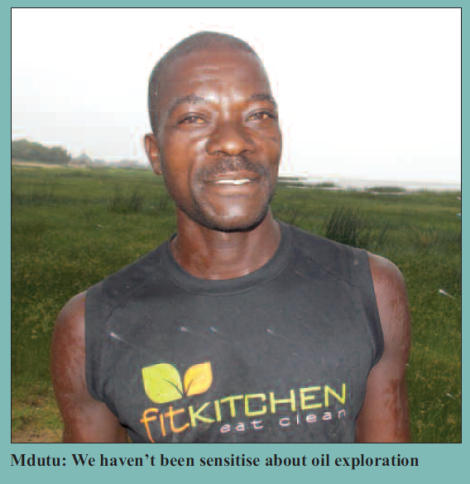 The 35-year-old old said the noise which they heard much was about the Kaunini (airborne geophysical survey), which was conducted by the government through the Mining Governance and Growth Support Project (MGGSP) with funding from the World Bank and European Union.

We saw a plane flying and the issue was all over the airwaves, both on radio and television. After that, we heard nothing and up to now we do not know what is happening and where the issue ended, but we could have loved to learn about the results of that survey. Why all this secrecy? Are they afraid of something?

Mdutu’s narrative was corroborated when he took the Mining & Trade Review crew to a home of one of his colleagues, where four fishermen were fixing their nets in readiness for the evening fishing escaped.

They all refused to be identified by names but the four agreed to the notion that there has not been community engagement on the issue, adding if there was any, even in their absence, they could have heard about it, because they live in a closely linked community, where news reach is fast.

Normally such important matters are delivered through village headmen or our vibrant Village Development Committee (VDC) and we make sure that every household is aware of what is happening amidst us,

said one of them.

He said all they hear are murmurings against the activity by some civil society on radio with their argument premised on the fear that oil drilling in the lake will kill fish, something which, he said, instills fear in them, as they are afraid of losing their only means of livelihood.

Another fisherman said they could have loved if government and oil investors had organised meetings to update community on the progress of the exploration works and assure them that nothing wrong would happen in the process of the oil search.

Doing so would have eased the fear and sense of insecurity that the people of this area are dealing with,

When contacted, Acting Director of Planning and Development (DPD) for Nkhotakota District Council, Derek Mwenda, acknowledged that community awareness has not been conducted and cited lack of funding as the reason.

However, he explained that the investor, Hamra Oil, brought in a consultant, a renowned but now retired human rights activist Undule Mwakasungula, who only sensitized members of the District Executive Committee (DEC) and full council comprising sector heads of government departments present in the district, council officials, members of parliament and councilors.

These are the only people who know about the issue. But we proposed and it was agreed that before engaging communities, the consultant should allow DEC and full council members to inform their respective communities so that they should not be taken unawares when the consultant visits them.

We have not done that yet because of, as I already alluded to, financial constraints that the council is facing, but our commitment still stands,

He said the issue was further tackled during a recent full council meeting where it was agreed that they should first sensitise Area Development Committee (ADC) members, who will, in turn, be able to use their frequent contact with village traditional leaders to pass on the message to the people.

Nonetheless, Mwenda said he was optimistic that the task will be done and people will be able to appreciate the multiply effect that the oil activities will have in their area, that will end up spurring development in the district and the nation as a whole.

In an earlier interview Chief Mining Engineer responsible for Oil and Gas, Cassius Chiwambo, made an assurance of government’s commitment to sensitizing communities in all areas where exploration is taking place.

He said government has already started, and they are lobbying for more resources to conduct more community sensitisation meetings. He also urged exploration companies to sensitise the communities before they begin geological mapping processes as part of their social licence obligation.

Chiwambo assured the communities not to be worried about fish dying during exploratory drilling as that does not happen often.

Last year, President Peter Mutharika assured Malawians that the Malawi Government will work with multinational oil firms in applying clean technologies to explore for oil in the country’s portion of the Great African Rift Valley which has potential for oil discoveries.

Mutharika said his government made a decision to go ahead with oil resources exploration because it does not want Malawi to stay behind as other countries in the region are doing the same. 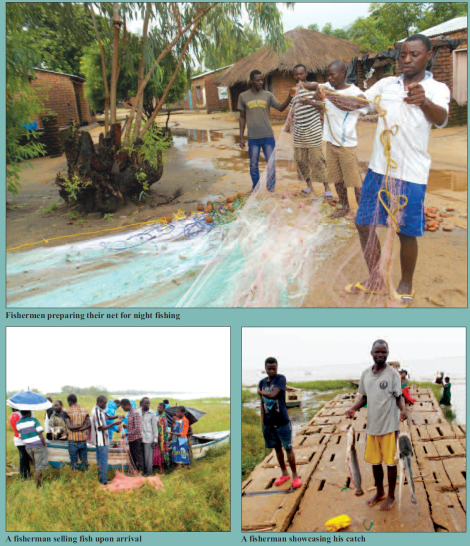