The Geology and Mineral Potential of Malawi

Malawi offers exploration and mining companies’ new hope of investment opportunities. The country has just undertaken airborne geophysical survey for the whole country and the data is being interpreted and ground follow up is underway to confirm the geology of Malawi and over 85 geophysical anomalies that have been detected.

A few mining companies have made progress in pursuing their mineral rights and are looking for financial and technical partnership to open up mines. The new Mines and Minerals Bill is awaiting enactment.

The geology of Malawi is part of Kibaran orogeny that was formed through continental collision that constructed Rodinia as known in Africa (Dirks et al, 2011). Malawi is mainly composed of Archean and Paleoproterozoic (Ubendian) terrain.  This terrain is dominated by what is known as Basement Complex rocks which were later overlain by Karoo sedentary rocks and intruded by basaltic/dolerite dykes and sills.

The Permo-Triassic period was later followed by Upper Jurassic – Lower Cretaceous period which saw the intrusion of syeno-granitic and nepheline syenite rocks that were later intruded by volcanic rocks infilled by carbonatite and alkaline dykes. The Southern part of Malawi is dominated by these rocks and have been grouped as Chilwa Alkaline Province. The same period saw sedimentary deposition characterized by Dinosaur Beds.

The above rocks have been overlain by Tertiary – Pleistocene rocks characterized by consolidated to semi consolidated beds grouped into Timbiri, Chiwondo, Chitimwe and Alluvial. Minor volcanic activities have been witnessed through existence of Songwe Volcanics.

The structural set up of Malawi is influenced by Lake Malawi rift structure. Main faults strike north – south while transform faults strike north – east. The southern part of the country, within the Chilwa Alkaline Province, radial faulting may be encountered due to volcanic activities related with intrusion of carbonatite rocks and other infracrustal ring structures. 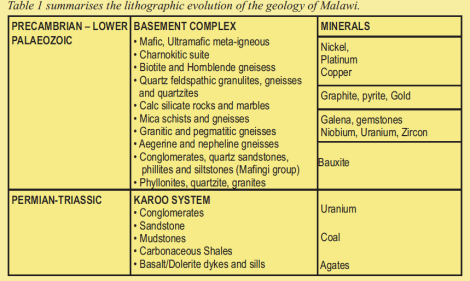 Malawi has several exploration companies looking for uranium, rare earths, niobium, graphite, rock phosphate, coal and titanium minerals (Table 2). All minerals except uranium are at pre-feasibility study.  Uranium mining was halted and the mine was put under care and maintenance.

Other companies are exploring for gold, titanium, dimension stone and limestone.

Paladin Africa Limited has uranium mining under care and maintenance due to low prices of uranium on the world market.

Mkango Resources have done detailed exploration for rare earths at Songwe in Phalombe District. They are looking for technical and financial partners to go into bankable Feasibility Studies.

Globe Metals and Mining are exploring for niobium and have credits of zircon and uranium at Mabulabo in Mzimba District. They are looking for serious technical and financial partners to go into mining.

Sovereign Metals have done detailed exploration for flake graphite in Lilongwe and surrounding districts. They have found world class deposits and are going into pre-feasibility study where they will undertake socio economic and technical studies in order to go into mining and processing of saprolite graphite.

Optichem (2000) Limited and Mota-Engil are jointly assessing Tundulu Phosphate on Nanthache Hill, Phalombe,  in order to mine and process phosphoric acid and rare earths.

Crown Minerals are exploring for heavy mineral sands (titanium) at Tengani in Nsanje. They are at pre-feasibility study level and are looking for technical and fincial partners to come up with a process flow sheet for separating rutile from ilmenite.

Several small companies are mining coal in northern Malawi. Kasikizi Coal Mine is mobilizing to mine coal at Vungu in Mwankenja coalfield. This is expected to be the main producer of coal in Malawi by end of 2018. The company intends to supply coal for the manufacturing industry and thermal power industry.

Recent Airborne Geophysical Survey popularly known as Kauniuni has given hope into improvement of the knowledge of the geology of Malawi and over 85 geological anomalies have been detected and are being pursued by a consortium of Geophysical Surveys of France and Finland. Most interesting are prospectivity for gold in Central Malawi and northern Malawi, rare earths in southern Malawi and niobium in south and central Malawi.

The fiscal regime associated with mining investment was enacted by Parliament in 2016 and provides a long term stability period to accommodate long term payback period associated with mining investment. The provisions in this fiscal regime will become effective once the new Mines and Minerals Bill is enacted by parliament. Issues of benefit sharing and community engaged have also been addressed.