The ongoing Geological Mapping and Mineral Assessment Project (GEMMAP), which is being funded by the French Government to the tune of 10.8-million Euros, is proving beneficial in unveiling the true mineral potential of the country.

This was revealed at a recent conference organized by GEMMAP in conjunction with the World Bank and European Union-funded Mining Governance and Growth Support Project (MGGSP) in Zomba where experts from Geological Survey of France (BRGM), Geological Survey of Finland (GTK) and Council for Geosciences South Africa (CGS) of South Africa, who are providing technical assistance to GEMMAP made their   presentations on the progress of the project.

GEMMAP is, among other things, interpreting data obtained from the countrywide airborne   geophysical survey dubbed Kauniuni which was financed by the World Bank and European Union through MGGSP.

The results are so far confirming Malawi’s potential for a number of minerals including rare earth elements, which are dubbed the vitamins of modern industry as they are very crucial in various modern high-tech applications including the production of magnets used in loudspeakers and computer hard drives, hybrid vehicles, rechargeable batteries and wind turbines.

Malawi has a number of prospects for rare earth elements mainly in the Chilwa Alkaline Province in the Southern Region and proven deposits include Songwe Hill in Phalombe, Kangankunde in Balaka and Lake Chilwa’s Chisi Island.

GEMMAP, which is providing on the job training for Malawian geologists, is also working on anomalies for high value minerals including gold, diamond and platinum group metals.

Malawi’s other significant mineral occurrences which are on the spotlight in the studies include uranium, coal, bauxite, copper, iron ore, gemstones, marble and graphite.

…We will now understand better the country’s geology-Salima

The Malawi Government has reported satisfactory progress in the 10.8-million Euros Geological Mapping and Mineral Assessment Project (GEMMAP), which is funded by the French Government.

GEMMAP and MGGSP, therefore, jointly held a conference at University of Malawi’s Chancellor College in Zomba last month to update stakeholders and the interested public on the progress of the project.

Director for Malawi’s Geological Survey Department (GSD) in the MNREM, Jalf Salima, told the gathering at the two-day conference that the project is coming up with satisfactory results, which will be vital in improving the    understanding of Malawi’s geology. 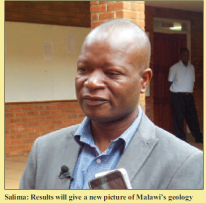 The results coming through GEMMAP and MGGSP, will give a new picture of Malawi’s geology and its history,

In the initial phase, lasting from September 2016 to February 2017, GEMMAP has compiled relevant geographical, satellite and geoscientific data from Malawi and surrounding countries.

The review and analysis of these data have been presented in the GEMMAP inception report. It includes the overview of the Malawian geology in relation with that of surrounding countries, mineral resources assessment of Malawi, geohazards catalogue, review of Artisanal and Small Scale Mining (ASSM) sector, production of provisional 1:1 million scale geological and structural maps, metadata of GSD Technical Reports, transfer of past geochemical surveys into GIS and georeferencing of historical 100k geological maps.

The GSD archive has more than 1,000 technical reports that concern all modules of the GEMMAP project including geology (detailed geological maps), mineral resources (exploration works including geochemical surveys), metallurgical tests, resource evaluation, geohazards and small-scale mining. Their analysis throughout GEMMAP are considered fundamental for the evaluation of the mineral potential of Malawi.

Furthermore, GEMMAP, in conjunction with MGGSP, will greatly improve the data storage and data access at GSD through (1) digitising analogue data which presently are available in hard copy format only (2) organisation/classification of these data (3) creation of metadata, (4) selected data treatment and analysis (historical geochemical and geophysical surveys, technical reports).

The geological mapping component of the project involves systematic mapping of the geology of Malawi, doing field observations including structural analysis, and collecting samples for petrographic, geochemical and geochronological studies, combined with the interpretation of high-resolution geophysical data and satellite multi-spectral data. The Deliverables include updated geological maps at scales of 1:1,000,000 (1 map); 1:250,000 (10 maps) and 1:100,000 (40 maps) and accompanying reports.

While MGGSP is working on fulfilling its objective to rise the contribution of the mining sector to gross domestic product (GDP) through a number of reforms such as updating of mining law, development of the cadastral licensing system and the acquisition of high-resolution airborne geophysics, GEMMAP has emerged as an important project in assessing the mineral potential of the country,

Assessment of the mineral resources concerns energy commodities (coal, uranium), industrial rocks and minerals, base and precious metals and gemstones. Work under this component involves re-investigation of already identified mineral prospects (around 160) through field surveys, sampling, petrographic and geochemical analyses.

The identification of new prospective areas will be performed by sampling and analysis of around 3,000 stream and soil samples in areas poorly covered by historical geochemical surveys. The surveys will take into account the interpretation of newly acquired high-resolution airborne geophysics data set which allowed identifying around 85 radiometric and magnetic anomalies.

The data of all mineral occurrences will be stored in a dedicated database containing the exact location, the mineral/commodity, shape/morphology of the ore body, description of the host rock, estimated size of the deposit, status in terms of past, present and future exploitation, and relevant information regarding mineralogy, ore grade and past production.

Said the Project’s team in a report:

A lot of information has to be extracted from existing reports and stored in a dedicated database.

Petrographical characterization, geochemical analysis and geochronological data will bring new information in terms of origin and typology of mineral occurrences.

We hope to produce a fresh/actualized view of the mineral potential of Malawi and to identify new prospective areas for future exploration/exploitation.

The results of the Geohazard component will assist the government to implement and manage the prevention policies of the country’s structural development plan. The final products comprise one synthetic map at 1:1,000,000 scale and 10 geohazard maps at 1:250,000 scale illustrating the areas that are prone to various types of geohazards encountered in Malawi (floods, landslides, earthquakes…). The accompanying reports will include detailed descriptions of the geohazards encountered on each map.

The ASSM sub-sector has a significant potential to contribute towards the rapid economic growth and development of the country through rural job creation and providing alternative economic activities.

However, there are several challenges that exist in the sub-sector and need to be addressed. These include limited access to modern technologies, capital for investment in mining and mineral value addition and established markets.

The artisanal and small-scale miners have inadequate marketing skills, their mining operations are informal, they are unable to understand geological information and usually disregard basic mining occupational health, safety (OHS) and environmental considerations.

The GEMMAP Project is intended to compile an inventory of ASSM in Malawi, to assess the methods used by ASSM operators together with possible environmental challenges and environmental issues at the mining sites, give recommendations for their improvement and provide training related to gemstone activities.

The GEMMAP 2018 programme started by implementing the analytical program for samples collected in 2017. This comprises, amongst others, selection of samples and laboratories, geochronological and geochemical analysis, quality control, data treatment and interpretation and thin section petrography. 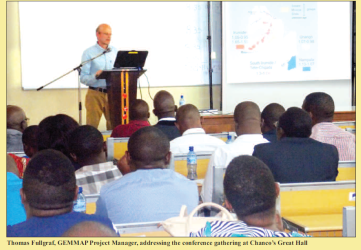 In the mineral resources component, the project will carry out the mineral assessment of northern and central Malawi. Geochemical surveys will be conducted in three areas, which will involve definition of sample areas and points, preparation and execution of one major field campaign lasting about 10 weeks during which about 1500 stream and soil samples will be collected and processed.

In the geohazards component, GEMMAP has planned in 2018 to conduct mapping of cenozoic sediments, field study visits of geohazards sites, development of geohazards catalogue and production of Seismo-tectonic map.

In the training component, GEMMAP, will organise training for officers at Geological Survey and Mines Departments on artisanal and small scale mining operations and prepare training manuals for artisanal miners.

The ASSM training programme for the government officials will involve sending one officer for specialised training in gemstone certification in Madagascar, 12 officers for lapidary training and four officers for ceramics to Tanzania.

Under GEMMAP, GSD geologists are also trained on-the-job by learning through observing and carrying out tasks assigned by the consortium geologists.

The organisation, financing and supervision of five Master’s study programs as well as collaboration with the Earth Science Department of Chancellor College is part of the academic training.

This training shall enable us continue geological mapping of Malawi after termination of GEMMAP,