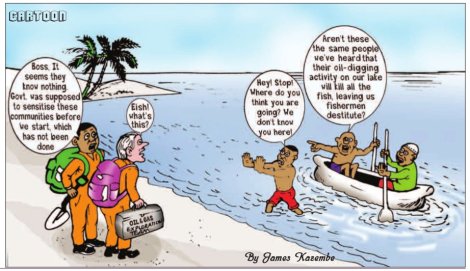 …they don’t know whether to rejoice or mourn

Fishermen as well as lakeshore communities have questioned the motive behind government’s behavior of keeping them in dark about oil exploration in Lake Malawi despite them being direct front liners who will face instant impact of the activity, being it negative or positive.

The feelings were expressed when Mining & Trade Review crew visited several spots along the shore of Lake Malawi to gauge the views of those who will experience firsthand impact of oil activities onshore and offshore.

But, in response, while acknowledging lack of sensitization to communities about oil exploration, both onshore and offshore, government says there has been only a delay due to some logistical and capacity issues, but plans are in place to do just that and the exercise will start soon.

Random interviews revealed that most of those whose survival depend on the lake know absolutely nothing as regards what is happening in relation to exploration for hydrocarbons in the stretch of the Great African Rift system of which Lake Malawi is part of.

Innocent Chavula is one fisherman who spoke to this publication on behalf of the absent Chairperson of Senga Bay Fishermen Association, a grouping of fishermen prying their trade in Salima District’s Senga Bay, Sendereya Village, Village Headman M’dala Mkwanda, T/A Maganga.

He said no one has come to them to explain about the issue of oil exploration.

We know nothing tangible; completely nothing worth taking any decision on with regards to such an activity. We are in dark on progress, impact, or whatever you may have on this issue. No one has approached us with that much needed explanation. We are the ones to be hit with first-hand effects of an activity of such nature but yet someone is choosing to ignore us,

Chavula flanked by several of his colleagues who were nodding in agreement to his assertions said absence of any information on the matter has led to anxiety among fishermen and their dependants.

All we get is grapevine talk that oil activities might destroy the lake and kill fish, eventually putting us out of business. On the other side, we hear that oil investment might end up boosting our business due to influx of people coming to work in the area. But we still do not know which is which because there has been no formal communication from government on the issue,

He explained that as fishing communities, they are in a dilemma implying they do not know whether to celebrate or be worried about the imminent exploration and drilling of oil in the lake.

We are not assured if our only means for survival will be protected, or what will be our stake in this oil business. We are gripped with fear. We do not know whether we will be winners or losers or if this project will bring us tears or smiles,

Chavula who hails from Village Headman Zindi T/A Kyungu, Karonga District but migrated to Salima for business reasons said fishing has been part of his life ever since he lost his job in 2002.

He invested his gratuity into a fishing boat and he has managed to feed, clothe and educate a family of nine children – three in college, two in secondary school; three in primary school – as well as aide his other dependants.

So you can imagine how helpful this business has been to me,

said the fisherman who has been in fishing for 15 years.

He also said fishing business employs hundreds of youths, saving them from idleness which could have pushed them into risky and immoral behavior.

There are over a 100 fishing boats, each referred to as ‘a company’, at Senga Bay’s Senderaya Village fish dock and a boat provides a life-line to between 20 to 24 people who operate in shifts, going into the lake to catch fish, meaning, over 3000 people who earn a reasonable K20,000 per fishing errand, eke out a living from that spot daily.

Salima District CouncilInformation Officer Watson Ralph Maingo said he is only aware of a meeting which took place between District Executive Committee, the full council (T/As, Members of Parliament and Councilors) and oil prospecting investors where they were informed about the hiring of a consultant to carry out sensitization exercise.

We were informed that once identified, the consultant will involve us, but that is yet to happen. You may wish to know that the council is not allocated resources to undertake such tasks,

However, Desk officer for oil and gas at the Ministry of Natural Resources, Energy and Mining, Cassius Chiwambo, gave an assurance that no serious work on oil exploration will start without sensitizing the people who will be directly impacted with the activity.

As government, we know that it is our obligation to sensitize the people, but the problem remains capacity issues in terms of trained personnel to carry out the job as well as financial resources,

To sort out the issue, he said government has made it mandatory for companies holding exploration licenses to pump in resources for community sensitization exercise and capacity building before commencement of any work.

We have told the companies that before they start any other activity on the ground, public sensitization must be done. During this exercise, officers representing government will be joining the fray and they will be the ones responding and explaining to communities; clarifying issues that members of the public may raise,

He said the process will be implemented as part of Environmental and Social Impact Assessment (ESIA) exercises to be undertaken by the companies as per legal requirements.

Block 1 located onshore in northern Chitipa and Karonga Districts belongs to South Africa’s SacOil Holdings, Block 2 and 3 tenements located offshore in the northern part of the lake are held by Hamra Oil, Blocks 4 and 5 stretching from Nkhotakota, Salima and Dedza offshore and onshore down South to Machinga, Blantyre and Mulanje are with Rak Gas MB45 Limited, while Block 6 located in the Lower Shire Districts of Chikwawa and Nsanje is for Pacific Oil Limited.

In his recent remarks at the National Water Day Conference in Mangochi on March 22 this year, President Peter Mutharika indicated that Malawi was open to the idea of going ahead with oil exploration activities as the country ‘needs to move forward’.

The Malawi leader went ahead and allayed fears of those who have been of the view that exploratory drilling for oil might cause environmental damage on the lake by assuring deployment of clean on-shore modern technologies to prevent pollution.

Experts are upbeat on hydrocarbon discoveries in the country’s stretch of the Great African Rift system which is proven to host oil and gas deposits in countries such as Mozambique and Uganda.