Today the Malawian Government launched the Mining Governance and Growth Support Project at the Bingu International Conference Centre in Lilongwe. According to Leonard Kalindekafe, Principal Secretary in the Ministry of Mining, the programme will support the government’s mining sector reform programme.

The project, approved in March 2011 and to be led by Remi Pelon, will be financed by the World Bank (credit of USD 25 million) and the European Union (USD 5.66 million). The French government is also working towards similar goals with EUR 11 million and technical expertise for geological mapping of the country. This was last done in the 1980s.

The aim of the project launched in Malawi today, under the title of “Mining Governance and Growth Support Project”, is to improve the efficiency, transparency and sustainability of management of the mining sector in Malawi.

At the launch, statements were made by private sector, government and development partner representatives, and the president of Malawi, Joyce Banda, was also in attendance to launch the project. An exhibition included stands and stones from companies in the extractive industry, banks, government and artisanal and small-scale miners associations.

Alex Lemon, the president of Mkango Resources Limited, was the first to give a presentation. He suggested that Malawi could become

The rare earth centre of Africa, if not the world.

He also explained that his company views the investment environment in Malawi as favourable in terms of the upcoming infrastructure projects, such as Vale’s investment into Malawi’s rail rehabilitation and improving the capacity of the energy sector. He also believes that the current regulative and legislative framework is good from the perspective of investors.

The French and European Union Ambassadors, Jacques Gascuel and Alexander Baum, as well as the World Bank’s Country Manager, Sandra Bloemenkamp, would all beg to differ. They mentioned the importance of improving legislation in the country to ensure Malawi prospers from its resources. Both Baum and Bloemenkamp indicated that Malawi should learn from the best practices of other countries; Baum said that

As a late comer, the country has the chance to learn from other countries.

John Bande, the Minister of Mining, called on all people in Malawi to create a conducive environment for investors in order to ensure that the sector can contribute to economic development. He possibly issued this word of encouragement following the last two weeks of calls for the government to renegotiate contracts with Paladin, a company that has 85% stake in Malawi’s largest mine, Kayelekera Uranium Project. Greg Walker, Paladin Africa Ltd.’s General Manager of International Affairs, who was in attendance, probably hopes these words do not fall on deaf ears. Other familiar faces from Malawi’s mining sector including representatives from Mkango Resources, Globe Metals & Mining and Mota-Engil are also likely to welcome Bande’s words.

Finally, Joyce Banda took the floor (see embedded video below) and declared the launch of the project with a heavy focus on the importance of supporting artisanal and small-scale miners. She also indicated that she would not be deterred from permitting the exploration and extraction of the abundance of rare earth elements that has been found in the Lake Chilwa Basin,which is a protected site under the Ramsar Convention on Wetlands of International Importance. Before concluding with a list of companies already involved in extracting metals and minerals in Malawi, she hailed Paladin’s contribution to Malawi’s economy and expressed that

I am praying so hard that the prices [of uranium] will go up as it is the first mining project so we need it to succeed.

Although Malawi is relatively new to its portfolio, the World Bank Group has supported the oil, gas and mineral sectors for many years in Africa, Asia and South America for “poverty alleviation and economic growth through the promotion of good governance and sustainable development”. However, concerns have been raised about the Bank’s involvement in the extractive industries, especially by environmental and human rights organisations. Consequently, in 2000, the World Bank President at the time, James Wolfensohn, announced that its activities would be comprehensively reviewed in an independent evaluation led by Emil Salim, a former Indonesian government minister who was also involved in organising the World Summit on Sustainable Development in 2002.

The results of the evaluation, including many strong criticisms, were published in the Extractive Industries Review (EIR) in 2003. This contained a series of recommendations, and importantly it noted that the World Bank Group should not support extractive industries investment in countries where pro-poor governance is inadequate.The report alarmingly indicated that

project funding in the extractive industries has not had poverty reduction as its main goal or outcome. […] the World Bank Group does not appear to be set up to effectively facilitate and promote poverty alleviation through sustainable development in extractive industries in the countries it assists.

Despite these dramatic findings, the World Bank responded with modest reforms and continued to increase operations in the sector. Hopefully, these reforms have been significant enough to ensure that the project Banda launched today will go someway in guaranteeing Malawi’s mineral wealth is enjoyed by Malawians. Watch this space. 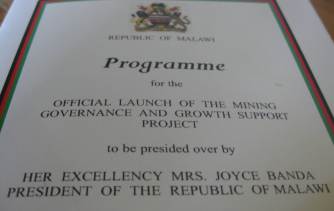 Update 29 January 2013: The World Bank has unveiled its Country Assistance Strategy for Malawi to help the nation diversify the economy and make it more competitive and resilient to shocks. The USD 695 million will complement Malawi’s Growth and Development Strategy II and Economic Recovery Plan for the financial years 2013 to 2017.