The Lower Shire Area is endowed with mineral resources associated with sedimentary deposition and remobilisation of ultrabasic intrusions. Main minerals of interest are nickel-copper-chrome, gold, uranium and; oil and gas. Corundum is hosted in biotite nepheline syenites while agateis hosted in Karroo basalts.

The Lower Shire Area consists of Shire-Zambezi Karroo outcrops in west of the Shire River and charnokitic granulite gneiss along the Thyolo Escarpment. The Shire River valley is underlain by recent stretches of alluvium and colluvium. These sediments may be lying under Karroo formations which lie on Precambrian basement rocks. The Rifting System triggered volcanic activities that brought about intrusion of basaltic lavas which were later followed by dolerite sills and dykes. Hydrothermal activity led to intrusion of siliceous and calcareous vein rocks along faults and joints.

This paper is a compendium of mineral resources of the Lower Shire Valley. It aims to bring new interest in mineral resource exploration in light of recent airborne geophysical survey.

Salt has been traditionally been extracted around Nchalo and Nkhatein Chikwawa. The saline brine is scooped on the surface of the soil and dissolved in water before filtration and evaporation through low heating or sun evaporation. This industry can be a candidate for poverty alleviation through technology support.

The water from which salt is extracted is rich in Na-Cl, HCO3-Cl and Ca-HCO3 with electrical conductivities of up to 17500 minihos/cm. The source of the water is believed to be from cretaceous Lupata sediments because surface water contains 15 -27 ppm Na while ground water contains 120 -3035 ppm.

The Tengani area between Chiromo and Nsanje host titanium and iron in form of heavy mineral sands and lenticular bodies of ilemenite, magnetite and rutile in quartzite ore bodies. Significant deposits have been observed at Naminjale, Chiradzulu and Nkhande. The streams around these areas contain garnet, rutile, zircon and ilmenite sand.

Recent work (Crown Minerals, 2006) has shown that the alluvial and eluvial deposits with a grade of 4.4% ilmenite, 0.83% rutile and 0.2% zircon exceeds 180.0 million tonnes. The Tengani area is estimated to have over 800.0 million tonnes of heavy mineral sands.

Marble is metamorphosed limestone. The same word is commercially used for sedimentary and other rocks that can be polished as ornamental stone. Common inclusions are graphite and diopside.  Malawi has several significant metamorphic limestones within the basement complex.

Numerous marble bands exist in the area near Makoko village. There are two main ridges called Namikunda and Nyamitambo from which quarrying is possible. The marbles have CaO varying from 31.86 to 50.4 while MgO varies from 0-21.7. Nyamitambo ridge is composed of 48.9 % CaO and 0 % MgO while Namikunda Hill has 50 % CaO and 0 % MgO.

Vein calcite occurs up to 6 meters thick in the vicinity of Panga Fault (Habgood, 1963). This is pure and can support a reasonable lime industry.

Davidite seems to be a source of U3O8 (uranium) and some rare earths (Yt, Ce and La) in quartz-feldspathic granulite along north of Mwanza fault west of Tomali. Further work was recommended by Habgood, 1963, to establish economic importance of this mineralization. 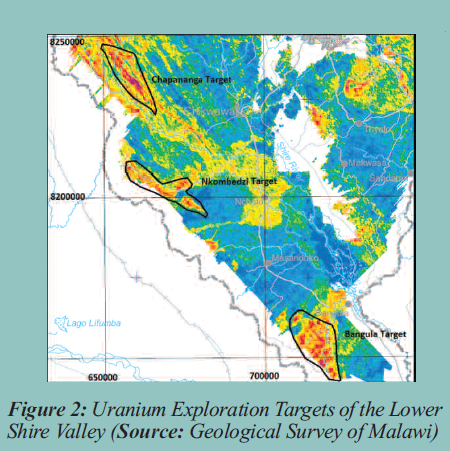 This association of minerals has been observed on Ngala Hill near Mapelera. The mineralization is in Metapyroxenite, pyroxene amphibolite and horniblendite. A number of trenches dug by Placer Dome in 2000 showed encouraging results potraying 12 m @ 3 g/t PGE+Au and 70 m @ 1.12 g/t. The average trench depth was between 1.5 m and 2 m and sampled material consisted of saprolite.Some copper mineralisation is associated with malachite coating along cleavages and interstitial sites.

A significant copper mineralisation is present on Namikunda Hill at Makoko in Nsanje. This  is believed to be stratabound and shows scondaru copper carbonates (malachite and azurite) on the surface.  The primary copper is associated with pyrrhotite.

The Karroo extrusive rocks (basalts) are exposed South of Ngabu, west of Sorjin and West of Bangula extending to the Mozambique border.  These volcanic rocks cover an area of about 1000 square kilometers.  The basalts are host to gem quality chalcedony including blue agate, chrysoprase (green), variegated agate, and carnelian (pink-red).  The chalcedony was formed from aqueous solutions by infilling of the cavities (amygdales) which formed in the upper parts of the basalt lava pile.

Green garnet and gem spinel have been found in the Makoko marble. Beryl (aquamarine) and corundum been found north of Wanga-wanga hill ad Malawe Mountain between Chididi and Lulwe missions (Bloomfield, 1958).

Corundum is found around Makoko village in nepheline syenite and plumasite veins. This occurs in colluivial deposits as well as pegmatites.

Previous studies have shown that these deposits have an average ash content of 51%, Sulphur content of 0.6% and a calorific value of 14.5% MJ/Kg.  further work does not rules out low ash coal especially at coal seams that could be found at depth as these coal fields are linked with Moatize coal field in Mozambique.

Interpretation and processing of aeromagnetic data by Paterson, Grant and Watson Limited identified targets that exhibit kimberlitic signatures. These areas give potential for diamond discovery.

The Mwanza Ultra basic intrusive is located to the southeast of Chikwewo along Mwanza River.  Modelling results reveal a shallow depth of burial estimated at 100 metres.  Another intrusive is buried about 320 metres to the south of Mthumba fault.

Previous geochemical exploration of stream sediments as well as recent geophysical surveys have revealed several exploration targets. These targets are usually underlain either by schists and granulites or marbles and calc-silicate granulites. The main sources of gold in these areas seem to be quartz veins and sulphide bands.

Recent airborne geophysical survey has revealed areas with thick sediments greater than 2.0 kilometres around Nchalo, Chapananga, to the west of Mwanza Fault and Makhanga to the west of Thyolo Escarpment Fault.  These depth are favourable for  formation of oil and gas. Exploration drilling is highly recommended. 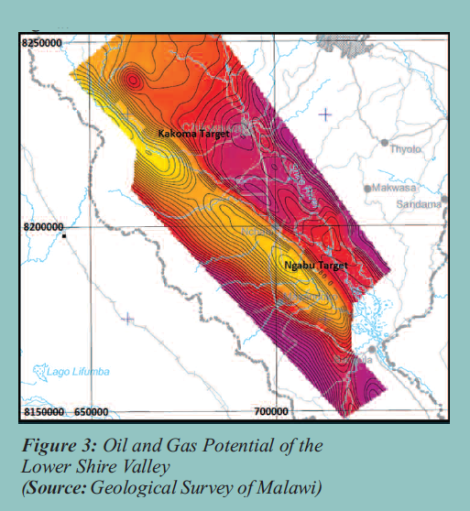 The Lower Shire Valley area offers for mineral resource development. It has fairly good infrastructure that can easily support access to Beira Port especially if the rail line can be rehabilitated to connect with the Tete line. Nsanje Port offers opportunity for an in-land dry port that can also support export of agriculture products such as sugar, rice, cotton and meat.