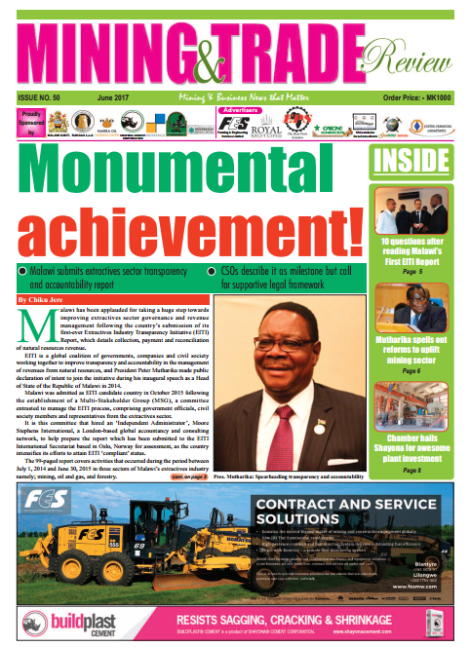 …CSOs describe it as milestone but call for supportive legal framework

Malawi has been applauded for taking a huge step towards improving extractives sector governance and revenue management following the country’s submission of its first-ever Extractives Industry Transparency Initiative (EITI) Report, which details collection, payment and reconciliation of natural resources revenue.

EITI is a global coalition of governments, companies and civil society working together to improve transparency and accountability in the management of revenues from natural resources, and President Peter Mutharika made public declaration of intent to join the initiative during his inaugural speech as a Head of State of the Republic of Malawi in 2014.

Malawi was admitted as EITI candidate country in October 2015 following the establishment of a Multi-Stakeholder Group (MSG), a committee entrusted to manage the EITI process, comprising government officials, civil society members and representatives from the extractives sector.

It is this committee that hired an ‘Independent Administrator’, Moore Stephens International, a London-based global accountancy and consulting network, to help prepare the report which has been submitted to the EITI International Secretariat based in Oslo, Norway for assessment, as the country    intensifies its efforts to attain EITI ‘compliant’ status.

The 99-paged report covers activities that occurred during the period between July 1, 2014 and June 30, 2015 in three sectors of Malawi’s extractives industry namely; mining, oil and gas, and forestry.

The aim of this EITI report is to strengthen the understanding of the level of contributions of the extractive sector to the economic and social development of Malawi in order to improve transparency and good governance in all components of the extractive industry value chain.

EITI principles are based on the belief that prudent use of natural resources contributes to economic growth, sustainable development and reduction of poverty in resource-rich countries.

The development, according to Natural Resource Justice Network (NRJN), an umbrella grouping of the country’s civil society organisations advocating for natural resources good governance, is a very positive step for the country.

NRJN Board Chair Kossam Munthali, who also sits on the MSG, said EITI is grounded on the principles of ‘Transparency and Accountability’ which are tenets of good governance, hence  adherence to EITI principles will help rid the secrecy the extractive sector has been synonymous with.

With EITI, the secrecy which breeds corruption and mismanagement in the Extractives Industries will have little space,

He explained that as a country moving forward, Malawi is on the right track because through such reports, communities will have access to information that will empower them to question how revenues from the minerals extracted in their respective areas are being utilised.

Munthali noted that another facet of the report ‘disclosure of contractual agreements’ will help tame community expectations on mining activities in their vicinity.

This will enable communities, who are Rights Holders, to be able to make informed choices and hold their duty bearers to account for decisions being made,

Munthali expects that with hard core advocacy and backed by the newly enacted Access to Information (ATI) law, the information in the report will be demand driven.

Submission of the report is not the end but just a means of pulling us together to start advocating for the implementation of the recommendations based on the findings of the report,

Munthali, nonetheless, said NRJN’s major caution is that for EITI to work and benefit Malawians there is dire need for political transformation and to expedite the amendment of the Mines and Minerals Act (MMA) 1981 with aspirations of Malawians factored in.

The amendment of the MMA remains key because we need a supportive legal framework in place if EITI is to work and benefit Malawians,

The EITI report highlights discrepancies and shortfalls in the current governance system for the extractives sector and has identified oversights on revenue management. But more importantly, it provides recommendations on measures that should be implemented in order to improve the situation.

For instance, the report doubts reliability of the data reports from the companies and recommends an assessment to ascertain credibility of the payments and revenues through independent auditing that applies international standards.

It urges authority to ensure that instructions for next year’s EITI reporting emphasizes on the importance of reporting entities complying with international auditing standards process as failure to do so will be viewed as lack of transparency.

Inaccuracies with regards to disclosure of minerals’production data for the fiscal year covered, including total production volumes and the value of production by commodity, were also noted.

The report recommends that in order to maintain accurate and comprehensive records of production, the Department of Mines (DoM) must produce reliable data for the EITI process.

The document explains that this is important because it will help in assessing and monitoring companies’ liabilities in terms of royalties on production, their revenue payments, as well as the development of the extractive activities in the country as a whole.

The report also advises that the DoM develops procedures to ensure the completeness of the minerals’ production data reported by companies and implements a computerised system to monitor, and update the data on a monthly basis.

This would improve the department’s ability to reconcile royalties and other non-tax payments with production data and investigate any discrepancies,

Weaknesses in revenue administration including non-collection of payments particularly non-tax payments such as royalties and ground rents are also highlighted in the report, which suggests the need for the DoM to make systematic follow-ups of all amounts due from companies to ensure that all fees are collected on a timely basis.

The overall cut-across advice from the report is that the DoM should improve its tax administration and collection capacity to effectively discharge its duties and maximise tax collection.

According to the report , total revenue from the extractive industries within the reported period was MWK 5,935 million (USD 13.6 million) with 49% from forestry, 40% from solid minerals, and 11% from oil and gas, translating to 0.9% of GDP, 1.1% of government revenues, and 0.6% of exports.