Paladin Africa, a subsidiary of ASX and TSX-listed Paladin Energy, says it expects the reserves at its Kayelekera Mine in Karonga to sustain operations for six more years when extractive operations resume at the mine, which is currently on care and maintenance.

The Mine’s General Manager, Alec Sharland, assured a delegation from the Malawi Chamber of Mines that toured the facility that the company is ready to open the mine when the price of  the yellow cake on the world market improves to profitable levels.

Let me stress here, we have only mined 40% of the deposit. The mine is currently on care and maintenance following uranium price slump on the world market. Once the price reaches levels that make business sense, it will only take six months to resume full capacity production and we expect six more years of mine life,

Production at Kayelekera was suspended in 2014 as a result of the crash in uranium prices caused by the Fukushima nuclear disaster in Japan, coupled with high operating costs related to energy, staff and transportation.

While on care and maintenance, the mine operates using energy from diesel generators at a daily consumption of 5000 litres while 60,000 litres are required during mine’s normal operation.

He said such is the status quo because the mine has been unable to connect to Malawi’s national electricity grid due to the country’s power generation challenges.

Sharland said unlike Kayelekera, the due listed resources multinational has maintained operations at its other African mine, Langer Heinrich in Namibia, where operation costs are lower because the mine has been able to source power from that country’s national grid.

We spend far less in Namibia compared to Malawi that is why we are still operational there. If we can only manage to lower energy and transport costs and experience an upward trend in uranium prices on the market then we can resume production here,

After production, the Kayelekera yellow cake is transported to Walvis Bay port in Namibia, the only port in Africa certified to handle radioactive materials. This also results in higher transportation costs as it could have been cheaper if the nearby Nacala Port in Mozambique was used.

Despite all the economic problems, Sharland said the company continues to pump in an annual capital investment of US$10million for care and maintenance.

He said apart from contributing to the country’ s economy through buying of diesel and cars, the company also supports more than 30 indigenous contractors, who supply goods and services to the mine and its workers.

Paladin has also maintained 165 employees, among them, experts in different fields whose livelihoods and that of their families and relatives depend on the mine.

Encouraging news is that the uranium price seems to have taken a positive turn on the markets, away from US$18 per pound which forced Kayelekera production suspension to between US$20-26 since October 2016, to $23.25 todate.

The Kayelekera mine was opened in 2009 and the average uranium spot price for three preceding years was at $70 per pound. This saw the mine contributing 2.6% to Gross Domestic Product (GDP) five years down the line in 2013.

Head of the visiting team and President of Malawi Chamber of Mines and Energy, Dean Lungu, said the tour of Kayelekera, which is so far the biggest mining investment in Malawi, has assisted the Chamber to appreciate challenges mining investors are facing in order to devise ways of improving the operating environment for firms in mining and energy sectors.

This visit has helped us to get first hand information with regards to challenges you are facing as an investor and overall progress and success of the investment. The facts obtained will go a long way in assisting the Chamber to come up with interventions to address the challenges,

Paladin Energy acquired exploration rights for Kayelekera in 1998 although initial exploration at the site commenced as early as 1982 by the Central Electricity   Generating Board of Great Britain.

Between 2010 and 2014, the mine produced 10.9 million pounds of uranium oxide, which represents 40 percent of the tapped deposit and conservative estimate suggests 60 percent proved.

Paladin Energy has spent $15 million on exploration to date which includes the initial acquisition of data from previous exploration.

The company’s Technical Report for 2009 projected a development costs outlay of $254 million.

An assumed further $195 million was expended on development capital, including a sulphuric acid plant for processing, in 2011 and 2012.

To date, Paladin Africa is said to have lost $387million because of the uranium price slump and high operating costs related to energy access.

In his speech, Sharland also bemoaned the tendency of some individuals including, chiefs and civil society leaders who have deliberately chosen to twist facts about the Kayelekera Uranium Project operations just to achieve self-serving motives.

This is not good for a country that needs investment so badly. As investors, we are here to partner government and contribute towards the country’s economic growth,

Sharland said due to misrepresentation of facts, fired-up officials from government agencies, such as the Malawi Revenue Authority (MRA) and other departments, have ended up storming the mine unannounced, expecting to stumble on something sinister, only to discover the opposite.

They have come here without notice, we have allowed them to inspect our operations, and they have gone back with a different perception contrary to what they were made to believe,

Sharland, therefore, challenged anyone to visit the mine at one’s chosen time to appreciate the ‘remarkable efforts’ his local team is putting into the project to make it a success.

He then urged change of attitude by local stakeholders towards foreign investors if Malawi is to attract more meaningful investments in the extractives sector. 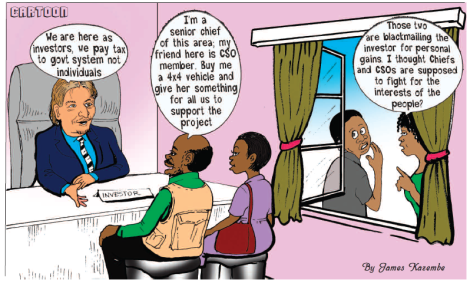 As an entity, Paladin values its internationally recognised reputation attained through a strong record of strict adherence to global standards of operation and the law of their investments’ host countries.

From protecting the environment, corporate social responsibility, employee welfare to safety issues, we do not compromise on standards.

Kayelekera mine’s achievement of five star-rating on safety through an assessment by an independent South Africa-based consultant testifies.

This piece was initially published in Malawi’s Mining & Trade Review Issue Number 49 (May 2017).