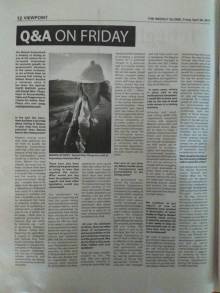 A couple of weeks ago David Makasu interviewed me for the Weekly Globe. Usually I am called upon for a few comments, but this time the interview was printed in full (28 April 2017) so I have shared it below.

The Malawi Government is looking at mining as one of the sectors for increased investment for economic growth. As government’s attention to the sector increases, so are activists keen on ensuring that mining in Malawi’s doesn’t become a resources curse it has been. Our reporter David Makasu spoke with Rachel Etter-Phoya, Head of Accountability, Policy and Programmes at Citizens for Justice. Etter-Phoya also runs http://www.mininginmalawi.com.

Malawi’s mining sector does have potential, but we have to qualify the statement. Expectations were high a few years ago because of the high prices for commodities, largely driven by a demand from China. Malawi has many mineral resources but far fewer of these have been explored to understand if it is worth it for a company and the country to go ahead and extract. Simply put – samples have to be taken from the ground to a laboratory to understand how much of a particular resource is available and then a feasibility study can be developed that looks at potential revenue and the costs of producing a mineral from a particular area to see if profits can be made. I think there is potential particularly for minerals that are useful for domestic use – such as producing limestone in Malawi (rather than importing) for agriculture. And a couple of companies also indicate they have found promising deposits of graphite in Lilongwe and rare earths in Phalombe. At the moment, challenges in and the cost of accessing reliable electricity and transportation are among the constraining factors for the sector.

The Government has focussed on improving the laws that govern mining and is introducing a number of needed reforms, which are to be commended. Tax amendments have already been introduced and the Mines and Minerals Bill, to replace the 1981 Act, needs to be tabled in parliament. It was expected to be tabled almost two years ago, so it’s important for government, citizens, and companies alike that this is presented to our parliamentarians soon. The petroleum sector requires the same level of attention. In 2009, most of Malawi’s land and all of the lake was divided into six exploration blocks. Licences were awarded for all six blocks and three agreements were signed eight days before the last elections even though the model agreement on which these were based remained incomplete and the legislation is out of date. The Government said it has started worked on the policy with plans to finalise the model agreement and develop a new law, which is good, but this should have been in place before agreements were signed because these agreements could be in place for 30 years covering exploration and production of oil.

There are many possible answers to this. The high risks and upfront investment required in mining for potentially high rewards and the importance of accessing a particular licence for a particular mineral in a particular spot in a country increase the corruption risks. In the last few weeks, Global Witness revealed leaked emails that show Shell’s senior staff knew about a bribery scheme that they claim ‘robbed the Nigerian people of USD 1.1 billion’. Some of the concerns we have been raising about the oil and gas exploration in the country have been around corruption – three agreements were signed eight days before the last elections, against the advice of the Solicitor General, without completing an economic analysis of the fiscal terms, and behind the backs of senior civil servants. Why was this done? The Anti-Corruption Bureau is investigating payments made to Malawian entities in connection with the fast-tracked agreements, but very little information has been shared with the public.

The government has joined the Extractive Industries Transparency Initiative in a bid to improve transparency by making all contracts public, requiring the disclosure of the beneficial (real) owners behind companies, and reporting revenue it collects and asking companies to report revenue payments publicly. The initiative is managed by a multi-stakeholder group made up of companies, government and civil society. The first report is soon to be launched. But this is not enough. Transparency in and of itself is often only as effective as the people using the information to hold government and companies accountable. The initiative can also be used by government officials to ensure that appropriate revenue is collected and managed well and helps build trust in companies. The Nigerian government managed to recover over USD 2 billion from the sector through the initiative. The same goes for our legislation, of course, we can have solid legislation and regulations, but without enforcement, they are of little use.

Artisanal and small-scale mining (ASM) both supplements household income and supports Malawi’s construction and agricultural sectors. More can be done to create a business environment that fosters and encourages small-scale businesses, and through formalisation, the ASM sector can be assisted in accessing capital and improving its environmental footprint. Our National ASM Policy has remained in draft form since 2014 and we continue to struggle with the smuggling and under declaration of stones. More work needs to be done in auditing minerals leaving the mine (for large-scale mining in assessing revenue owed) and country. The recent ivory found in Thailand had been exported from Malawi as rough stones.

We need to ensure the government departments responsible for monitoring and enforcing regulations are well resourced with enough personnel, finances, and equipment, and are protected from political or corporate influence. There are certain no-go areas and Lake Malawi National Park, a World Heritage Site, is one of them. We need to think through alternatives and future possible uses of an area or water body beyond extraction because the main benefit for a country from oil tends to be revenue, and the way the government has been managing our taxes and money it collects from businesses has not been exemplary. Does the potential revenue from oil, jobs and associated businesses for a limited period of time outweigh the environmental risk and risks to many people’s livelihoods, food and water, to future national development projects reliant on the lake such as for water for consumption and irrigation, and to the tourism industry? This is simplistic, but it’s hard to debate when we have limited evidence around these alternatives. But perhaps we are getting ahead of ourselves because oil exploration beyond surveying has not started.

Civil society’s role is varied. The Natural Resources Justice Network and Publish What You Pay Malawi are not against mining but advocating for mining that contributes to sustainable development. Civil society should provide thought leadership on the way extractive industries contribute to the country’s development and advocate for reforms necessary to make sure this happens. It should hold government, leaders, and companies accountable in the way licences are issued, contracts are signed, mining is carried out, and revenue is collected and allocated. The proposed Mines and Minerals Bill introduces community development agreements that will be signed between a company and communities; civil society can provide a support to residents in these communities. In turn, ensuring coordination among civil society actors is really important.