Platinum metals exploration in Malawi has been associated with mafic to ultramafic rocks, sometimes associated with arnothosites. These rocks have been metamorphosed and it is possible that lateroregenic events triggered magmatisation of buried intrusive bodies. These are associated with irumide orogeny. This paper tries to documents target areas for exploration of platinum minerals including nickel, copper and chrome.

The platinum group metals are characterised by their denseness, hardness, high reflectivity and resistance to tarnishing. They have electrical conductivity and conduct heat. They promote chemical reactions. They have three main occurrences as follows: 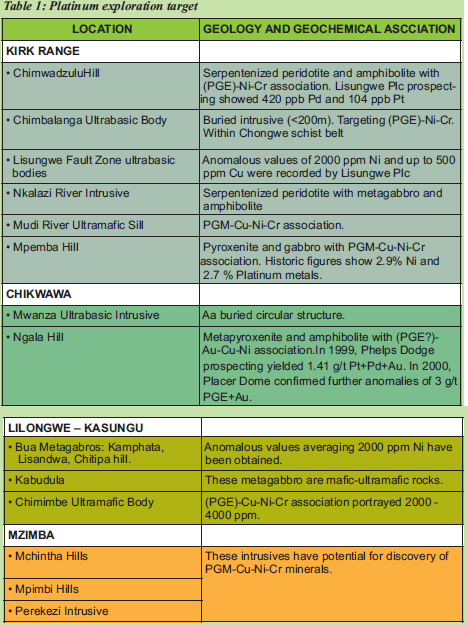 Platinum and associated minerals in Malawi have showings in mafic and ultramafic rocks.  A series of pyroxenitic and gabbroic rocks with serpentenite alterations have been found to contain Ni – Cr – Cu – Pt sulphide mineralisation. There is high potential to discover   economic deposits in Karonga –Chitipa area, Kasungu – Mchinji – Lilongwe plain, Ntcheu – Mwanza area and Blantyre-Chikwawa (Shire Highlands) area. Table 1 documents what was obtained in previous exploration works while Figure one shows the localities of these minerals. 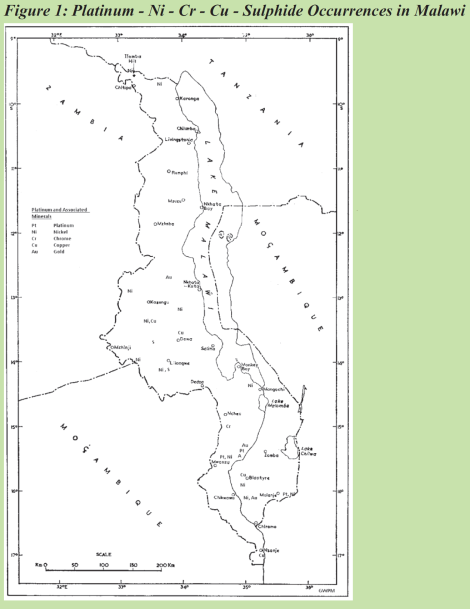 One response to “Technical file with Grain Malunga – Platinum in Malawi”